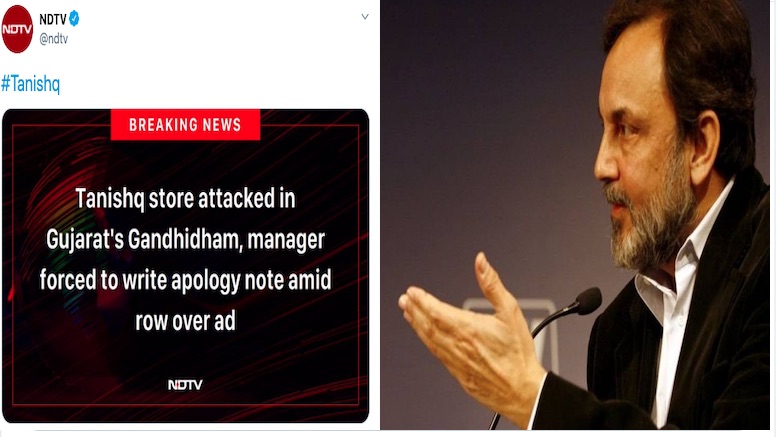 At 12:33 PM today, controversial propaganda outlet NDTV put out a tweet claiming a Tanishq store in Gujarat’s Gandhidham city had been ‘attacked’ amid a row over a recent Tanishq advertisement that has faced online criticism. 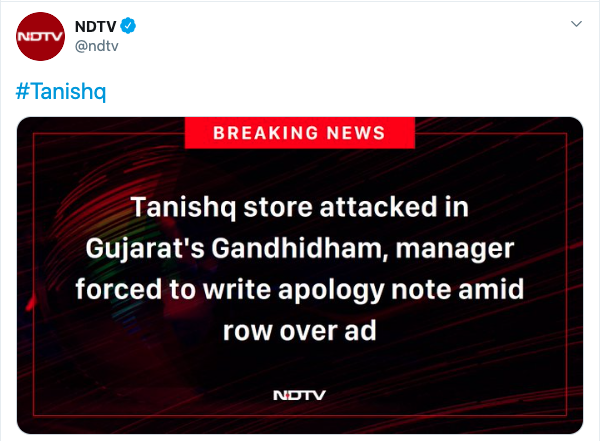 The SP of the area has confirmed that no attack, vandalism, ransacking of any Tanishq store has taken place and all such ‘news’ is fake and being peddled as propaganda.

NDTV has now changed the initial news story and replaced the word ‘attacked’ with ‘targeted’.

Meanwhile, Indian Express has quoted an anonymous store employee in their report to claim, “120 people gathered in front of the store, and 6-7 entered hurling abuses at the staff. They then pasted an apology letter on the show-room door and dispersed after clicking selfies.”

But even this is untrue, if we listen to the statement of Mayur Patil, SP, Kutch (East) as reported by ANI, “On Oct 12, two people came to Tanishq store in Gandhidham & demanded to put up an apology in Gujarati. The shop owner had fulfilled the demand but he was getting threat calls from Kutch. The news about the store being attacked are false.”

Rahul Manuja, manager of Tanishq store in Gandhidham corroborated the same and said, “The store has not been attacked. However, I received some threat calls. The police have supported us.”

It is to be noted that Tanishq had withdrawn the ad and posted an ‘apology‘ last night through their twitter account where they mentioned ‘well being of our employees, partners and store staff’ as one of the reasons for the withdrawal. Did NDTV and other Lutyens’ outlets decide to conjure up fake news of an ‘attack’ to make the brand’s fears appear true, and thus further their agenda of painting Hindus who protested the ad as ‘violent, lumpen’ elements?