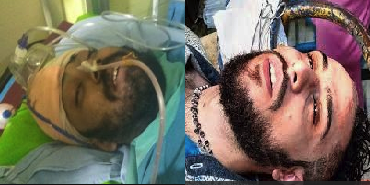 Being a doctor in West Bengal has turned into an extremely high-risk profession. The trouble started at the busy NRS hospital in Kolkata on Monday night after death of an elderly patient, Mohammed Sayeed (75).

Soon, around 200 men from Sayeed’s locality came on trucks and brutally started assaulting doctors. Two junior doctors were seriously wounded – Paribaha Mukhopadhyay who suffered a depression fracture in the right frontal lobe of the skull; Yash Tekwani who is also admitted in critical care with head injuries.

Screenshots of a FB profile under the name of Ali, reportedly the deceased man’s grandson, have been shared on social media which show the person talking about how his nana (maternal grandfather) was killed due to negligence of NRS Hospital doctors. Going by the FB profile, it appears this grandson has also stayed in Lahore, Pakistan & is a supporter of the Pakistan cricket team. After doctors across WB went on a strike to demand better protection from the Government, more attacks were reported from Burdwan where an intern Mayank Agarwal (22) was seriously hurt on the forehead and eye, and Midnapore where 2 PG students including a woman were heckled. There are allegations that apart from disgruntled patient families, outsiders and local goons affiliated to the ruling party were involved in these attacks on doctors.

CM Mamata Banerjee holds both the Health Minister and Home Minister portfolios in West Bengal. But instead of taking her to task for utter lawlessness prevailing in the state, the Kolkata-based newspaper The Telegraph chose to target BJP instead for ‘communalizing’ the issue.

Latching on to a statement by BJP leader Mukul Roy (ex-TMC) that “people of a particular community carried out the attack, and they belong to Trinamool”, this is what Telegraph’s headline says –

Yes, Telegraph is not bothered to find out how a 200-strong mob was assembled within hours (if this is not communal mobilization, what is?), or what action the WB police has taken (any arrests?) and why the CM is silent over such anarchy just kms from her official residence, while she has a strong opinion on any & every incident of mob violence in other parts of the country?

For them, and for every other left-liberal fraud in this country, the style guide while covering such incidents of Muslim mob violence dictates that you must suppress the identity of the attackers, and if possible, present the attackers as the aggrieved, peace-loving party instead as Telegraph has faithfully done in this case too. And while giving in-depth, empathetic coverage to Mohammad Sayeed’s family, Telegraph chose not to send any journalist to talk to the family of the young doctors who are battling for life.

That, ladies & gentlemen, is how one sets the narrative, and flips reality on its head.

In a similar incident from 2017, a 100-strong mob from the Muslim-dominated Khidirpur neighborhood vandalised the CMRI Hospital in Kolkata and beat up its staff after a 16-year old girl Saika Praveen died during treatment. The prime accused then was Jiauddin Sheikh (26) who had no relation to the deceased. Was that attack also not communal mobilization, dear Telegraph?