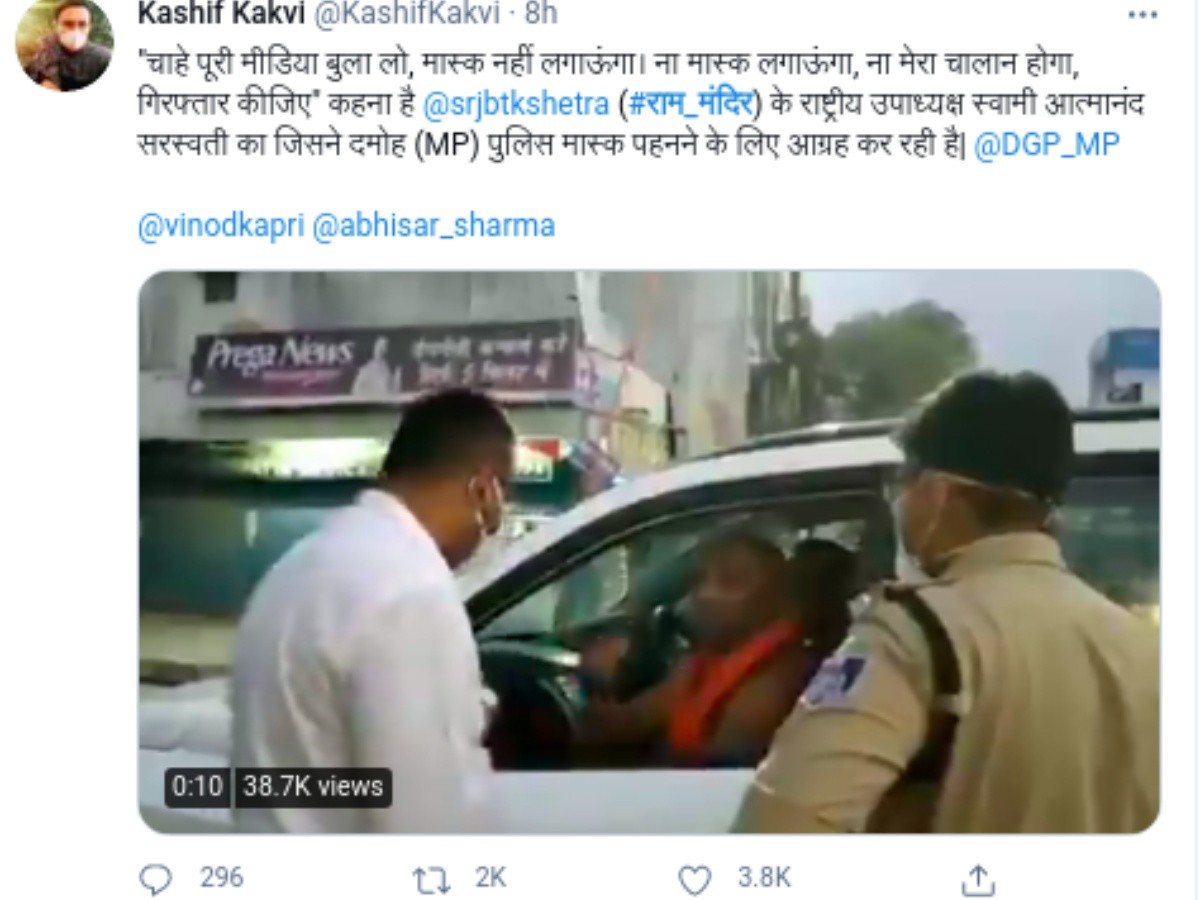 Journalists are supposed to bring truth to the people. However, it has been seen in recent times that journalists dish out misleading news to help their “side”. Many of these journalists are probably motivated by the imaginary “benefit” to their community or political ideology and many  by other perks.

Today, Kashif Kakvi, a journalist with News Click, who according to his bio also contributes to Al Jazeera, The Quint, Firstpost, The Wire, National Herald and others has made incorrect and defamatory claims about Ram Temple. He wrote on the social media website Twitter that “National Vice President of Ram Temple” Atmananda Saraswati refused to put on mask even after Police requested him. The tweet is as below:-

Interestingly, Kashif tagged a fake Twitter account of Shri Ram Janmbhoomi Teerth Kshetra Trust and wrote “Ram Temple” hashtag in brackets. The fake account however has the website of original trust in its bio. The website contains names of members of the trust and the list does not contain any Atmananda Saraswati. Saraswati might have been associated with some other trust with its goal as Ram Temple, but it has nothing to do with the current Trust or Ram Temple under construction.  Curiously, Atmananda is also described as Junior Shankaracharya of Jyotish Peeth, Kashi. However, according to widely accepted tradition, Jyotish Peeth is in Uttarakhand’s Joshimath and there is no current Shankaracharya on the seat due to a dispute on the same.

However, truth has nothing to do with agenda driven journalism. Kashif tagged journalists Abhisar Sharma and Vinod Kapri in his tweet. Abhisar is his colleague in News Click. Abhisar tweeted the misleading tweet of Kashif and amplified his lie. The same news was published by various media houses claiming that Atmananda is the vice President of Ram Temple trust. As of writing this news, Kashif’s tweet had around 2000 retweets and around 3800 likes in just 7 hours.

This is not the first time Kashif has spread fake news. On 28 April, he spread fake news that some Muhammad Yunus, “a topiwala” i.e Muslim, performed last rites of his “friend” Anubhav Sharma as Sharma’s family did not come forward to perform his last rites! This claim was investigated and found to be false! Interestingly, his tweet was also retweeted by Muhammad Zubair, the POCSO accused founder of AltNews, a website that claims to fact check, but whose founders often spread fake news.

The tweet of Kashif hurts the reputation of Ram Temple and its trust. He has been a journalist with multiple news portals and newspapers, thus his tweet is an example of either incompetence or lack of journalistic integrity. Given the repeat performance in two days, I am inclined to go with the latter.

Unfortunately, journalists lacking integrity has become the norm in recent times. From big anchors of news channels to youtuber “journalists” and “fact checkers”, all have shown willingness to play fast and loose with the truth to score points for “their side”. Lack of any adverse action by the media owners and law means there is a moral hazard where journalists are not responsible for such actions, which can actually have serious consequences. This is time that government brings a wide ranging law to put an end to his menace.