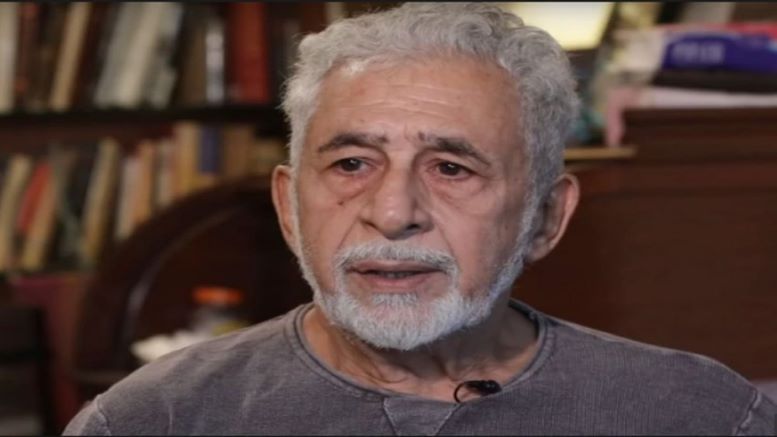 Naseeruddin Shah recently found that all that it takes to be canceled by Islamists is demanding reforms in Islam. Shah faced a backlash from Islamists for his video where he is seen ‘condemning‘ those celebrating the victory and return of the Taliban while talking about ‘Indian Islam’.

What did Shah say?

In the video, Shah says that Muslims in Bharat shouldn’t be celebrating the return of the Taliban. He also emphasized the separate identity of Bharatiya Muslims. Shah says in the video “Even as the Taliban’s return to power in Afghanistan is a cause for concern for the whole world, celebrations of the return of the barbarians by some sections of Indian Muslims are no less dangerous”.

He questioned Muslims of Bharat as to whether they want modernity or would prefer going back to barbaric times. Shah added that Hindustani Islam is different from the Islam practiced across the world and that he prayed that a time won’t come when that fact isn’t recognized (of Bharatiya Islam being different).

Hardcore Islamists slammed Shah for his comments and wanted him to stick to acting. Rifat Jawaid suggested that a non-practicing Muslim had no right to demand reforms in Islam. While the same brigade never tires of lecturing Hindus about ‘Brahminical patriarchy’ even though they have zero knowledge of Hindu Dharma.

Not to be left behind, alleged journalist Saba Naqvi questioned why Bharat’s Muslims were being asked to condemn the Taliban.

Arfa Sherwani tweeted that Allah and not humans were to decide who an ideal Muslim is. Echoing sentiments of a majority of Muslims, Bharatiya Muslim digital news platform The Cognate made it clear to Shah that there is only one Islam.

Some wanted him to stop barking and others didn’t want one who doesn’t know Islam to talk about the religion. Islamists of all hues were unequivocal in their opinion that there is only one Islam and that Shah was not qualified enough to demand reforms in Islam. The diktat is clear – never criticize or question Islam.

Naseeruddin Shah has time and again revealed his Islamist face. Hindupost had highlighted the Islamist apologist in Shah last year.

Naseeruddin Shah has been making a lot of noise about ‘intolerance’ and seems to have really lost it after CAA was enacted to provide citizenship to persecuted refugees from our Islamic neighbours – he even tried to provoke the 3 Khan superstars (Shahrukh, Salman, Aamir) to speak up against CAA, by asking them “Haven’t you made enough to last for 7 generations?” Maybe Naseeruddin is upset that the true face of the barbaric Islamic Republic of Pakistan is now exposed through CAA, and what could be more painful for a Pakophile like him?

Shah had earlier opined that cows are more valued than humans in Bharat. He has often ranted about ‘intolerant’ Hindus and spewed venom at will against the country, especially after Narendra Modi became the PM.

In a 2018 interview, Shah had said “I feel anxious for my children because tomorrow if a mob surrounds them and asks, ‘Are you a Hindu or a Muslim?’ they will have no answer. It worries me that I don’t see the situation improving anytime soon…These matters don’t scare me, they make me angry. And I feel every right-thinking man should feel angry, not scared. This is our home, who dare evict us from here?”

Incidentally, Shah was one of the ’eminent persons’ wanting terrorist Yakub Memon to be pardoned and had petitioned the President for the same. Soft Islamists like Shah, left-liberals and HINOs like Swara Bhaskar are merely useful idiots for Islamists who’ll get cancelled the moment they stop toeing their line.