Is Train Derailment The New Terror Weapon Against Bharat? 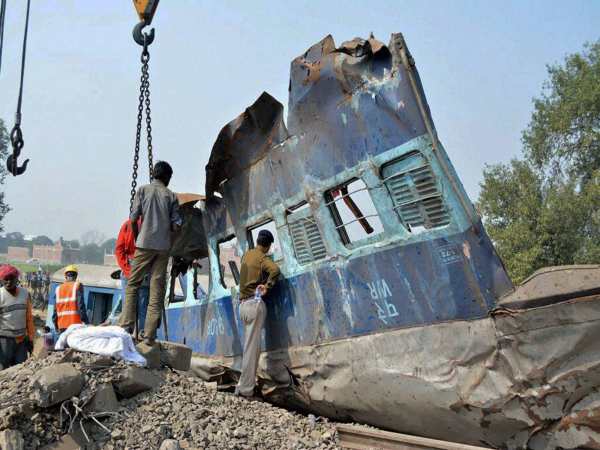 Train accidents are unfortunately not new to Bharat, but what is new is the unravelling conspiracy by #BreakingIndia forces to sabotage railway tracks to derail trains and kill innocent civilians. The ascendancy of a strong, nationalist Government in 2014 has put these enemy forces on the backfoot after the ease with which they were operating during the 2004-14 period, and it appears that they have opted to utilize their deep networks within Bharat to hit at soft targets like unguarded railway tracks in remote corners.

At least 27 people were killed and 36 injured after nine coaches of  the Jagdalpur-Bhubaneswar Hirakhand express derailed last night in Kuneru, Andhra Pradesh. This is the latest in a number of derailments which have occurred across the nation in the last few months, besides the accidents which were averted in the nick of time.

The worst train tragedy to occur was on November 20, 2016, when 147 people died while over 180 were injured after 14 coaches of Patna-Indore Express derailed in Kanpur Dehat district, UP. According to recent investigation, Moti Paswan, Umashanker Patel and Mukesh Yadav, who were arrested by Bihar police for their involvement in the Kanpur train accident have confessed that they were working at the behest of Pakistan’s dreaded spy agency ISI.

Lets see what one of the most authoritative voices on various terrorist groups active in Bharat, investigative journalist Vicky Nanjappa, has to report –

“During Moti’s questioning, it was revealed that he was directed to plant a pressure cooker bomb on the railway track at Ghorasan near Motihari on October 1, 2016. He said that instructions came from Nepal based operative Brajesh Giri . He said that the module boss was Shamshul Huda  who is currently in Dubai.

While the pressure-cooker bomb was detected by villagers, Moti decided that it was time to change his modus operandi. He is said to have told his interrogators that they decided to target the Indore-Patna Express. This time around they decided not to plant a bomb on the tracks.

“I reached Kanpur with a gas cutter. A few hours before the train could arrive, I removed the fish plates (a metal bar that is bolted to the ends of two rails to join them together in a track) and the pandrol clips (used to fasten railway sleepers). Two others – Mohammad Zubair and Zia-ul – were with me at the time of the operation,” Moti told interrogators. For this operation, a sum of Rs 7.5 lakh had been deposited in Giri’s account. “I was paid Rs 50,000 for this operation. I was also told that soon I would be given an SUV and also a flat in Delhi,” Moti told the police.

The other two accused are currently being questioned. The NIA has written to the Home ministry asking for the transfer of the case.”

Nepal has long been a base for ISI, who take advantage of the porous Indo-Nepal border; underworld criminal Dawood Ibrahim also has a strong network there.  IM terrorist Yasin Bhatkal was arrested on the Indo-Nepal border near Motihari, Bihar; LeT’s Abdul Karim Tunda was arrested in Uttarakhand’s Banbasa area close to the Nepal border.

Nepal police has arrested a Nepal based ISI operative Mujhahir Ansari, who revealed that the plot to derail trains was hatched after the surgical strikes carried out by Bharat in September 2016. Ansari told the Nepal police that they were instructed by their module boss Shamshul Huda to avenge the strikes. Ansari’s interrogation has corroborated what Moti Paswan told Bihar police – that the first target was the railway track at Ghorasan near Motihari. After this plan failed when villagers detected the pressure cooker bomb on the tracks, they decided to target the Indore-Patna Express by removing the fish plates on the tracks.

Shamshul Huda is of Nepalese origin, and his extradition request from Dubai is under process by the Nepal government.

Here is an news report which shows how the pressure cooker bomb near Motihari was detected at the last minute on 1 Oct 2016, averting a major tragedy –

“The 75228 Raxaul-Sitamarhi diesel-electric multiple unit train had a narrow escape after cowherds spotted a pressure cooker bomb on the railway tracks in Jagiraha village near Ghorasan railway station on the East Central Railway’s Raxaul-Darbhanga section this morning. Maoists suspectedly planted the bomb. The train had left Ghorasan station and was about the spot where the bomb was planted.”

On 31 Dec night, 2 days before a massive rally by PM Modi in Lucknow, some unidentified men damaged railway tracks in Mandhna near Kanpur – around 40-50 metal clips from the railway track had been opened and the tracks had also been damaged. The miscreants fled as soon as a patrol team arrived.

Thus, there is clear evidence which show ISI involvement in the biggest train accident in recent years, their hand in another attempt in Motihari, and one more attempt by unidentified persons in Kanpur.

It is very much in the realm of possibility that yesterday’s Hirakhand express is also an act of sabotage – Naxalites and ISI terrorists have been known to work in close coordination and copy tactics.

However, the anti-Hindutva elements who have a stranglehold on our media did not lose an opportunity to train their guns on Rail Minister Suresh Prabhu, on the back of these recent derailments.

Let's hike train fares once again for more safety! Astonishing how no debates on channels on deteriorating rail safety under Prabhu! https://t.co/cS7XlOIHZj

Not a word from these two gentlemen on the confessions of the ISI module busted by Bihar police – a police of an avowedly ‘secular’ state ruled by Nitish-Lalu, not a ‘communal’ one like the MP govt where such police work can be dismissed as another Hindutva conspiracy.

But they ever ready to spew venom on one of the better performing rail ministers the country has seen in a long-long time. People like Shekhar Gupta would rather have Rail Ministers like Lalu Prasad Yadav and Mamta Banerjee who used railways as a vote-catching exercise, or likes of Pawan Bansal who had to step down after a corruption scam involving his nephew taking money for appointments to Railway Board.

Suresh Prabhu is attempting a complete overhaul of railways – to expand the network, remove unmanned crossings, and make it safer &  cleaner. To get an idea of the improved performance since Suresh Prabhu took over, lets looks at some key stats presented in the last railways budget –

Talk to anyone associated to railways – from reforming procurement, operations, accounting, grievance redressal systems, adoption of new technology – things are changing at a never before seen pace. But cleaning up the rot and crumbling rail infrastructure which Prabhu inherited is not an overnight job – and this is what our media rogues exploit. They know that public memory is short, and hence their attempt to manipulate public opinion by stressing on train accidents, while ignoring the deeper changes underfoot. And it is not as if rail accidents did not occur earlier  –

People like Shekhar Gupta, Rifat Jawaid (ex-BBC editor who now runs the AAP propaganda site jantakareporter.com), Rajdeep Sardesai are so blinded by their hatred for Hindus, that they will overlook even ISI sabotage and terror as long as their agenda of pulling down the Modi Government is achieved.