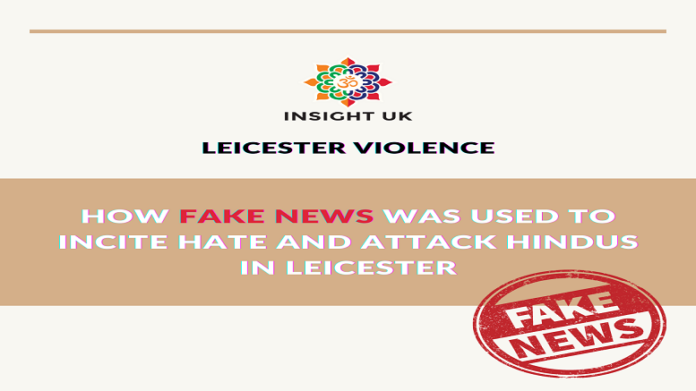 Over the past few weeks, Hindus, their homes, cars and Hindu temples in Leicester have been deliberately targeted and attacked. Violent attacks and vandalism of homes by Islamist mobs over 3 consecutive nights on the 4th, 5th and 6th of September, have left the Hindu community in Leicester afraid for their safety. What followed were two weeks of fake cases being filed against largely innocent Hindus by radical Islamists, rumours spread on social media and violence incited against Hindus in Leicester.

At least nine (likely more) Hindu families have felt the need to leave their homes due to the repeated attacks. Saturday 17th September was another dark night where Hindus were attacked, leaving many injured. On Sunday 18th September, Hindu businesses were attacked and around twelve cars were reportedly damaged.

Status as of now (02/10/2022): A few Hindu families are yet to return to their homes. Hindus have removed religious symbols from their homes, cars and properties. People are afraid to wear any religious symbols like Kalava or Tilak. Hindus who attempted to bring the truth out via the media and expose the radical Islamists have received threats. On one Twitter thread, it is reported that school children showing sympathy for the Hindu victims in the Leicester riots are being targeted and harassed. [1]

On Sunday 28th August, India cricket fans of multiple religious backgrounds celebrated on the streets of Leicester after India’s victory over Pakistan in the Asia Cup cricket match. After a ruckus when one person who was alleged to be drunk, snatched an India flag out of a fan’s hand, assaulting him and those around him.

In response, he was confronted by India cricket fans who were upset at the man’s abusive behaviour and disrespect that was shown to the Indian national flag. He was physically rebuked by a handful of cricket fans. A few of the India cricket fans tried to calm the man down and looked after him to ensure that the situation was under control.

Fans chanted ‘Pakistan Murdabad’, meaning ‘down with Pakistan’, in reference to the defeat of its cricket team at the hands of the India cricket team. No mention of Islam or Muslims were made. No political sloganeering was chanted. The cricket fans consisted of all faith backgrounds. [2]

An email sent on 31 August from the police (Chief Inspector Paul Allen) to the Leicester Council of Faiths, states that there were chants, “calling for (we believe) ‘death to Muslims’ in Hindi”. [3] This did not happen and there is no evidence for this. Some simple due diligence by checking the videos or consultation with the community for the translation would have provided this clarity. This careless and false statement was used by Islamists to incite violence against Hindus, on the basis of something which did not transpire.

Good morning all, I need to provide an important update regarding the allegations that we are investigating in relation to the cricket last Sunday.

On Tuesday afternoon it was reported that the chanting which had taken place, some of which was captured on video and was circulated on social media, included the phrases (in Hindi) “death to Pakistan” and “death to Muslims”.  We have investigated this and can find no verifiable evidence that there were any chants of “death to Muslims”.  This is significant in terms of the context and I would encourage you to share this with interested parties [4].

In spite of the appeal by the Police in the email to share this clarification widely, this was not widely shared, unlike the first letter which created unwarranted anger against Hindus and incited targeted attacks and violence.

Over the following days, Sunny Hundal (extreme left-leaning journalist, former deputy editor for the Independent), Guz Khan (comedian and actor), and many others on social media stoked the flames of religious hatred by falsely equating the cricket fans as Hindus, the Hindu community, and non-existent Hindu extremists. Warnings were made on social media that violence will soon be coming from the Muslim community. Nothing against Muslims or Islam had  been uttered, but the false narrative spread like wildfire [5].

Celebrations that took place following the cricket match in August later became disorderly, a police spokesperson said. “An incident was shared on social media stating that a Muslim was being attacked by Hindus. This was wrong – the victim was in fact Sikh and supported the same team as the people who assaulted him,” the spokesperson said.

“3 Indian boys got out and asked her if she was Muslim. She said yes and one guy tried to grab her.” [6]

The post was liked hundreds of times on Twitter after community activist Majid Freeman shared the story on September 13.

He also shared a message from the police which he said was “confirming the incident which took place yesterday [12 September]” [7].

But in reality, there had been no such incident of an attempted kidnapping.

One day later, Leicestershire Police issued a statement which said that “the incident did not take place” [8].

Majid Freeman later deleted his posts but the fake story kept being shared on other platforms.

In the East Leicester Disorder News published on 30th September 2022 at 15:03, Leicestershire Police confirmed that the report was false. The update on this states was: “On 17 September, a 28-year-old man, from Leicester, was voluntarily interviewed about a report he made to police on 10 September. It was claimed he was assaulted while working as a traffic warden. It was ascertained that this report was false. The investigation continues.” [12]

There were also claims that coach-loads of Hindus were entering Leicester to cause trouble. A video showed a coach outside a Hindu temple in London, with a voice saying the coach had just returned from Leicester.

The owner of the coach company later said he was receiving threats. He also stated that none of his coaches had travelled to Leicester.

The coach operator clearly stated that none of his coaches had travelled to Leicester in the past two months and provided evidence from the GPS tracker of the bus in the video showing it had remained in south-east England on the weekend of 17-18 September.

Fake story 6: Attack on a mosque

On the 17th of September, Leicestershire Police issued a statement saying that “We’ve seen reports on social media that a mosque is being attacked. Officers on the ground have confirmed this is not true.” [13]

Impact of such fake news:

The impact of targeted and deliberate fake news is clear to see. The Hindu community in Leicester were targeted, attacked and are now living in fear for their safety. Many families have left their homes that are in the so-called “Muslim area”, still waiting to return.

Many houses and properties of Hindus were damaged. Two Hindu men survived an attack with knives, many were injured including women and one man who was hospitalised and in critical condition.

The Hindus of the area remain in fear after weeks of violence and intimidation. The Hindus in the impacted area did not leave their house and did not send their children to school for 3 to 4 days last week. Some families have left their homes out of fear of violence, and are yet to return. The local Hindus have removed Aum symbols and the words ‘Shubh Labh’ from the front of their homes. Devotees of Mata ji, the mother Goddess, have removed any photos that were on display in their windows and cars so that the houses or cars cannot be recognised as Hindu s from the street to safeguard from the recurrence of targeted attacks.

A video has been shared widely where young girls are performing the traditional folk dance of Garba in public. In the video, a man using derogatory language raises a question as to why they are doing this in front of a Mosque. Garba represents a celebration of the feminine divine; to raise such questions is to demonstrate intolerance of other communities openly practising their traditions.

Incidents such as these are not new in Leicester. In July 2017, radical Islamists pushed a Hindu man carrying an India flag off his motorbike, causing him serious injury. No firm action was taken by the police then, and many more incidents are happening now.

Extremism has been a substantial blight on our society for decades, but it hasn’t come from the Hindu community. Unfortunately, the past few weeks clearly indicate that Hindus are fast becoming the biggest and most targeted victims of it. How are the authorities going to guarantee the safety of the Hindu community from extremists when serious violence can occur at any time?

[8] Leicestershire Police confirm no such incident of an attempted abduction of a Muslim girl occurred:  https://twitter.com/INSIGHTUK2/status/1570827009961623553

The BBC and The Guardian calling on a proven fake news pedlar and giving him a platform to further spread lies: https://twitter.com/INSIGHTUK2/status/1571808655577870337

(The story was published on insightuk.org on October 2, 2022 and has been reproduced here.)