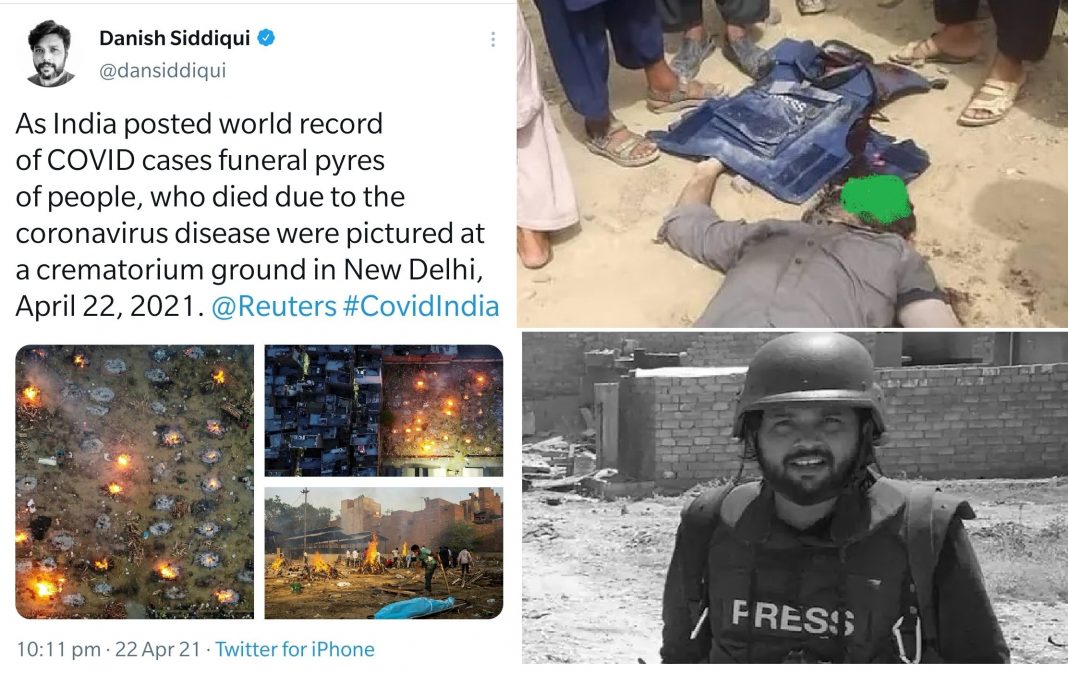 On 15 July 2021, Reuter’s photojournalist Danish Siddiqui was killed in Afghanistan while covering the ongoing clash between the Afghan army and Islamist trrorist outfit, the Taliban. The Pulitzer Prize-winning photographer was 38-years-old at the time of death and is survived by his wife and two children. He held a degree in economics from Jamia Milia Islamia, pursued post-graduation in Mass Communication and then started his career in journalism which he then utilized to the fullest to further his agenda.

Though he is being hailed as a ground-breaking journalist by the left-liberal cabal, Siddiqui had selected the profession to further his rooted hatred for the Hindus, the Hindu culture and the Hindu religion. Many try to establish his merit by citing that he had bagged the Pulitzer, however, an informed reader knows that the awards like Pulitzer or Magsaysay are all bestowed upon members of the fraternity to peddle forward the narrative set by these establishments. This is why, former US President Barrack Obama, who had created bloodshed in foreign lands like no other POTUS in the past was decorated with the Nobel Peace Prize.

Through his verified Twitter account, Siddiqui had affronted Hindu traditions numerous times. His hate for the Hindus predates the BJP government at the centre or Narendra Modi’s reign as India’s Prime Minister. In a tweet from 2012, the journalist makes a derogatory remark about Diwali celebrations. Hence, in case one pins his repeated offences as retaliation to the Hindutva party in power, the argument must be rubbished and canned immediately. The Hindu festival of Diwali remained a target of his loathing over the years and he had exposed his violent nature and absolute intolerance for the Hindu festival by openly stating that he wishes to punch the person who came up with Firecrackers. Curiously, for a person who apparently hates firecrackers, he used to get himself posted in conflict zones quite often. Perhaps, noise of gunshots, rockets and bombs is enjoyable as compared to that of firecrackers. Also, the five time daily noise pollution was never in thoughts of our devout Muslim hero.

The propagandist that the Jamia Milia Islamia University alumni had proved himself to be, tried to give a contradictory spin to the Anti-Hindu Delhi riots of 2020 to project to the world that the Hindus were cornering the Muslims in the streets of the capital city. He didn’t take pictures of the 20-year-old Dilbar Negi whose limbs were chopped off and tossed in the fire alive by Muslims, he didn’t fly drones above the roofs of mosques that stored heaps of stones, arms and ammunition to attack the Hindus. Instead, the jihad apologist photojournalist clicked a picture of a Muslim trying to loot Hindu shops and in retaliation being given the treatment that would ooze naturally from terror-stricken Hindus. He propagated this cunningly timed picture to different geographies to give the Hindus a bad name.

For a man that abhorred Hindu festivities – like Diwali – with a special passion, Danish found immense exhilaration in the sight of burning Hindu pyres. The Hindu pyres ignited a festive zeal in him that the lit lamps of Diwali failed to do. When the second wave of the Wuhan virus was tightening its grips around Bharatiya population, Danish flew drones above crematoriums to take pictures while mourning Hindus were crying for their loved ones. It is alleged that he sold the rights of these heart-breaking pictures of Hindu pyres to western media at handsome prices. He also posted these pictures on this Twitter account which were widely retweeted. Posting pictures of burning pyres from the Hindu crematorium not only satiated him but also helped in establishing the twisted narrative that the Bharatiya dispensation was incompetent in handling the crisis.

It was just a deceptive way of seeding anti-Modi emotions in the hearts of the Bhartiya people. His followers try to mitigate his malicious acts by stating that he was trying to create awareness about the situation. We are compelled to wonder why the awareness was being created only by showing Hindu pyres.

Were Muslims spared by Covid? Why didn’t we see pictures of Kabarastan on his Twitter handle? Is it because pictures of Muslim graveyards with lined up Muslim bodies wouldn’t have given Danish Siddiqui the sadistic pleasure ?

It is ironic that a man with an Bharatiya passport and an Islamist mindset, who lived to fuel Hindu hate in Bharat, was killed in an Islamic land, in a clash between two Muslim forces and the bullet that brought his end was fired by a Muslim. The fact that Danish supported Taiban as well as the Kashmiri terrorists has not been explained away just yet, but will soon be.

This is what he was. pic.twitter.com/IFk18ogkZ9

The news of his demise was received with mixed emotions in Bharat. While the liberal coterie cried rivers, a section of the Hindus, that had received detestation from the deceased, was happy by the news. They took to Twitter to establish the poetic justice that Danish’s death was. The celebrations of the Hindus on the death of a man who had celebrated the death of their near and dear ones was criticised by the Liberal-Islamists. As shorts of his dead body started to make rounds on the Internet, Danish’s co-ideologists condemned the act and demanded that these shots should not be shared for moral reasons.

Did you or Danish take permission from the families or colleagues of the people who died due to Covid, whose funeral pyres pictures you were selling? https://t.co/uWLlVBe9Xf

Where was this morality when Pulitzer Prize-winning Danish Siddiqui went about clicking, trading, and posting pictures of Hindu deaths for the advancement of his propaganda ? Why did these companions not stop the morally bankrupt photojournalist from stooping that low?

Islamist media personalities have stayed busy damning random Twitter users who celebrated Danish’s killing. These people had participated in the celebrations after the deaths of Atal Bihari Vajpayee, Sushma Swaraj, Arun Jaitley and Rohit Sardana. They must stay away from preaching because their own moral compass is long broken.

Liberal-Islamists have, not once, condemned the Islamist militant organisation, Taliban that was responsible for the killing, directly or indirectly. The Taliban has however come clean of having no hands in Danish’s death and expressed their sorrow on his untimely demise.  Magsaysay awardee Ravish Kumar sent “hazaar lanat”(thousand curses) on the “bullet” that killed Danish, but not a single one at Taliban.

The Modi-hating cabal is demanding that the Shah-Modi duo voiced out their sorrow for the death of the photojournalist who “died on duty”. However, the adjective “died on duty” would be too much of a stretch to describe Danish Siddiqui. He was a photojournalist working with a non-Bharatiya private firm and died on his task.

All in all, Danish Siddiqui was an Islamist that used his profession to establish his propaganda and his death in the hands of his co-religionists is a fine example of nature’s judgment, or, as they call it, poetic justice. The Hindus, whose emotions he has stamped on repeatedly, must be unapologetic if they feel nothing for his death.