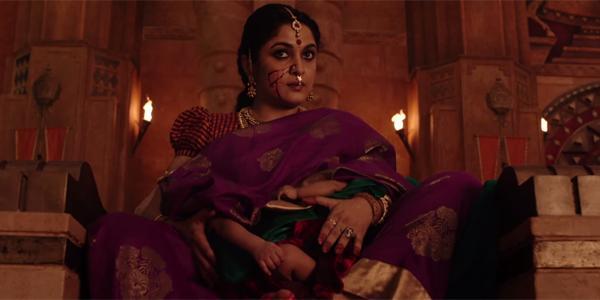 SPOILER ALERT: This is a discussion, not a review. This post doesn’t discuss the plot of the movie or the performance of the actors. However, it discusses a few observations made while watching the movie. So, it has spoilers. If you haven’t watched the movie yet and planning to watch it, do not proceed further.

Art is not what you see, but what you make others see.

To have a vision is one thing. To be able to translate it successfully into an appealing movie for others to witness the vision is a completely different ball game. In this sense, Bāhubali is undoubtedly a spectacular art with a top class execution with the available resources. Next time, when a Hindi film actress or a director says unnecessary physically intimate scenes are a part of the art or profession, they should think of Bāhubali once.

Apart from the fact that it’s a well executed movie, the beauty of Bāhubali lies in its symbolism, sometimes subtle, sometimes obvious. In ‘ The Beginning ‘, when Shivudu character promises avantika to bring back Devasena, the symbolism displayed by the director in the song that follows (Nippule Shvāsaga) are a series of things that happen before Shivudu enters the kingdom of Māhishmati.

First, he breaks a wall (PRITHVI). Then, a lightning strikes a tree and the tree catches fire (AGNI). Next, he jumps into water (JALA) following which, he climbs the fort walls and jumps from the top (read it as AKĀSHA), falls through air (VĀYU) and lands in the kingdom. The beauty in this entire scene lies in the subtle message that the character crosses Pancha Mahābhūtas to reach his destination i.e. Māhishmati. If one looks closely, he not only reaches his destination, he meets his destiny as well with all the five elements as witness. Subtlety of a beautiful symbolism such as this probably went unnoticed.

Devasena – a confident Kshatriya lady. She doesn’t step back when it comes to facing enemies or standing up against adharma. When enemies attack her kingdom, she not only doesn’t hide, but also fights them standing next to Bāhubali. Her convictions and clarity of thought every time she speaks up are too obvious to escape one’s attention. This character makes one wonder, this is probably how our warrior queens would’ve been back in the day. Luckily for them, they were probably busy empowering their subjects and had no time for nuisance like feminism. She being a princess of a kingdom and warrior herself, she chooses to live a humble life with her husband. A portrayal that says empowerment of a women isn’t a title to be conferred upon by someone outside, but it comes from within. Though Devasena is such a beautiful character, it’s Shivagāmi’s complex character that takes the cake for me.

It’s Shivagāmi’s portrayal that clearly shows how women can be multi-faceted. This character has more to it than what’s obvious. Be it her command when she asks the rebels to be killed or her sense of judgment when she announces Bāhubali as the king, be it her indifference during the upbringing of both the sons or her arrogance when she commands Devasena to marry Bhallāla Deva, be it her discomfort that her son takes the side of Devasena or her ego which doesn’t let her correct her mistake, Shivagāmi shows it all without making it explicit. The symbolism portrayed in her introduction is the icing on the cake. She takes up the affairs of the kingdom just when the vassals (Sāmantas) plan a coup. She not only suppresses the coup ruthlessly, but also feeds the babies immediately after that with the streaks of blood still on her face. It’s beautiful how the ferocity (with blood on her face) and tenderness (feeding both babies) of a woman is displayed at the same time in a single frame.

Back in the day, though inheritance was the common reason why an individual became a king, public approval was also an important aspect even going by the ancient texts. Lack of it is considered disrespectful though one continues as a king. Of course, this may not apply to invaders. Yet, this is observed in the history. This approval is what Malik Kafur lacked. Malik Kafur, who was instated to rule Anegondi that fell, found people too strong for him and eventually the region went back to be ruled by Hindus – Harihara and Bukka.[1] The oath taking ceremony of Bhallāladeva and Bāhubali shows the importance of public approval very clearly. The public approval for Bāhubali is earth shaking, literally and seen as an insult to Bhallāladeva.

Quite a few such symbolisms are very well captured like how Pindāris, who kill people by drowning them in the water, are in turn killed by getting drowned in the water – Karma!

Though the director of the movie, SS Rajamouli, maintained that he is inspired from Mahābhārata and though the movie has its own plot, a few things in the movie have resemblance with some events in the ancient texts.

Māhishmati – the name of kingdom

A sovereign of a kingdom with the same name was ‘Arjuna’, son of Kritavērya, better known as Kārtavērya Arjuna. A mighty king of his times. Just like how Kālakeyas, who notoriously invade others, get defeated by Amarendra Bāhubali, Rāvana, grown in arrogance having unleashed himself on devalōka, in the process of finding a worthy opponent invites Kārtavērya for a fight. Kārtavērya effortlessly defeats Rāvana and jails him. A mighty king for a kingdom with a mighty name. Fair enough!

In ‘ The Conclusion ‘, when Pindāris attack the kingdom of Kuntala, Kumāra Varma hides behind a group of women to save himself. This is same as the story of a king by name Ashmāha. ‘Parashu’ Rāma who resolves to kill Kshatriyas for lack of their respect for gnāna and gnānis, starts his hunt with Kārtavērya Arjuna. While ‘Parashu’ Rāma is at it, he goes in search of Ashmāha, a Raghu Vamshi and an ancestor of Dasharatha Rāma. Having feared ‘Parashu’ Rāma, Ashmāha hides behind the cover provided by women exactly like how Kumāra Varma does. However, unlike Ashmāha, Kumāra Varma fights back Pindāris & earns his survival. Ashmāha survives merely because of the cover provided by women. That’s how he earned the title “Nāri Kavacha”

Last, but not the least – the episode of Queen in authority making a short-sighted promise blinded by love and eventually making her son pay the price by compelling him to leave the family. Does this ring a bell? Yes, it’s strikingly similar to the story of Dasharatha Rāma with a difference that Dasharatha realizes his mistake unlike Shivagāmi who refuses to accept her mistake. One more difference being, Rāma leaves the entire kingdom while Bāhubali leaves only the palace. While all this was going on in my mind comes the song “Dandalayya” whose lyrics describe how the citizens of Ayodhya would’ve probably felt when Rāma proceeds to forest. It felt as if this entire churn of emotions is taken from Rāmāyana as it is.

There was a time when the Telugu film industry came up with too many movies based on history or itihasas. Too many to even remember and makes one wonder if any other film industry in India made so many movies on itihasas or history or even Bhakti. This was THE thing during the times of NTR, ANR & specially Kāntā Rao, who was known for making movies based on folktales like Chandamama stories. With the advent of new generation of actors, things changed. The number of movies in this genre went down.

Producer Shyam Prasad Reddy, then, came up with Ammoru, a mythological fantasy, that brought VFX to Indian films. This movie started the trend of making movies based on Bhakti in the Telugu film industry again.

No wonder Bāhubali director, Rajamouli, thanked Shyam Prasad Reddy (producer of Ammoru) for his contribution to the Indian film industry. Similarly, the arrival of Bāhubali already set the ball rolling. We saw Rani Rudrama Devi and Gautamiputra Satakarni already. It’s probably more appropriate to say that it is the director SS Rajamouli, not Bāhubali movie, that set the ball rolling given Bāhubali is not his first attempt at this kind of movie making. He already made Yamadonga and Magadhēra in the past. Apparently, ‘Manikarnika’ in Hindi is planned to be released for the next year.

#Manikarnika – the queen of jhansi… pic.twitter.com/PS75FVJP0T

Overall, the movie is well made. All those commenting on VFX should watch Avatar, LOTR or even The Hobbit once again. Avatar was also appreciated because of the presentation. Their graphics weren’t great even after all the money they spent on those movies. The Hobbit has substandard VFX.

It is unfair to compare Bāhubali with these movies only because of the budget for those English movies. Can Hollywood produce movies, with this grandeur, with the same budget?

It’s heartening to see audiences of different languages embrace the movie. The craze for this movie brought the entire country together like how it happens during a cricket match or an Olympic event. Hoping to see more of these movies, with good content of course.

(This article first appeared at https://maanasamanthanam.wordpress.com/2017/05/06/bahubali-symbolism-references-and-revival/ and is being reproduced with the consent of the author Nitin Shambhu, who tweets with the handle @boringTinTin)