Recent developments suggest that elements within CPM led government in Kerala is trying their best to sabotage the investigation into gold smuggling and drug-running charges on ministers. In the meanwhile, the state government is allegedly using its police force and intelligence apparatus to confound the investigation and possibly destroying the evidence.

Concerned citizens and opposition BJP are braving heavy rains and the COVID to protest against the misrule of the govt., only to be beaten up mercilessly. The CM, who also handles the Home Department, is using disproportinate force to try and quell protests and using cruel iron-fisted tactics. Women protesters have been subjected to water cannons and beatings by the police force. CPM local goons are also working in tandem with the police in unleashing violence. However, the protests are showing no signs of stopping anytime soon.

Another minister implicated in scandal

In the meanwhile, recent revelations regarding another Minister and his family have rocked the politics in Kerala. EP Jayarajan, the Minister for Industries, and his son Jaison are now found to be uncomfortably close to Swapna Suresh. Photos of Jaison Jayarajan have emerged in which he is seen in the arms of Swapna Suresh while both seem to be enjoying themselves. The photos are allegedly from a video shot in 2018. 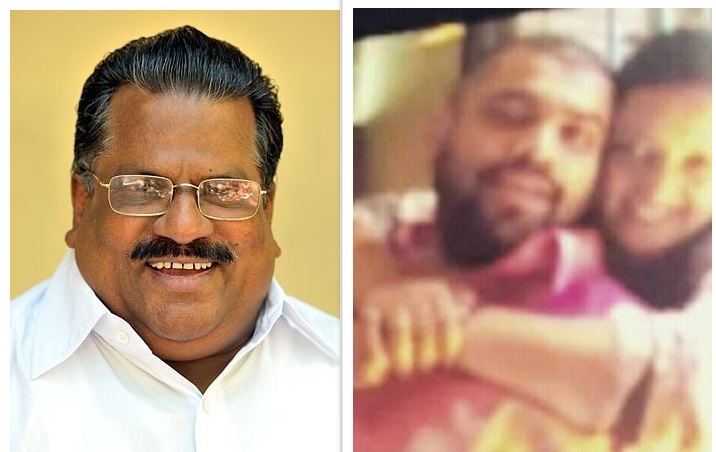 Jayarajan claimed that Jaison had visa issues in the UAE which were settled with help from Swapna when she was an employee at the embassy. Jaison, in turn, organized a party at a big hotel in Trivandrum for Swapna and her friends and the photos are from that bash. Jayarajan initially blamed another person of seeking revenge, but later retracted his allegation following pressure from his party.

It is now being alleged that the party was organized after closing the Red Crescent Life Mission deal which involves around 140 apartments and a hospital complex coming up near Trichur, and is funded by the UAE based Red Crescent. Jaison was reportedly the middleman in these deals.

It was earlier revealed that one crore rupees seized from Swapna’s bank locker were kickbacks she received from local contractors for arranging real estate deals for charities based out of UAE. Several suspicions are also raised as to how the Kerala Government had permitted receipt of foreign funds in violation of several laws of Bharat from Red Crescent, a UAE based charity.

The deal was worth 20 crores and it is alleged that 9 crores went into corrupt hands from which Jaison too received a share. There are several such projects in different stages of completion all over Kerala. Why would the UAE government invest in charities is something that investigating agencies are now interested in knowing from ministers inlcuding  KT Jaleel, who has also been an ex SIMI activist.

The photos and allegations against Jaison came out on the 9th of September. The very next day both Jayarajan and his wife PK Indira were confirmed to be infected with the Chinese virus. Indira herself an ex-employee of the Kannur branch of Kerala Bank gave her samples for testing, went to the bank, opened her locker and only then did she go home. By afternoon it was confirmed that she was carrying the virus and was shifted to the hospital. Other employees at the bank have since been quarantined. The urgency shown to open the locker has raised suspicions considering the fact that her explanations have not been satisfactory.

Earlier it was found that Bineesh Kodiyeri, the son of Kodiyeri Balakrishnan (CPM General Secretary) had dealings with a drug cartel involving many of the same characters that were in the gold smuggling gang. Bineesh has been questioned by central investigating agencies and it is now confirmed that he has not been given a clean chit. Another son Binoy Kodiyeri too had financial disputes with UAE citizens and it is alleged that the same were settled out of court.

It has been revealed that both KT Ramees and Swapna Suresh, the main conspirators in the gold smuggling ring were taken to the same hospital immediately after KT Jaleel, the minister of minority affairs and higher education was questioned by the Enforcement Directorate. Jaleel is accused of smuggling gold in bundles said to contain copies of Quran from the UAE.

Swapna complained of chest pain while Ramees had a weak stomach on the same day. They were both taken to the same hospital near Viyyur Central jail, where they are imprisoned. It is being alleged that they used cell phones and spoke to several persons while they were at the hospital. What raised suspicions is not just the fact that both of them were taken there together but the fact that both of them were confirmed to be fit and were discharged from the hospital which clearly shows that their illnesses were faked. Could this have happened without the cooperation of loyalists in the police department?

In a major embarrassment to the local police force, the NIA is planning to question six women police officers who while accompanying Swapna, had posed for selfies. Why would police need selfies with someone accused of anti-national activities? Would not their cell phones have been used by Swapna, who was treated as a celebrity in this case?

There are also allegations that the Kerala State Intelligence is trying hard to derail the investigations. It was claimed that special branch officials were found lurking around the building when the Enforcement Special Director and an Assistant Solicitor General were meeting in Kochi. It is also alleged that phone calls of officers of central investigating agencies are being tapped and information is being leaked to the media by these special branch officials.

Three pages of Swapna’s testimony finding its way to left-leaning TV channels is a prime example of such activities, following which two customs officers were removed from the investigating team.

Meanwhile, KT Jaleel and various other CPM ministers are repeating the line that there is nothing wrong with distributing copies of Quran. The propriety of a government minister distributing holy books of a sect is in itself debatable considering the fact that we are a secular nation.  Consider Yogi Adityanath distributing copies of Bhagwad Gita. How much noise would that make in the news channels? What is even more suspicious is the fact that UAE is not a holy place for Muslims and there is no dearth of such holy books in Bharat. 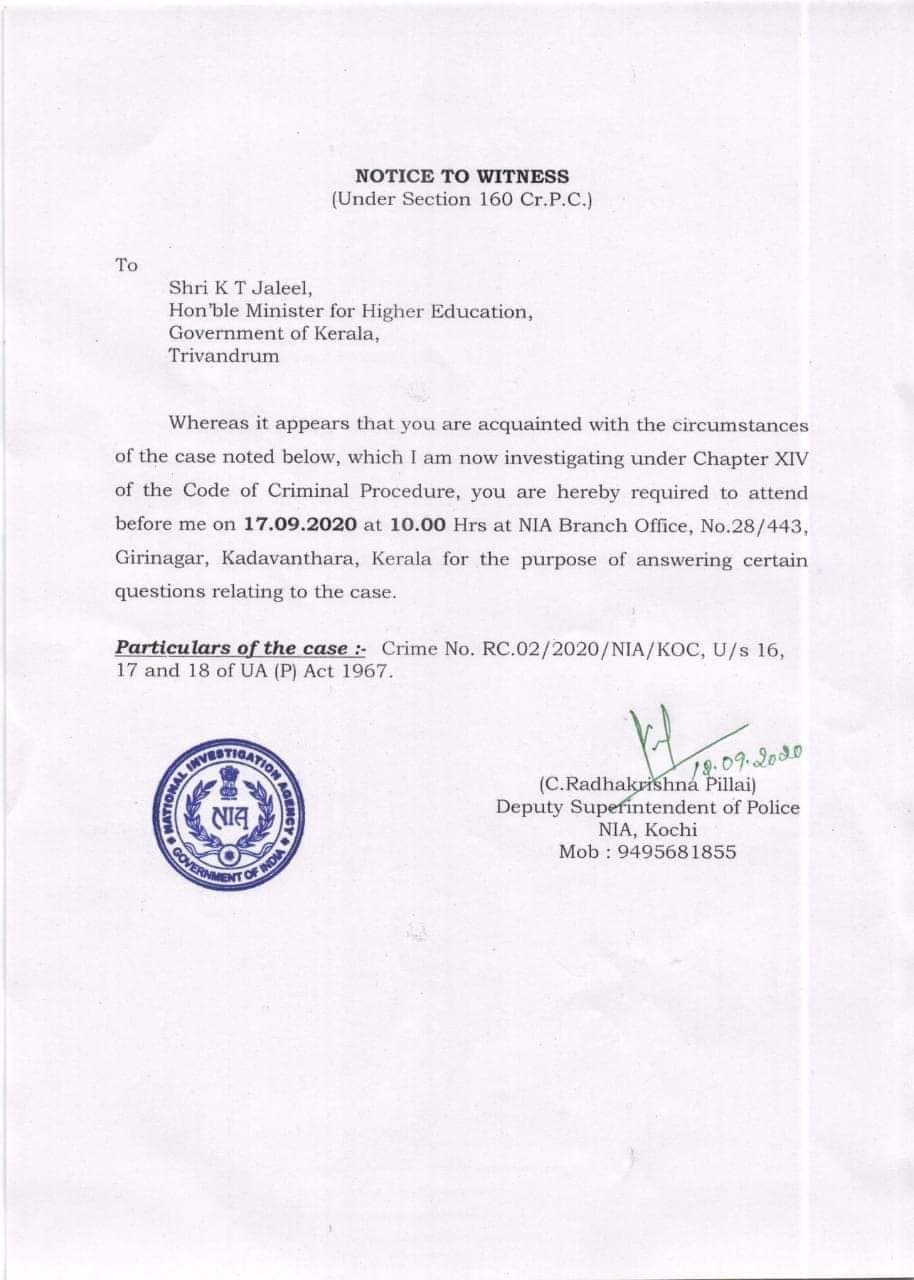 The charges mentioned in the letter above i.e. under section 16, 17 and 18 of UAPA Act, 1967 are connected to terrorism, aiding the terrorists and participation in a terrorist conspiracy. All of these are serious charges, with the circumstances of which Mr. Jaleel is apparently acquainted! Unlike what the CPM would want us to believe, there are serious charges against Jaleel.

As usual, the main opposition UDF which includes the Indian National Congress (INC) and the Indian Union Muslim League is trying its best to make use of this situation to its favor by showing opposition but is falling short with its cheap stunts.

VT Balram, the INC MLA from Thrithala found himself in an embarrassing situation where it was found that he had used red ink to mark himself giving the impression that he was hurt in police brutality. Another INC MLA, Anil Akkara from Wadakkanchery was found trying to visit Swapna when she was admitted to a hospital earlier this month. He is the sitting MLA in the area where the Red Crescent Life Mission proposed building is coming up. His explanation has not gone down well with the investigating agencies.

CPM is not in a position to oppose Jaleel and thereby lose whatever little fan base they have amidst Islamist elements. They have now stooped to communal polarization. Their only MP from Kerala is incidentally a Muslim, M Arif from Alappuzha.

A joint meeting proposed by multiple central intelligence agencies has been postponed until further notice in view of multiple recent leaks. Even with Ajit Doval monitoring the investigation and the Home Minister of Bharat seemingly interested in the case, communists are still able to “manage” the investigation.