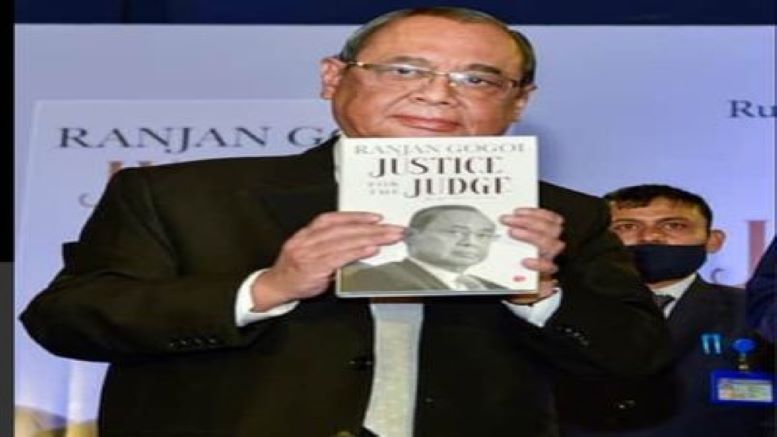 Ex-CJI Ranjan Gogoi has revealed in his autobiography the manner in which the judiciary has been arm-twisted by the Lutyens cabal to do the latter’s bidding, at times through threat of impeachment and at others by fabricating sexual allegation charges. The ex-CJI has made the revelations in his autobiography “Justice for the Judge”.

CJI Misra who was presiding over the bench then hearing the case declined to adjourn the hearing to 2019. In his own way, he made attempts to go ahead with the case. But sometime in April-May 2018, the impeachment episode cropped up. Many believed that the impeachment move was calculated to prevent CJI Misra from hearing the Ayodhya case. Whether there is any substance in this is not within my knowledge. However, I find some commonality between such thoughts and views expressed in such quarters that the events narrated in the earlier chapter could have been similarly calculated with not only the Ayodhya hearing that was due shortly, but also the ongoing hearing in sensitive cases like Rafale and NRC in mind. The only difference is that while the first move (involving CJI Dipak Misra) succeeded, the second one (involving myself) did not.

Interestingly, Gogoi was among the four senior SC (Supreme Court) judges who held a press conference against then CJI Misra criticizing Misra’s style of administration and claiming ‘independence of the judiciary was in peril’ as they were being bypassed while assigning benches for crucial cases. The ostensible trigger for this move was the benches constituted to hear the medical college scam (controversial activist-lawyer Prashant Bhushan leveled direct corruption charges against CJI Misra in this case, soon after the 4 judges presser), and the PIL over judge BH Loya’s death.

Even though the ex-CJI suggests in his book that vested interests were at play, it must be mentioned that Congress had succeeded in pressurizing Misra. Kapil Sibal had wanted the RJB hearing to be postponed until after the 2019 Lok Sabha elections.

While pointing out that there were attempts to arm-twist him as well using sexual harassment charges, Gogoi writes that he ‘regrets’ being part of a bench that heard his case suo moto.

The ex-CJI states “In hindsight, I should not have been a judge on the bench (which heard alleged sexual harassment case against him). 45 years of my hard work in bar and bench was being spoiled. It might have been better If I was not part of the bench. We all make mistakes. No harm in accepting it”.

“This unscheduled hearing on Saturday, which has been much talked about, was extremely short. In fact, there was no hearing at all. I expressed my indignation at the allegations and maintained that it was an attempt by certain unknown quarters to jeopardize the functioning of the CJI. At the end of the hearing, a very innocuous order was passed”, the ex-CJI highlights in his autobiography.

Part of press conference against then CJI Misra

He writes in this regard:

12 January 2018 was a Friday, a miscellaneous day. Immediately after miscellaneous work, around 12 noon, I went to Justice Chelameswar’s residence. What I saw there shocked me: the press was in full attendance, several cameras were set up on the back lawn of his residence, which was the venue of the meet. Outside there were several OB vans.

I did not expect this; what I had understood by Justice Chelameswar’s expression ‘let us meet the press’ was a meeting with a few/some journalists. Anyway, there was no way out now. Not that I wanted to make a retreat; I had committed to addressing the press and I believe till today that, given the circumstances, it was the right thing to do, though very unusual.

Former CJI Gogoi had earlier stated that Congress leader Kapil Sibal had attempted to meet Gogoi at his residence after the press conference in order to seek his support for the impeachment motion against then CJI Misra. However, Gogoi said he didn’t permit Sibal to enter his house.

The Lutyens cabal has often bullied the judiciary into submission be it knocking the doors of the SC at midnight or getting the apex court to do their bidding in relation to its decision to take over cases related to the Chinese Virus pandemic pending in various high courts (HC).

Even though the ex-CJI has come clean in his book, the fact remains that he himself made no efforts to break the stranglehold of those vested interests.