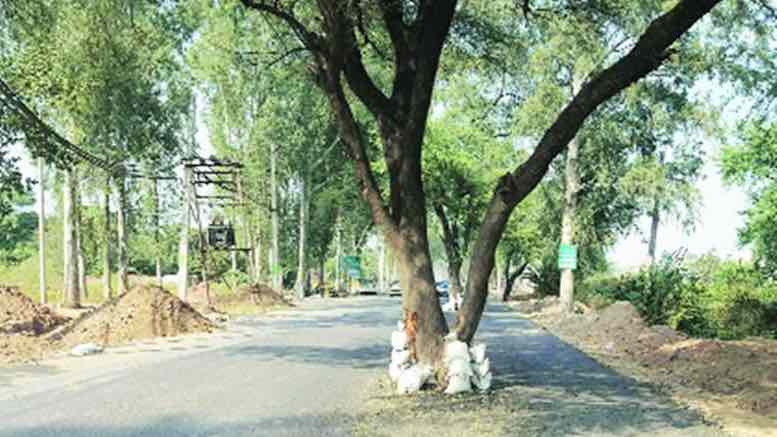 A Supreme Court bench led by CJI AS Bobde today questioned the need for straight roads if their construction involved felling trees, and argued why roads could not be zig zag as that would also reduce speed and thus prevent accidents and save lives.

The SC bench was listening to a plea by the Uttar Pradesh government to fell 2,940 trees for the Krishna Govardhan Road project in Mathura. As per a veteran journalist, the UP PWD had filed an application in 2017 for cutting down the trees and a Central Empowered Committee has already given clearance. It is not clear how the matter reached the Supreme Court.

The court observed that though UP PWD had assured that it would compensate by planting similar number of trees in another area, it could not accept compensation in merely arithmetical terms and PWD also needed to look at nature (shrubs or large trees) and age of trees being felled. The Chief Justice said that valuation of trees cannot be done just in terms of timber and they should be valued taking into account the cost of oxygen that the trees would have given over their natural life span.

“It is clear that the only effect, if the trees are retained, will be that the roads will not be straight and therefore incapable of high-speed traffic. Such an affect may not be necessarily deleterious,” added the bench.

Amicus curiae, advocate ADN Rao, also submitted that there was a NPV (Net Present Value) method of evaluation that the UP govt. needs to look into.

The case was adjourned for four weeks.

Last year, a plan to cut 2600 trees in Aarey colony to construct a car shed for the Mumbai Metro project had run into rough weather with dubious NGOs like Vanshakti protesting the project on environmental grounds. Despite MMRCL (metro authority) committing to plant 6 trees for every tree that would be cut down and Bombay High Court rejecting the pleas against the project, the matter reached Supreme Court. SC ordered there would be no felling of trees and asked Maharashtra government to maintain status quo. Finally this June, SC ruled against a plea filed by Vanashakti’s director Stalin Dayanand and allowed construction activities within the earmarked area in Aarey colony.

However, in October, the new Uddhav Thackeray government moved the Metro car shed from Aarey colony to Kanjurmarg, overriding the findings of an expert committee that such a move would lead to significant cost and time overruns for the Metro project and ultimately effect project viability.

Many such examples abound of how the green lobby, often funded through FCRA route by vested foreign interests, stymie development projects cleared by statutory government bodies and experts, by abusing PILs and courts.

The web of inter-connected, at times conflicting, laws governing these issues is another nightmare altogether.

Each state in Bharat has laid down rules and regulations against tree felling under the The Indian Forest Act, 1927. Permission has to be sought from authorities for felling trees even on private land. The centre is currently trying to convince all states to amend their state-specific tree preservation Act to waive this mandatory permission for cutting trees on private land, to allow corporate sector and individuals to start tree plantation on big scale for timber production, a commodity we are forced to import at the moment.

The closure in 2018 of the Sterlite copper smelting plant in Thoothukudi, TN, which accounted for 40% of copper manufactured in Bharat, is another case that highlights how dubious #BreakingBharat NGOs misuse genuine environmental concerns to incite violence and bully governments and courts, ultimately to the detriment of the common man. The shutting down of this one plant turned Bharat from copper exporter to importer in under 2 years.

Environmental concerns are indeed important, and reviving traditional Hindu and tribal practises that inculcate a sense of respect and awe for nature is one way of tackling the crisis, which mindless consumption and modernisation have created. But this has to be balanced with a need to improve the country’s infrastructure and provide a decent living standard to all citizens.

What is the need for having government bodies, expert committees and even a National Green Tribunal, when almost each and every development-related decision can be challenged by any busybody in courts and dragged out for years?