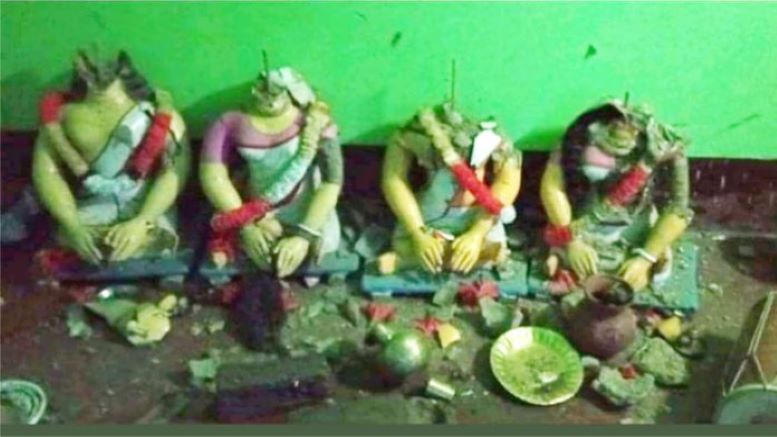 Images of the attack on a Hindu temple in Bangladesh shared by a Twitter user have been flagged as a ‘violation’ of Bharat’s law. Twitter has informed the user that they haven’t taken any action but have received a ‘request’ from the West Bengal government and police to take action against the said tweet.

An OpIndia report on the issue says:

On December 2, Twitter user MrSinha_ got an email from Twitter that they have received a complaint against one of his posts on their platform. In the email, Twitter said that Govt. of West Bengal, Office of the Assistant Commissioner of Police(III), Special Task Force, Kolkata had sent the request to take action against a particular tweet as it “violates the LAW of India.”

Though Twitter did not take any action on the tweet but mentioned that it was their obligation in the interest of transparency to inform Sinha about the complaint. The email was in a standardised format that it sends to every user against whom it receives such a complaint. In the email, the social media portal advised the user, in this case, Sinha, to take appropriate action in the matter to protect ‘his own interests’ that includes seeking advice from a legal counsel and challenging the request in court.

The complaint is in connection with an August 8 tweet where Sinha had published two pictures depicting how murtis of devis and devatas in a Hindu temple in Bangladesh had been destroyed by Islamists. In a tweet accompanying the picture, he wrote “This is what happens when Hindus become a minority. Hindu houses & Temples attacked & idols destroyed in Bangladesh. This news won’t attract ‘seculars/liberals’. Nobody is going to write letters to UN. No minority under attack type movements”.

These pictures have been used by several media outlets including Free Press Journal that published a report with an embedded video on August 9 with the same images shared by the Twitter user. The photographs were also shared by Dhaka Tribune in their report. The Tribune, The Week, the Commune were the other media outlets.

It is pertinent to note that while the Bangladesh police didn’t raise any objections, it was the West Bengal police that did so despite the fact that the incident didn’t take place within its jurisdiction.

Twitter has often suppressed Hindu voices on its platform. Twitter suspended the account of ‘Stories of Bengali Hindus’ for sharing ignored stories of the trauma faced by persecuted Bengali Hindus citing “violating rules against ban evasion” as the reason. However, the microblogging site has never controlled the communist-Islamist alliance that uses the platform for their propaganda.