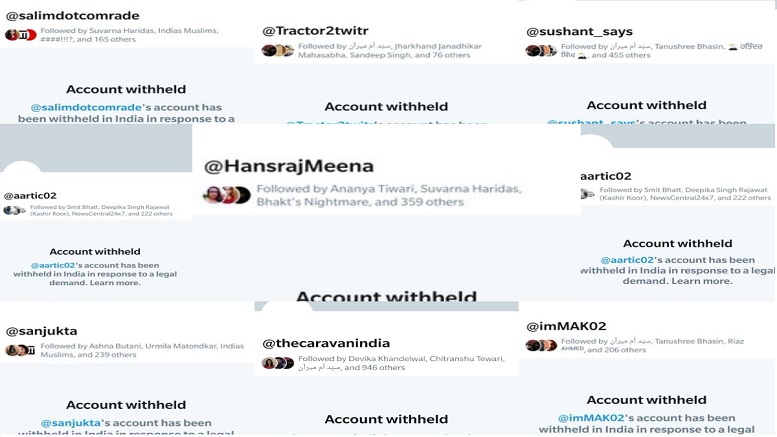 Last month, Twitter had permanently suspended the twitter account of US President Donald Trump. Donald Trump was finally de-platformed from almost all forms of social media over the internet. This action had led to a lot of celebration among the Islamist-Communist cabal in the US as well as in Bharat. The charge was that Trump was spreading misleading information about Presidential elections and thus, this action of Twitter was absolutely right.

We must express our thanks to POCSO accused Mohammed Zubair, who is also the founder of propaganda website AltNews, for preparing this list while going through immense emotional pain.

The accounts on being clicked showed the message that “account has been withheld in India in response to a legal demand.” Many more accounts linked to anarchists, Islamists and communists were withheld in Bharat.

Among the surprise names was Prasar Bharti CEO, Shashi Shekhar. Some users were seen discussing that this happened due to some confusion with the name of a prominent Congress leader. However, a statement by BJP MP Meenakshi Lekhi seems to indicate that this was a mistake on part of Twitter.

The message by Twitter indicates that some state or central government has requested them to take action based on definite evidence. By banning Trump, Twitter showed that it cannot be bullied by even the President of United States. Thus assuming that Twitter did this as it was threatened by Bharatiya govt would indicate that Bharatiya PM is more powerful than US President. Even Rahul Gandhi would agree that this is an absurd proposition.

Clearly, Twitter has taken this action on its own and Bharatiya govt at best made some documentary proof available to them. Twitter had in fact promised a global crackdown on fake news and harmful activity on its platform. In a recent blogpost, it had unveiled “Birdwatch” to stop misinformation. Most likely, the action of withholding the accounts may have come from a variety of factors and not just govt request. For example, it is well known that Caravan never deleted or took back the misleading tweet that indicated the death of a farmer in police firing. Indeed, Delhi Police has already registered a case against them. This probably makes them a fit candidate to be barred from Twitter for spreading misinformation. Almost all withheld accounts have spread fake news at some point or other in last few weeks.

This show of spine against fake news spreaders and hatemongers by Twitter is most welcome. One hopes that this is not a one off action, but “Swacch Twitter Abhiyan” continues to happen at a regular basis. It is almost certain that people will try to circumvent this in various ways. Some users on Twitter have already started giving people tips on how to access such accounts. It is incumbent on Twitter to take care of such accounts and also ensure that the withheld accounts are withheld in all jurisdictions like the account of Donald Trump. Also, many of these may try to come back in form of new accounts. Like in case of Trump, this must also be prevented by Twitter.

Free speech has to be used judiciously and abusive, misleading and hateful accounts should not be allowed to grow bigger. They may increase Twitter engagement, but they do great harm to the society. Defamation and incitement does not come under any definition of free speech. The constitution of Bharat has made it quite clear in the reasonable restrictions on the right to freedom of speech.

Update : A few hours after the accounts were withheld, Twitter mysteriously reversed its decision and restored all the accounts. It was probably due to the controversy it generated in leftist Islamist circles. This episode clearly demonstrates our position that Twitter is quite independent from government. Secondly, it also shows that it is dominated by organised hypocritical leftists, who ironically demand free speech for themselves, and often get it, while denying the same to others.