When 21 Brave Sikhs Stood Against 10,000 Afghans – Battle of Saragarhi 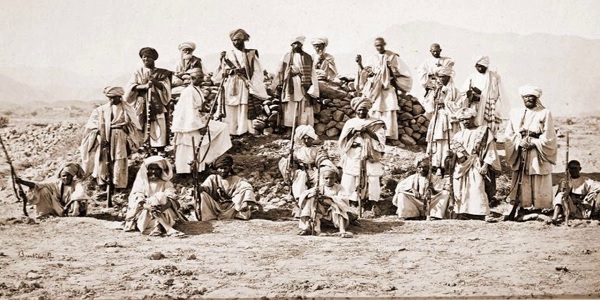 Today is the anniversary of the Battle of Saragarhi, one of the greatest last man standing actions in military history, when 21 Sikhs held off 10,000 Afghans against all odds, going down to the last man. It is a tale of sacrifice, honor and courage.

To understand the significance of Saragarhi, one needs to take a look at the backdrop. The Afridi tribe had a deal with the British to protect the strategically important Khyber Pass for 16 years, who in turn created a local regiment composed of the Afridis entirely. However the Afridi tribesmen, turned against the British, and began to capture all the outposts in the Khyber, especially, on the Samana Range near Peshawar. Saragarhi was one of the posts, here, manned by the Sikhs. The British started the Tirah campaign in response.

Saragarhi was a small outpost in Kohat, a border district now located in Pakistan, on the Samana Range, in what is called the Khyber Pakhtunkwa region, better known as NWFP. What is called as the Tirah region lies here covering Khyber, Kurram and Orakzai agencies. The Tirah region dominated by the Khyber Pass, is pretty much mountainous, inhabited mostly by the Pashtun tribes (mainly Afridi, Orazkai, Shinwari), and is the hotbed of Jihadi extremism currently. Most of the terror outfits are based here.

The 36th Sikh was an infantry regiment created under Col J.Cook, one of the many that came out, courtesy the Kitchener reforms. 5 companies of this regiment were sent to the North-West frontier, where Saragarhi was one of the posts, others being Sangar, Samana, Santop Dhar.

The North-West frontier was one of the most volatile regions, scene to continuous battles between the Sikhs and Afghans, later between the British and Pashtuns, and one of the hardest to gain control over. One of the few places where the British actually had to retreat.

Though the British had managed to gain control over the volatile North-West Frontier, they still had to face regular attacks from the Pashtuns. This region had a series of forts built during Maharaja Ranjit Singh’s time, primarily as a strategic defense against the Afghans.

If we take a look at the map, Saragarhi lies midway between Fort Lockhart (on the Samana Range) and Fort Gulistan (Sulaiman Range). It was set up as a communication post between these 2 forts, considering they were not able to directly communicate with each other. 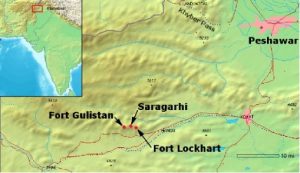 Saragarhi was preceded by a number of attacks earlier by the Afghans between August 27- September 11, 1897, warded off by the Sikh regiment. Attacks on the strategically important Forts Gulistan and Lockhart too were repulsed by the 36th Sikh.

Again if we look at the map, there is a reason why Afghans attacked Saragarhi, it was the only point of communication between Gulistan and Lockhart. If captured then, both those forts are cut off from each other, and that would make it easier to attack them.

Saragarhi was pretty much a modest structure, but it’s location as a midway communication point, made it absolutely vital. And the fact that there were just 21 Sikhs guarding it on September 12, gave the right opportunity to the Afghan tribesmen.

Around 10,000 Pashtuns descended on Saragarhi in hordes. Just 21 Sikhs led by Havildar Isha Singh, manned the fort. The next couple of hours were to witness one of the greatest “last man standing” acts in military history.

Sepoy Gurmukh Singh signals to Col Haughton located in Fort Lockhart, that they are under attack. The colonel however responds with his inability to send immediate assistance, due to the terrain and lack of personnel, leaving the 21 Sikhs on their own.

Left on their own, the 21 Sikhs decide to fight to the last to prevent the Afghans from reaching the forts. Bhagwan Singh was the first one to be killed, his corpse was carried back inside by NK Lal Singh and Jiwa Singh. Meanwhile, a portion of the picket wall was breached.

The leader of the Pashtuns entices the Sikhs to surrender, but in vain, and repeated attempts to break open the gate were unsuccessful. The wall however, was breached, and the Pashtuns rushed in, expecting to easily overrun the smaller Sikh force.

However, the outnumbered Sikhs put up the fiercest resistance to the much larger Pashtun force. Some of the most intense hand to hand fighting occurred at Saragarhi, as the Sikhs defended the post like a cornered tiger, not surrendering to the end.

Havildar Ishar Singh, ordered his men to fall back into the inner layer, while he faced the Afghans openly, like a true leader. However, the resistance was overwhelmed, as one by one each of the Sikh defenders was killed.

Sepoy Gurmukh Singh was the last to be killed. He was the one who had contacted Col Haughton for help. He, however, took down 20 other Afghans, and as he laid dying he repeatedly yelled out “Jo Bole So Nihal, Sat Sri Akal”, breathing his last like a hero.

21 Sikhs held off 10,000 Afghans, and ensured that the enemy side lost 200 of theirs. But more important, they delayed their advance to Fort Gulistan, giving time for reinforcements to arrive their. Their sacrifice did not go in vain. Naman to these 21 Heroes.

All these 21 Sikh heroes at the Battle of Saragarhi were from Punjab’s Majha Region, and were given the Indian Order of Merit. The epic poem Khalsa Bahadur, written by Punjabi poet Chuhar Singh is in the honor of this historic battle. 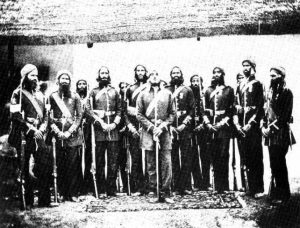 Lest we forget the heroes of the Battle Of Saragarhi :

Some of them had common names, but these 21 Heroes who held out to the last deserve to be remembered.

Two gurudwaras were built in honor of the 21 heroes of Saragarhi, one at Amritsar, another at Ferozepur, where most of these men hailed from. 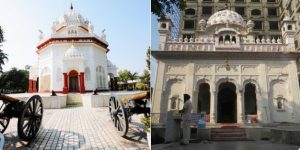 Bharatiya Army has been requesting a from long time to make the Battle Of Saragarhi a part of the school syllabus, as the heroism shown by the 21 Sikhs would be an inspiration to the school kids. Currently it is taught in all schools in Punjab since 2000.

Saragarhi Day, is commemorated today on September 12, in honor of the battle and the heroic sacrifice of those 21 men, by the Sikh Regiments, as well as by the Sikhs all over the world, while all units of Sikh Regiment, celebrate this as Regimental Battle Honors Day.

Saragarhi will go down as one of the greatest last man standing, courage under fire in the annals of military history on par with Rezang La, Thermopayle, Alamo, Charge of the Light Brigade to name a few. The heroism and sacrifice of those 21 Sikhs was against all odds.

On this date, lets take a few minutes to pay our own silent tribute to the 21 Sikhs of Saragarhi, who held back an army of 10,000 Afghans, delayed their advance, going down to the last man.

This article has been collated from the tweet thread of @GabbarSanghi