Sri Ramanuja: A personality who re-established the values of Hindu society 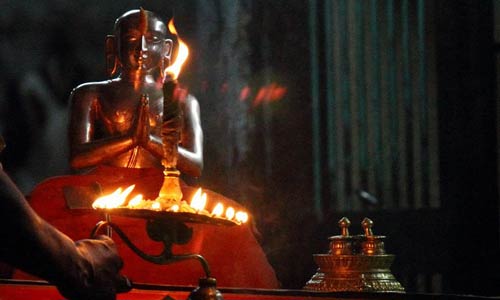 Sri Ramanuja is a traditionalist by conviction, revolutionary in ideas, faithful to the ancestral teachings, moderate in criticism and benevolent to all his devotees. Sri Ramanuja is well known as the great philosopher and Acarya of Sri Vaisnava Sampradaya. He was an exemplary character beyond parallel.

According to Sri Ramanuja, there is no distinction between high and low, between the touchable and untouchable, in the need for the quest for divine grace. The scholastic, philosophic, philanthropic, social, administrative and humanistic contributions made by Sri Ramanuja to the society in general and Sri Vaishnavism in particular are magnificent. Sri Ramanuja is revered by millions of people all over the world for his immense scholarship in the Vedantas, for his administrative acumen, acharya-bhakti, social consciousness and managerial ability.

Sri Ramanuja was not merely a philosopher. He was a great man who was deeply interested in promoting the good in society, one who was thorough with management techniques and put them to action.  A humanist to the core, he went beyond casteist hurdles and had immense love for the Supreme Lord and His devotees.  He proclaimed that all living beings had the right to gain Realization. Of all the religious thinkers, the great Ramanuja was entirely different in his spiritual approach. He was the only thinker who paved the way for the downtrodden to attain eternal bliss.

One of the famous Tamil poets, Bharathidasan, who is known as a ‘Puratchikavi’ and an atheist had sung in praise of Ramanuja, the English translation of which is as follows:

“At a time, when it was considered that Moksha can be attained by a handful of persons well versed in Sastras, it was Ramanuja who was born in Tamilnadu who declared that all who have devotion and render service to Lord & His devotees could attain Moksha”

Among the greatest philosophers of Bharat, Sri Ramanujacharya is a pre-eminent personality. He was not a mere Vedantin, an able reformer of Temple administration – both secular and religious, and a great authority on Ubaya Vedanta, i.e. Sanskrit Vedas and Tamil Vedas of Alwars. He worked for the social upliftment and reforms. He advocated service to mankind, especially to the poor and downtrodden. He preached ‘Universal Love’ and eradicated discrimination among human beings. It was his master plan in constructing the Thondanur Lake in Karnataka which is even today irrigating thousands of acres of land and supplying drinking water to nearby places including Thirunarayanapuram (Melkote).

He brought amity among Hindus & Muslims by agreeing to marry the daughter of Delhi Sultan with Ramapriya (the presiding deity Cheluvanarayaswamy at Melkote) and even performing the marriage as per Hindu tradition in presence of the Muslim ruler at Thirunarayanapuram (Melkote). Even today, that Muslim girl who wed the Lord is seen at the holy feet of the Lord.

He further stressed that as all beings are embodiment of God, they must be treated with kindness, affection and compassion. The essence of his philosophy is that the pathway to final good is the blissful experience with Brahman by way of Contemplative Bhakti. The unparalleled contributions of Sri Ramanuja have been protecting dharma all these years. Sri Ramanuja was an institution by himself. Sri Ramanuja’s contribution must be understood in the broader context of the civilizational challenges, and how he acted as a bulwark against insidious and external threats.

It is a sheet anchor reality that Sri Ramanuja set the standards for all Bhakthi and Social reformers. He was a pioneer in social, administrative, and religious reforms. He threw open the religious teachings to everyone, without reservations and was interested in reforms at all levels. None other than Swami Vivekananda praised Sri Ramanuja and the Acharyas of the Ramanuja tradition for their broad-mindedness and inclusive approach. Sri Ramanuja was well versed in the three aspects of Tamil; Iyal, Isai and Natakam as evidenced by Sri Ramanuja’s elucidations of the meanings of Azhwars’ Hymns.

Ramanuja stands first to give a dignified name to the down-trodden, who were called as untouchables. He named them, at Melkote, as “Thirukkulathar” meaning descendants of Mahalakshmi like other so-called upper class people. Four centuries after Ramanuja, Sri Narasimha Mehta of Junagarh (Gujarat) is the second to re-name them honourably as “Harijans”, meaning descendants of Bhagwan Vishnu (Hari) as all others.

Gandhi was very much influenced by the life of both these saints, who worked for the upliftment of the untouchables. He named his magazine as Harijan. He was very fond of his Gujarathi songs “Vaishnava Janato tene Kahia”. During Harijan Temple entry movement in 1930s, Gandhiji and his followers profusely quoted Ramanuja, who is considered to be the forerunner of this movement at Melkote (Mysore). Gandhi used to call him as “Famous Vaishnava Reformer”.

Ramanuja is also the pioneer to throw open esoteric doctrines to those who are desirous of them irrespective of caste, creed & colour. At Thirukkottiyur (Tamil Nadu) after hearing from his Guru Thirukkottiyur Nambi, the esoteric meaning of the Thirumantra (Eight syllabled ‘Om Namo Narayanaya’), he passed on the esoteric meaning to everyone who wanted to hear, which was against the wish of his guru that he should not divulge to others the meaning of Thirumantra without examining their desire.

“Without being in the least frightened, but with great humility Ramanuja said, “Mahatman! I have transgressed your behest…. If an insignificant creature like me goes to hell and thousands of men and women are thereby enabled to go to Vaikuntha, this is a consummation that I earnestly pray for…. what could be more propitious and profitable than this?…….”

There is monumental evidence in the temple of Tirukkoshtiyur in memory of this historical event for posterity. Great souls like Thirukkachinambi, Maraneri nambi and Pillaiurangavillidasar, who belonged to the Fourth class (varna) but who were revered on account of their wisdom and devotion are gloriously recorded in Vaishnava hagiology. Even now, most of the Acharyas in the tradition of Ramanuja have a grand set of followers from the Dalit community.

Sri Ramanuja’s style of functioning as executive head of the Temple – Job description, Conflict resolution, Risk management, Detailed plan of actions, Harnessing nature, Quality control, Honour to each service group, Resource management, Repairs and maintenance are well known. His superb universal management rules are applicable even today. Irrespective of caste, all sections of society had their place of pride in the hierarchy of the Temple order.

Sri Ramanuja had amazing ability of Time Management. He was known to get up in the wee hours and retiring late at night without taking any break during the day hours.  His schedule was so well set that after his personal aradhana to Lord Varadaraja in the morning, he used to visit and inspect Temple services, deliver lectures on the spiritual scriptures and also write books expounding the intricate Vedantic philosophies.

Sri Ramanuja was endowed with a special knack of recognizing merit. He always followed an inclusive approach, whether it be a case of Temple administration or writing a Vedantic work. Sri Ramanuja’s decision making process was based on (a) evaluative judgement (b) cognitive activities of memory (c) information processing (d) conceptual understanding (e) delegation of authorities  (f) feedback system (g) fall back arrangement. It is thus clear that Sri Ramanuja designed the Temple reforms on these management principles thousand years ago, well before the Western principles were evolved in 19th century.

Sri Ramanuja realised that there are three fundamental needs of a person in society. The physiological needs – food, shelter and clothing – are to be the satisfied first. To provide this, Sri Ramanuja evolved an institution – the Ramanuja kootams which provided the masses with food and shelter. Thus, Sri Ramanuja implemented Maslow’s theory of hierarchical needs in the 11th century itself. Sri Ramanuja motivated the common man to come to the Temple regularly. He arranged  for distribution of  the holy water, with Tulasi – Sundal (pulses), which enabled the growth of the body and a healthy life. The other needs of the individuals were fulfilled by offering special honours before the Lord and in the presence of learned people.

The ability of Sri Ramanjua to manage resistance to change was great. During the 1960s, Kirt Lewin, a famous psychologist, recommended a three step procedure to overcome resistance. But Sri Ramanujar successfully managed resistance – for example, he managed to convince the Hoysala Jain King Bitti Deva to follow Vaishnavism; the King was later known as ‘Vishnu Vardhan’.

Thus, it is clear that Hindu society which is accused of casteism and oppression by many left liberals, was never based on these malpractices but instead stresses on following a dharmic path to achieve liberation as shown by this great Acharya whose 1000th birth anniversary is going to be observed in a grand manner at his birthplace, Sriperumbudur on May 1, 2017.

(Note: This article is an extraction from the writings of SriVaishnavaSri A. Krishnamachari and is being republished here with the permission of the author. The feature image is from http://temple.dinamalar.com/news_detail.php?id=67401)