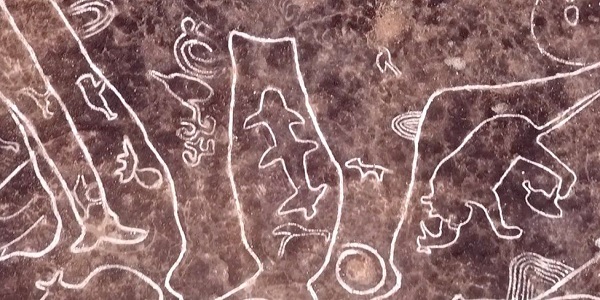 The discovery of rock carvings believed to be tens of thousands of years old in Bharat’s western state of Maharashtra has greatly excited archaeologists who believe they hold clues to a previously unknown civilisation, BBC Marathi’s Mayuresh Konnur reports.

The rock carvings – known as petroglyphs – have been discovered in their thousands atop hillocks in the Konkan region of western Maharashtra.

Mostly discovered in the Ratnagiri and Rajapur areas, a majority of the images etched on the rocky, flat hilltops remained unnoticed for thousands of years.

Most of them were hidden beneath layers of soil and mud. But a few were in the open – these were considered holy and worshipped by locals in some areas.

The sheer variety of the rock carvings have stunned experts – animals, birds, human figures and geometrical designs are all depicted.

The way the petroglyphs have been drawn, and their similarity to those found in other parts of the world, have led experts to believe that they were created in prehistoric times and are possibly among the oldest ever discovered.

“Our first deduction from examining these petroglyphs is that they were created around 10,000 BC,” the director of the Maharashtra state archaeology department, Tejas Garge, told the BBC.

The credit for their discovery goes to a group of explorers led by Sudhir Risbood and Manoj Marathe, who began searching for the images in earnest after observing a few in the area. Many were found in village temples and played a part in local folklore.

“We walked thousands of kilometres. People started sending photographs to us and we even enlisted schools in our efforts to find them. We made students ask their grandparents and other village elders if they knew about any other engravings. This provided us with a lot of valuable information,” Mr Risbood told the BBC.

Together they found petroglyphs in and around 52 villages in the area. But only around five villages were aware that the images even existed.

Apart from actively searching for them, Mr Risbood and Mr Marathe have also played an important role in documenting the petroglyphs and lobbying authorities to get involved in studying and preserving them.

Mr Garge says the images appear to have been created by a hunter-gatherer community which was not familiar with agriculture.

“We have not found any pictures of farming activities. But the images depict hunted animals and there’s detailing of animal forms. So this man knew about animals and sea creatures. That indicates he was dependent on hunting for food.”

Dr Shrikant Pradhan, a researcher and art historian at Pune’s Deccan College who has studied the petroglyphs closely, said that the art was clearly inspired by things observed by people at the time.

“Most of the petroglyphs show familiar animals. There are images of sharks and whales as well as amphibians like turtles,” Mr Garge adds.

But this begs the question of why some of the petroglyphs depict animals like hippos and rhinoceroses which aren’t found in this part of Bharat. Did the people who created them migrate to Bharat from Africa? Or were these animals once found in Bharat?

The state government has set aside a fund of 240 million rupees ($3.2m; £2.5m) to further study 400 of the identified petroglyphs.

It is hoped that some of these questions will eventually be answered.