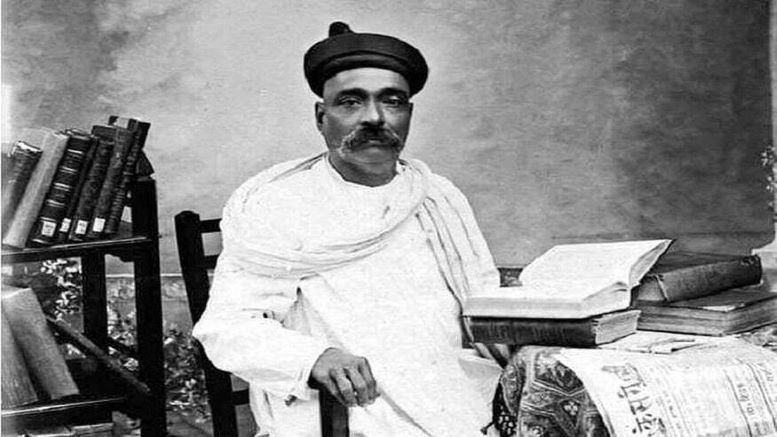 Lokmanya Balwantrao Gangadhar Tilak was one of the freedom fighters who emerged as a leader of the masses. His nationalism was rooted in indigenous Sanatana Dharma and he took inspiration from nationalistic heroes Chhatrapati Shivaji Maharaj. His clarion call for Swadeshi and clarity of thoughts inspired several young leaders including revolutionaries.

Tilak’s political philosophy was influenced by and closely linked with Hindu Dharma. He believed that theosophy was a means of bringing back to the Hindu fold those Hindus who had developed an apathy for Hindu Dharma.

Addressing a meeting on the importance of Hindu Dharma organized by Bharata Dharma Mahamandala, Tilak says:

“The word Dharma means a tie and comes from the root dhru, to bear or to hold. What is there to hold together, to connect the soul with God, and man with man? Dharma means our duties towards God and duty towards men, Hindu religion as such provides for a moral as well as social tie.

The term Sanatana Dharma shows that our religion is very old, as old as the history of the human race itself. Hindu religion as a whole is made up of different parts correlated to each other like so many sons and daughters of one great religion. If the idea is kept in view and if we try to unite various sections it will be consolidated into a mighty force.

A Hindu of this place is as much a Hindu as the one from Madras or Bombay. You might put on a different dress, speak a different language, but you should remember that the inner sentiments which move you are the same. The study of the Gita, Ramayana, and Mahabharata produce the same ideas throughout the country. Are not these a common allegiance to the Vedas, the Gita and the Ramayana our common heritage? If we lay stress on it forgetting all the minor differences that exist between different sects, then by the grace of providence we shall long be able to consolidate all the different sects into a mighty Hindu Nation. This ought to be the ambition of every Hindu.

When there is a decay owing to disunion, when good men are persecuted, then Shri Krishna comes down to save us. There is no religion on the face of the earth except the Hindu religion wherein we find such a hopeful promise that God comes to us as many times as necessary. After Mahomed, no prophet is promised, and Jesus Christ comes once forever. No religion holds such a promise full of hope. It is because of this that the Hindu religion is not dead.

Tilak was one who never minced words and even though he never openly supported revolutionary methods, he never regarded revolutionaries as political untouchables. Far from it, he acted as their godfather and maintained cordial relations with them. He believed that at some point in time, Bharatiyas would resort to arms in order to wrest their freedom. In that sense, he wasn’t an advocate of ahimsa (non-violence) either.

Lokmanya Tilak was skeptical about the Khilafat movement supported by Hindu leaders to win over the Muslims. Not only did Tilak want to keep the national movement totally free from any theological or foreign interference but also predicted that the Hindu leaders would be ultimately disillusioned.

He was also of the opinion that Muslims were very shrewd at diplomatic negotiations and hence Hindus would only be deceiving themselves by lending support to the Islamic Khilafat movement. He felt that support of the Muslims should be secured on the nationalistic principle of Swaraj and theology should never be brought into politics.

In the words of Shri Dhananjay Keer, Tilak was the most hated man in India by the bureaucrats, feared by the moderates, and suspected by the Muslims. He earned the title of Lokmanya on account of his popularity with the masses. He was a proud nationalist who had equal pride in his Hindu Dharma.

Hence, he never sought to appease the Muslims like Gandhi and several leaders of the Congress did which is made amply clear from his views on Hindu Dharma and Khilafat movement. Lokmanya Bal Gangadhar Tilak was born on 23 July 1856 and we salute this great son of the soil on the occasion of his birth anniversary today.