Hemu Kalani, the revolutionary martyred at 19 with a Bhagwad Gita in his hands 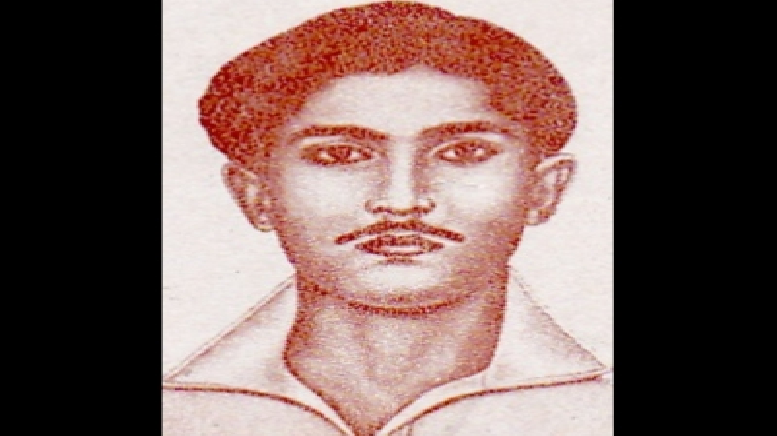 He was only 19 when he was hanged for attempting to derail an ammunition train and steadfastly refusing to betray his accomplices.

A leading member of the Swaraj Sena, a revolutionary student organisation, Hemu Kalani (March 23, 1923 to January 21, 1943) was one of the youngest revolutionaries to be martyred during Bharat’s freedom struggle, being executed by the British colonial authorities two months before his 20th birthday.

On August 21, 2003, Prime Minister Atal Bihari Vajpayee had unveiled a life-size statue of Hemu Kalani in the Parliament Complex. Prime Minister Indira Gandhi released a stamp in his memory on October 18, 1983 at the Viswa Sindhi Sammelan in New Delhi. There are also innumerable memorials in Kalani’s name at various cities in northern and western Bharat, including a Shaheed Hemu Kalani Savodaya Bal Vidyalaya in New Delhi.

His birthday coincides with the day Bhagat Singh, Sukhdev and Rajguru were sent to the gallows and as a child and young man, he campaigned with his friends for the boycott of foreign goods and tried to persuade people to use Swadeshi goods.

It is said that Kalani was so happy upon being handed the death sentence that, contrary to usual, he gained a good deal of weight during the time between his sentencing and his execution. On the day of his execution, he appeared extremely overjoyed and walked to the gallows with a copy of the Bhagavad Gita in his hands, smiling and humming the whole way.

The Quit India Movement had been declared by Gandhi on August 8, 1942, and inspired by his uncle, Kalani, born in a middle-class family residing at Sukkur in Sindh, who was highly influenced by the movement, joined the Swaraj Sena revolutionary organisation and became its leading member.

This outfit, at one of its secret meetings created a Revolutionary Command to undertake some drastic revolutionary deeds for removing the shackles of slavery from Bharat. Seldom would people of his age even think of doing something for the nation, but here was a student on the verge of appearing for his matriculation exam, fanatic to the cause of driving the British away from Bharatiya soil.

On October 2, 1942, the Swaraj Sena received secret information that a train carrying military personnel and hardware was to proceed to quell the political uprising in the North-West Frontier Province, where the followers of Khan Abdul Ghaffar Khan had created virtual hell for the British colonialists.

Kalani resolved to stop the ammunition from reaching its destination and decided to derail the train. He called an urgent meeting of his revolutionary group where it was decided that he along with two companions would remove the fishplates despite the fact that neither he nor his colleagues had the necessary tools and so had to use a rope as a means to uproot the fixings.

Unfortunately for the trio, the noise created by their operation reached the ears of the guards stationed in the area and on hearing the heavy footsteps of the guards, his two accomplices fled, but Kalani let himself fall into the arms of his captors.

Kalani underwent third degree torture by the Indian Imperial Police to reveal the names of his accomplices and the organization to which he belonged but refused to divulge any information and bravely bore the brunt of the repeated assaults on him.

He took the entire blame upon himself and stated to the authorities that if they believed their acts of subverting the freedom struggle with arms and ammunitions was justified, then so was his intended act of derailing the train.

Sindh at the time was under Martial Law and his case was referred to a Martial Law Court at Hyderabad/Sukkur, where the authorities tried Kalani for treason against the British Empire and sentenced him to life imprisonment.

But, realising the immense popularity that Kalani had acquired across the region and fearing that his act of bravery would have a huge influence on the minds of Bharatiyas, they decided to set an apt example to extinguish the expected flurry of patriotic emotions and enhanced the verdict to a death sentence.

Kalani’s brother Tekchand recalled later: “My father went to all the leading British men and begged for clemency. He even volunteered to be hanged himself in exchange for the life of his young son.”

An appeal for mercy was referred to the Martial Law Administrator, Colonel Richardson, by some of Sindh’s most influential citizens. Thousands of signed petitions were sent to the Viceroy to revoke the death sentence. Unfortunately, all appeals fell to deaf ears and were turned down.

Even as his parents and admirers ran from pillar to post, trying desperately to have his sentence altered, Kalani himself was a picture of calm and composure, unflustered by the prospect of losing his life, waiting for the D-Day when his name would be inscribed in the golden pages of history.

He breathed his last with a smile on his face, and the slogans ‘Inquilab Zindabad’ and ‘Bharat Mata Ki Jai’ on his lips. It is widely believed that when he was asked to state his customary last wish, Kalani, before having the noose tightened around his neck, wished that everyone around him, including the British official, raise nationalist slogans.

On January 23, 1943, Kalani’s mortal remains were consigned to the flames on the banks of the Indus with due honour, and the day is celebrated as Sindhi Youth Day and Martyrdom Day by Sindhis every year to keep his memory alive and to inspire the youth of today.