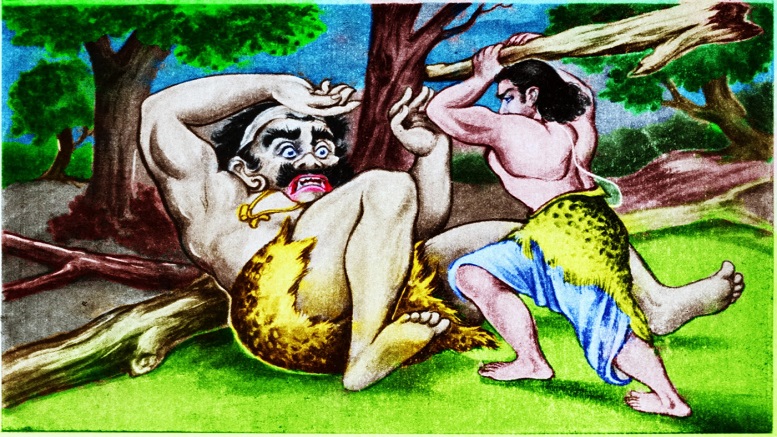 Sri Madhwacharya has explained, in his Mahabharata Tatparya Nirnaya (MBTN), how each of the pandavas were the personification of many auspicious ‘guNas’. Such an understanding is helpful in interpreting the Mahabharata as a ‘manvAdi’ grantha.

Amongst the pandavas, Bhimasena is the personification of 10 main guNas. Sri Madhwa explains this through one shloka in his MBTN

There are numerous incidents in the Mahabharata which stand as clear testimony to the display of such qualities by Bhimasena. In this post, let us look at one such incident — that of the killing of Bakasura — where Bhimasena displayed his immense dhruti — courage!

Sri Vedavyasa gives a few details about the much feared Bakasura in his moola grantha. However Sri Madhwa provides much more detail in his MBTN. Bakasura was the maternal uncle of the ten-headed Ravana. During Ramayana, he feared the arrow of prabhu Sriramachandra and ran away from Lanka. He took refuge in a cave in Ekachakranagara.

Soon thereafter, Bakasura started troubling the citizens of Ekachakranagara. Since he was a man-eater, many residents of the city became his victims. The brahmanas of the city then got-together and worked out a deal with him. Once every 13 years, they would voluntarily send a cart-load of eatables along with 2 bullocks and a driver to Bakasura. All of the sent items, including the bullocks and the person driving, would be for Bakasura’s consumption. In turn, Bakasura would spare the rest of the citizens from his attack.

Bakasura accepted the deal and in turn would protect the city from any external attack. He was an extremely powerful rakshasa and even the mighty Jarasandha had been unable to defeat him.

Since the frequency of offering to Bakasura was only once every 13 years, a sort of neglect set in amongst the residents due to which none of them moved out. Tragedy would only strike one family every 13 years and they became negligent of the impending disaster.

Wailing of the Brahmana Family

After escaping from the wax palace at Varanavrata, and the incident of Hidimba’s killing by Bhima and his marriage to Hidimbaa, Kunti and the 5 pandavas made their way into Ekachakranagara. One brahmin family, consisting of a pious couple, their elder daughter and a young son, gave them shelter at their home.

The pandavas used to go around the town for bhiksha and bring back the gathering at the end of the day. Kunti would then decide the share amongst them. Bhimasena would get half of the bhiksha while the other 4 pandavas and Kunti would take the other half.

One day, four of the pandavas had gone out for bhiksha while Bhimasena and Kunti had stayed back at the house. Suddenly they heard the loud wailing of the brahmana family next door. Kunti discussed the issue with Bhima and decided that the family must be in some serious trouble and they, as recipients of the family’s shelter, must intervene and help them out. Bhima requested his mother to go to them and identify the root of the problem. He promised to relieve the family of their trouble at any cost.

Kunti quietly came and stood near the door of the brahmana’s house and overheard their conversation. The brahmana, his wife and daughter were having a sorrowful exchange — each of them was offering to be the ‘victim’ at the hands of a powerful rakshasa. Listening to his parents and elder sister continuously argue with each other, the young boy finally intervened and, in his playful style, picked up a blade of grass and vowed to kill the rakshasa with the same.

Even in the midst of the great tragedy, the young boy’s comment brought smiles on all their faces. Sensing an opportunity, Kunti opened the door and started a conversation with them.

The brahmana then narrated the entire story of Bakasura and his victims. Thirteen years had passed since the city had sent him his customary ‘meal’. And this time it was the turn of his family! His wife had no one to take care of her, and his children would become orphans. Hence they were in a dilemma.

Listening patiently to the story, Kunti realised that the time to repay the family had indeed come. She told the brahmana that she was the mother of 5 sons and would therefore like to volunteer one of them instead of the brahmana or his wife. She assured the brahmana that her middle son was very powerful and she was confident that the rakshasa would be killed by him.

A long argument ensued between the brahmana and Kunti. Both were well learned and made many valid points related to dharma. The brahmana was not keen on saving his own life by sacrificing another brahmana (pandavas were in disguise as brahmanas) especially someone whom he had sheltered. Kunti explained how sacrificing one of her 5 sons was better than rendering the family headless. Finally, the brahmana relented and agreed.

The Dhruti of Bhimasena

It was at this moment that the amazing courage of Bhimasena came to the fore. Kunti returned from the brahmana’s house and informed bhima of the circumstances, and how she had volunteered to send him as a prey to the mighty and cruel Bakasura. Were it any other person to receive such a news from one’s own mother, he would have surely collapsed in fear and disgust. But Bhima was, after all, Bhima! His reaction was one of instant joy!!

In fact, the joy on Bhima’s face was so evident that Yudhisthira, who then returned from bhiksha, noticed the same on his face and became curious to know the reason behind Bhima’s ‘harsha’.

There was not even an iota of doubt in Bhima’s mind about killing Bakasura.

Kunti then explained to Yudhisthira and the other pandavas about the day’s incidents and convinced them that it was a very sane, and safe, decision to send Bhima. She told them how Bhima was endowed with the strength of ten thousand elephants and how the mountain ‘shringa’ had broken into pieces when an infant Bhima, then barely few days old, had slipped and fallen from her hands. Yudhisthira too became convinced and agreed to the plan.

Bhima Has a Meal

The residents of the city then gathered at the place of the pandavas. All of them had collected the various items to be offered to Bakasura. This included various meats, delicious sweets, huge mounds of rice and numerous other dishes. The lot also included several drinks, many jars of milk and curds. All of this was placed on a cart with two black bullocks.

The residents accompanied Bhimasena as he made his way towards Bakasura’s cave. As the destination approached, the residents stayed back at a distance keen on observing what was about to happen. Bhima finally reached the entrance of the cave. He then decided that it was better to finish the meal at the entrance before the rakshasa came out. “Once I kill Bakasura, the meal will become ashuddha. Also I would have to take bath due to the killing. Therefore it is better I finish eating now” — thinking so, he started gulping the items one by one.

The citizens who were watching all of this could not believe that a brahmana could actually eat so much. Some of them started telling themselves that it must be Bakasura himself who was in this guise and eating the food while fooling the citizens.

As Bhima came close to finishing the meal, he let out a loud shout daring Bakasura to come out. Hearing the thunder-like roar of Bhima, Bakasura rushed out of his cave. The sight of Bhima finishing his meal, which he in fact was eagerly awaiting, infuriated him no end.

He became extremely agitated. His eyes turned red, and his eyebrows stood up in anger. He rushed towards Bhima asking him how he dared touch the food. Bhima did not flinch one bit and focused on enjoying the dishes. Bakasura joined both his hands and landed a mighty blow at Bhima’s back. But that blow had absolutely no effect on Bhima! It was as if a tiny mosquito bit his back. He did not even turn around to look at Bakasura.

Baka’s anger knew no bounds. He plucked a huge tree nearby and tried to smash Bhima’s head with it. Displaying his amazing strength, Bhima stopped that massive tree with just his left hand and continued eating with this right hand!!

Finally he finished his dinner, washed his hands and stood up in front of Bakasura. That was when Baka realized his opponent was like a massive mountain!

A great duel ensued between the two mighty warriors. Bakasura repeatedly plucked huge trees and threw them at Bhima. It had no effect on the madhyama pandava. He stopped each of them with just his left hand. After exhausting all the trees, Bakasura launched himself on Bhima. The two wrestled each other like elephants in mast. Bakasura kept landing blows on Bhima, but they failed to cause him any harm.

Bhima engaged Bakasura for a while. Slowly, it became apparent that Bakasura was tiring. He blows became weaker and he started struggling to move. Even the citizens who had gathered at the nearby mountain noticed that Bhima had started to gain the upper hand.

Finally, Bhima decided to end Baka’s misery. He landed a couple of mighty blows on Baka which floored him. He pressed Baka’s left foot with his knee and held his other leg with both his hands. With one pull, Bhima ripped apart Bakasura into two parts.

Bakasura let out a painful roar. His prana left the body. There was blood splattered all over. Bakasura was dead.

Bhima dragged the corpse of Bakasura and left it at the city’s gates. Meanwhile Bakasura’s family members and his numerous servants got to know the terrible fate of their leader and surrendered to Bhima. “You shall never trouble any human being from now on. Else your fate will be the same as your leader” — saying so Bhima excused all of them.

Bhima reached the house of the brahmana and returned his cart and the two black bullocks to him. He narrated the entire incident once again. The entire city erupted in joy. There were massive celebrations all over. “These brahmanas are very pious. No wonder they were able to kill even such a mighty rakshasa” — the citizens spoke thus about the pandavas who were still in disguise.

Special poojas were held in all the temples of the city.

The news of Baka’s death spread rapidly and nearby villagers started pouring in to the city, to see his dead body and to join the celebrations. The citizens of Ekachakranagara decided to honour Bhima by bringing him food every day to his house itself so he doesn’t have to go out for bhiksha.

Thereafter the pandavas and Kunti, along with the citizens of Ekachakranagara, lived there happily for a long time.

(This article was published on medium.com and has been reproduced here in full.)