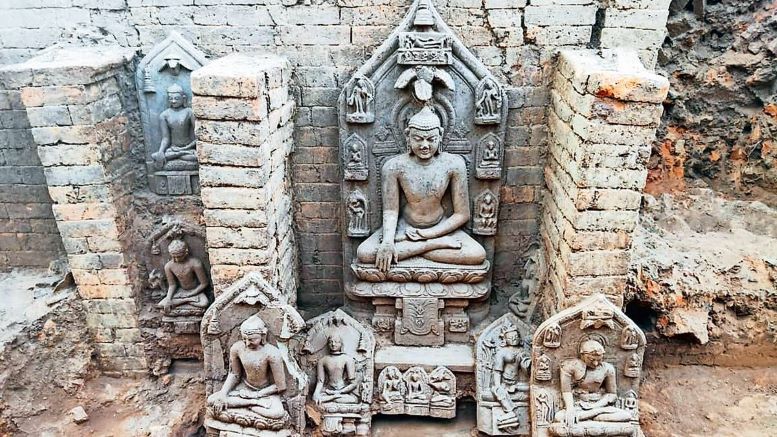 As per a Hindustan Times report, a 10th-century structure resembling a small ‘Buddha Vihar’ (Buddhist Shrine-cum-Monastery) has been discovered during an excavation being carried out by the Archeological Survey of India (ASI), in the foothills of Juljul hill at Sadar block of Hazaribagh district, around 110 km from the Capital Ranchi. The Buddhist monastery is believed to be at least 900 years old.

The ASI had first started excavating the site in November 2019 but due to Covid 19 and lockdown, the excavation work was put on hold. Interestingly, only two months ago, an ancient Buddhist Shrine was discovered, buried under a similar mound, hardly 100 metres away. Last year the ASI identified three mounds connected with Buddhism in the foothills.

Niraj Kumar Mishra, Assistant Archeologist of Excavator Branch III, Patna, ASI confirmed that in December they found a Buddhist Shrine with three rooms near an agricultural land on the Eastern side of Juljul Pahar. The Central Shrine had Tara’s statue and two subsidiary Shrines had Buddha’s.

The subsequent round of excavation started in the last week of January. The second mound was excavated and a small Buddha Vihar like structure was discovered. On Thursday, they found a sculpture which appears to be that of Shaivite deity Maheswari– with a coiled crown and chakra– indicating cultural assimilation in the area, said ASI officials.

“We found four statues of deity Tara in Varad Mudra that is a gesture of hand showing dispensing of boons and six statues of the Buddha in Bhumisparsa Mudra, a gesture of hand showing five fingers of right hand towards the earth symbolising Buddha’s Enlightenment. So it is a significant finding as deity Tara’s statues mean this was an important centre of Vajrayana Sect of Buddhism, Dr Mishra added. Vajrayana is a form of Tantric Buddhism, which flourished in Bharat from the 6th to the 11th century.

Mishra said, “The ASI has not yet done scientific dating of the structures, but it represents Pala period based on earlier findings. Last year, during excavations we found a script of four-five words and sent it to ASI Mysore for Paleographic dating for Historical Manuscripts. They said it was a Nagri script and they dated it between the 10th century AD to 12th century AD. Nagri is a previous version of the Devnagri script and the words indicate Buddhist religious affiliation. This time also we have got Nagri script on a Tara statue.”

It might have been a big religious centre then, as it is located on the side of the old Grand Trunk Road, connecting Sarnath in Uttar Pradesh to Bihar, Home to the historic Bodh Gaya where Buddha attained salvation, Mishra added.

ASI Patna Superintending Archeologist Rajendra Dehuri said: “This is a significant finding in terms of the spread of Buddhism in Jharkhand. However, it is also a matter of research and further findings.”

The discovery of the 10th century Buddha Vihar in the Hazaribagh district will help the Archeologists and Historians to acknowledge the history and influence of the dynasty in Jharkhand.