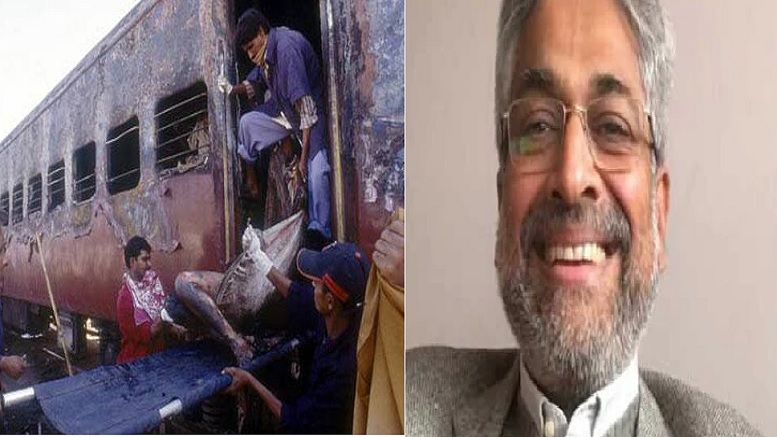 February 27, 2002 was a dark day in the history of our nation. What occurred that day sent a shockwave down our collective spine and invoked a feeling of horror and disgust in the most stoic of hearts. 59 innocent devotees, including 10 children and 27 women, were burnt alive in coach S-6 of Sabarmati Express just a little distance away from Godhra station in Gujarat, as part of a planned conspiracy.

But such is the hate for Hindus coursing through the veins of our elites, that to this day many of them maintain that what happened that day is ‘not clear’. Some claim it was an ‘accident’, others hint it could have been an ‘inside job’ (to vilify Muslims). In an article by Prem Shankar Jha (archive link) that was published in The Wire yesterday, the same claims were regurgitated.

Sharing that article, this is what Siddharth Varadarajan, editor of The Wire, tweeted:

The long and short of Jha’s article:

For good measure, Jha – a Doon School, St. Stephen’s and Oxford University product who has edited leading newspapers like Hindustan Times, Times of India and is currently associated with Harvard University – also speculates that not more than a dozen kar sewaks died in that ‘accident’, most who perished were passengers who boarded at other stations than Ayodhya. The implication being: Sangh parivar ‘exploited’ deaths of non-kar sewak Hindus to target Muslims.

In 2011, a trial court found 31 Muslim men guilty of a planned conspiracy to attack the train returning with kar sewaks from Ayodhya, and sentenced 11 to death and 20 to life terms. The main conspirators were found to be Haji Bilal, Faruk Bhana, Abdul Rajak and Salim Panwala. Bhana was secretary of the district Congress committee and an elected member of Godhra municipality, and Bilal was a known Congress worker in Godhra. The man who allegedly inspired this gruesome carnage, Tablighi Jamaat preacher Maulana Umarji was acquitted due to lack of ‘concrete evidence’. Tablighi Jamaat had a network of seminaries in Godhra. In 2017, the Gujarat HC upheld the convictions but commuted death penalty to life imprisonment.

This is what the prosecution lawyer proved in court, based on which the accused were convicted –

“The petrol Cans which were stored at Aman Guest House were taken in a loading rickshaw, near the “A” Cabin and the bogey was set on fire by putting burning rags inside the compartment and through broken windows by the miscreants. Few culprits had forcibly entered into the compartment by cutting open the vestibule and petrol was emptied in that compartment. The passengers were terrorized by beating them and pelting of stones and were prevented from coming out from the burning compartment, provocative slogans were shouted from the loudspeaker from a nearby mosque (“Pakistan Zindabad”, “Hindustan Murdabad” and “Hindu Kafiro ko Jala dalo”, i.e. burn the Hindu unbelievers) to arouse passions in the violent mob. Fire tankers were prevented from going near the place of the incident.”

“[26] Conspiracy came to be hatched on the previous day i.e. 26-2-2002 during the meeting held in Aman Guest House between the conspirators Haji Bilal, Faruk Bhana, Abdul Rajak and Salim Panwala.

[27] As per the plan, Abdul Rajak Kurkur and Salim Panwala both had gone to Kalabhai Petrol Pump on moped scooty on 26-2-2002 at about 10.00 p.m. taking with them other conspirators Salim Jarda, Shaukat Ahmed Charkha @ Lalu, Imran Ahmed Bhatuk @ Sheru, Hasan Ahmed Charkha, Mehbub Khalid Chanda and Jabir Binyamin Behra in a Three Wheeler Tempo No. GJ-6 U- 8074, and purchased 140 litres loose petrol in 7 different Carboys and then, stored it behind Aman Guest House, in the house of Abdul Rajak Kurkur. Thereafter, a meeting of these conspirators was again held in the Room No. 8 of the said Aman Guest House.

[29] As per the said instruction the assailants by turning disk of ACP situated on the outside of the Coaches, stopped the train near ‘A‘ Cabin.

[30] Then immediately, Abdul Rajak Kurkur and absconding accused Salim Panwala taking with them a Carboy containing petrol proceeded towards ‘A‘ Cabin on a Red coloured M-80 Bajaj moped scooty.

[33] Abdul Rajak Kurkur and absconding accused Salim Panwala went near Coach S-6 and poured petrol from the broken window, just near the closed door (towards engine/front side) of the Coach S-6.

[34] Mehbub Ahmed Yusuf Hasan @ Latiko who had with him a big knife (Chharo for cutting meat) first made holes on the upper part of the Carboys and then, cut the canvas vestibule of Coach S-7, situated between the Coaches S-6 and S-7 (corridor).

[35] Mehbub Ahmed Hasan and Jabir Binyamin Behra climbed up the said corridor place and by use of force with kicks etc, opened the eastern side sliding door of Coach S-6.

[38] Ramjani Binyamin Behra and Hasan Lalu were throwing petrol from the outside of the Coach, towards windows.

[42] If there was no plan at all, it would have not been possible to gather muslim persons with deadly weapons within five to six minutes and to and to reach near ‘A‘Cabin on the railway tracks.

[47] Godhra is known for its past history of communal riots.

[48] For Godhra, this is not the first incident of burning alive innocent persons belonged to Hindu community.”

Gayatri Panchal, a teenage survivor, who saw two of her sisters and parents being burnt alive and somehow managed to jump out a broken window and crawled under the burning train to survive, recollected the horror –

“People were carrying weapons like Gupti, Spears, Swords and such other deadly weapons in their hands and were throwing stones at the train. We all got frightened and somehow closed the windows and the doors of the compartment. People outside were shouting loudly, saying ‘Maro, Kato’ and were attacking the train. A loudspeaker from the Masjid close by was also very loudly shouting ‘Maro, Kato, Laden na dushmano ne Maro.’ (“Cut, kill, kill the enemies of Laden”) These attackers were so fierce that they managed to break the windows and close the doors from outside before pouring petrol inside and setting the compartment on fire so that nobody could escape alive.”

Does this answer your questions after all these years, Prem Shankar Jha and Siddharth Varadarajan? The carboys (jerrycans) were cut from the top so that they became like buckets using which petrol could be easily poured. Rags soaked in petrol were also thrown. Weapon-carrying men whipped into a frenzy by sloganeering from a mosque loudspeaker, with a blood-thirsty mob to support them, could easily have overpowered anyone who tried to stop them at the vestibule/door connecting coach S-7 and S-6.

The court has named the exact people who entered S-6 with carboys and poured petrol. They did this based on witness testimony and confessions. Hypothetically, let’s for a moment accept your central argument that “not a single passenger saw the petrol being poured”. People were taking cover from the stones raining down on them, trying to protect their loved ones, fighting off smoke which had already started filling the coach from the burning rags and petrol thrown from outside – can they be blamed if none who survived was able to witness the actual act of petrol being poured inside the coach?

And if the fire indeed was accidental, how did it manage to engulf the entire coach so quickly and why couldn’t passengers save their lives by getting off the stationary train? You know why? Because there was a 1000-strong mob waiting to kill them if they got off the coach. The train driver, ticket examiner, several passengers have testified to the presence of this mob and to the blood-curdling slogans they were shouting. If these were ‘innocent bystanders’ why didn’t they help people escape the fire? How come petrol residue was found on burnt clothes, and not kerosene, which is cooking stove fuel?

But you know what, Messrs. Jha and Varadarajan? It’s futile arguing facts with you lot. You are so consumed by hatred for everything Hindu, and so convinced about the infallibility of your ideological dogma, that nothing will convince you. There is no dialogue possible between people like you and us Hindus. And we know you are not alone.

Every English-language media outlet, every HINO (Hindu In Name Only) elite has at some point or the other, to some degree or the other, cast doubt on what happened in Godhra that day. Sample this Quint article, or this article in an American liberal portal, or this one by Mohan Guruswamy in Hindustan Times where the writer believes the person who poured petrol in the coach must have been ‘someone well-known to the karsevaks’. Guruswamy, a Harvard and Stanford product, was financial adviser to the NDA-1 govt for a brief period and is now associated with a Chennai-based defence think tank.

Those who cannot understand the pain of what the entire Hindu community suffered at Godhra on February 27, 2002 are beyond redemption. There is no difference between people like Jha, Varadarajan, Guruswamy et al and Hafeez Saeed. In fact, Saeed is at least more ‘honorable’ in the sense that he is open about his hate and actions.

Hindus now understand the strategy adopted by HINO elites: never accept anything that Hindus say, ignore Hindu lived experience with contempt; cast aspersions on govt, law enforcement and courts the moment they step even a fraction away from the script Hinduphobes want them to follow; advocate and celebrate every thing that divides Hindus; promote the most extremist elements among minorities; occupy the high moral ground as protectors of the Republic and join hands with your foreign friends to berate and shame Hindus at every turn.

And you know what? Even right-thinking non-Hindu citizens of Bharat are catching on to this ongoing fraud. This is what Khalid Baig, a Kashmiri Muslim, had to say on Varadarajan’s tweet and Jha’s article.