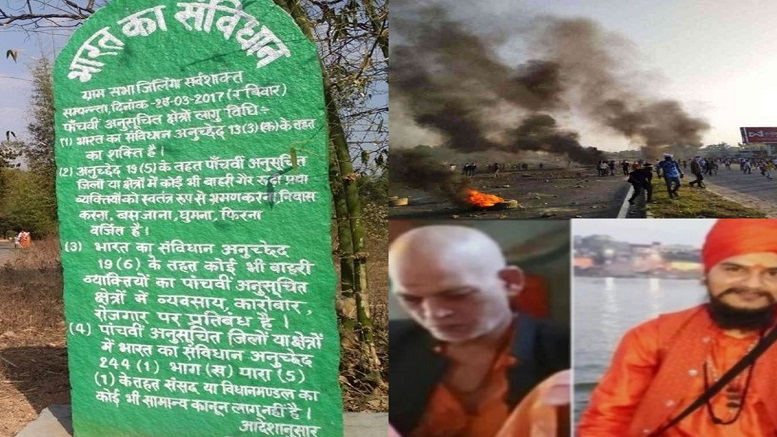 This is the taboo that nobody wants to talk about. This is the Rubicon that the media and the intellectuals do not dare cross. After remaining in shadows for long, the tribal extremism in Bharat has started to surface. Another long term project of breaking Bharat forces is slowly gathering pace, the faultline this time being the tribes or vanvasis of Bharat.

Vanvasis have been living in forests and inaccessible places of Bharat since time immemorial. They have figured prominently in Hindu scriptures and history and most of them have historically been part of Hindu samaj. Given that Hindu sadhus preferred forests over villages and cities, they lived in close communion with them. Despite the claims of anti-Hindu forces to the contrary, tribals have always been Hindus.

However, tribals are in general, poor and marginalised. However, this was always not so. Tribals ruled kingdoms and conducted extensive trade even until Mughal rule in Delhi. The real reason for poverty among tribals were the policies of British.

The British rule brought with it many tragedies for the tribals. In fact, during the whole duration of British rule in Bharat, tribals in one area or other revolted almost every decade against them. Some big revolts like Santhal Hool of 1855 or Ul Gulan of Mundas in 1890s shook the British badly and they were forced to make some rules to accommodate them.

The reasons for these revolts were almost similar everywhere. The tribal way of life was impacted by British Forest Laws (which remained in existence until 2013!), torture and corruption. The Christian missionaries, who denigrated the religious practices of Hindus were also at considerable fault.

Unfortunately, today Brahmins are blamed for their condition because according to “Dalit intellectuals”, everything wrong with this country is due to Brahmins.

For the first eight years of his stay in Bharat, he wrote books from a Christian perspective. He emphasized that tribals were not Hindus. Following the footprints of Christian missionaries, he called them animists. Unfortunately, that view stuck and is quoted by Hinduphobics even today. From 1935 onwards, he corrected his views and emphatically said that tribals are indeed Hindus. But the damage had already been done.

His second blunder was his prescribed policy to approach tribals. He emphasized that they should be undisturbed as long as possible and should be made part of mainstream “at their own pace”. This led to marginalization of tribals as state conveniently forgot about them for a very long time.

Today, the naxals work as the armed soldiers of foreign funded Missionaries in many parts of Bharat. Both these groups have a declared agenda of breaking Bharat and thus their interests converge to a large degree. The front organisation of these powers, which operate as NGOs, keep bringing the false narratives about tribal marginalization and exploitation to the fore. In this they are supported by other breaking Bharat forces.

It suits missionaries to deflect the blame on Brahmins and Hindus. Then ironically, they also claim that tribals were never Hindus! Truth is, Hindu Dharma all over Bharat retains practice of worshiping gram devtas(village deities), kul devtas(ancestral deities) and pitri-devtas(ancestors). Reverence to nature is inbuilt in Hindu Dharma. How is it different from animism?

Unfortunately, the narrative building by Maoists, Ambedkarites and Christian evangelists has actually succeeded among certain tribal communities. Thus you commonly see tribals complaining against Brahmins, although Brahmins had nothing to do with their condition, even according to secular history!

However, “Brahmins are foreigners” and Tribals are “Mulnivasi”(and thus sole “owners” of Bharat) is the narrative today. Brahmins are said to be from either Thailand or Eurasia, depending on which crackpot you ask. This narrative against Brahmins is then extended to wider Hindu Samaj. The “dehumanisation” of Brahmins in this narrative has to be seen to be believed. This is much like the Nazi propaganda against Jews.

Thus, you see examples like lynching of Sadhus in Palghar, the persecution of Hindus in Meghalaya and the open hate, lies and slander against Hindu Dharma in social media by the likes of Hansraj Meena and his “Tribal Army”. The political fallout is the Bharatiya Tribal Party.

This is a small party yet, but has considerable influence in Gujarat and Rajasthan. It even has MLAs in Rajasthan from Dungarpur. This year in September, there was a movement in Dungarpur. You were never told about this. 2 people died, hundreds injured and property of more than rupees 100 crore was destroyed. However, unlike Bangalore riots, no one covered this.

It did not get into news as the riots were orchestrated by radicalised tribals. The reason was that the tribals wanted about 1200 posts of teachers, which were unreserved, to be filled only by ST candidates. This was without any rhyme or reason. However, such illogical demands are the staple in tribal activism. In their narrative, they are the sole “owners” of Bharat and all others have no rights at least in areas inhabited by them. Thus, the “pathalgadhi” movement led to massacres because the radicalised tribals do not want any “outsider” to even enter their villages!

The radicalisation of tribals has unfortunately been ignored for far too long. This radicalisation is not the same as Maoist insurgency. This is far more dangerous to the nation. The people who are responsible for this situation are still free to spread their hateful ideology and preach their nefarious views. It is not as if no body recognizes the danger. Al local level, police, political workers and even common people know of the danger. Yet, there is no concrete policy to deal with the same. One only hopes that one is wrong in the assessment of the danger and that the government is taking some steps in the background.