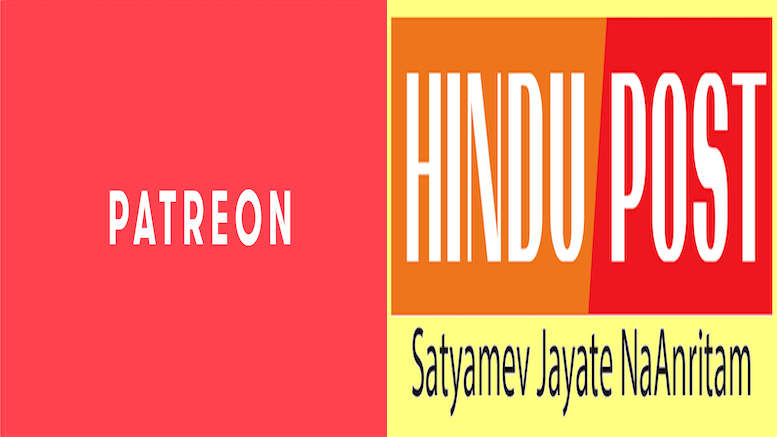 HinduPost was started in Jan 2016, and as we approach our 5th anniversary, we can look back with quiet satisfaction at having served the Hindu cause to the best of our abilities and with unswerving dedication. But then again, we are just getting started and there is a long way to go yet.

There were many doubters when we started, which is understandable because that is just how Hindus have been conditioned for so long – to melt into the background, to be ‘tolerant’, to not ruffle too many feathers. Why do you have the word ‘Hindu’ in your website’s name, why does your site carry so many ‘Hindu-Muslim reports’, can you be more positive? All genuine questions….and truth be told, there were times when we also questioned the purpose of it all.

But then the next lie, the next human rights violation, the next challenge to the very roots of Hindu Dharma would manifest itself, and the doubts would melt away. If we don’t report the truth today, if we don’t challenge those who wish to see us disappear, what kind of legacy are we leaving for future generations?

All the while, the words and wisdom of our mentor, Swami Vigyananand, who always reminded us “It is not easy to work for Hindu society, but getting disheartened is not an option” gave us the energy to keep going.

So we persevered and countered the lies all around – we reported on the cow smugglers who are terrorising villagers, the groomers who are targeting vulnerable girls, the temples that are vandalised and robbed, the festivals that are attacked, the laws that discriminate against a ‘majority’, the academia that passes judgement on us while refusing to hear us out, the politicians who take us for granted and play us off against each other,  the stifling bureaucracy that holds us back, the popular media which mocks us while pocketing our money, and the traitors within who whisper slyly while rotting the soul of this nation. We brought the stories of the  people who are undergoing genocide as we speak, while Bharat and the rest of the world watches mutely.

Have we made any difference? Is our voice being heard in the corridors of power? Honestly, we don’t know, and while we do care and strongly insist that it is the duty of every Hindu to hold those we elected accountable, maybe worrying too much about results is counter-productive. When a people have been suppressed and their collective consciousness systematically erased, the way it has been done with Hindus, every single act of defiance matters.

Do your Dharma with full awareness and focus, and the results will take care of themselves – that timeless wisdom of the Bhagavad Gita always holds good.

So we will persevere, covering as many stories as we can. And we have seen a flowering of the Hindu spirit in the last few years – from individuals spending hours on social media unravelling vicious lies and twisted narratives, to self-organising groups coming together to crowdfund for a Hindu victim of yet another hate crime, to volunteers running book clubs, spreading Dharma online, feeding and assisting the poor, doing gau sewa, taking legal action against rampant Hinduphobia and other law breakers who got a free pass all these years….we wish to cover as many of these activities as we can.

We also want to congratulate the other digital outlets that are today part of the online Hindu ecosystem – a few of which have grown to towering heights and are doing an excellent job of questioning obsolete paradigms and ideologies that have dominated Hindu polity for too long. We might not agree on everything, but then again, top-down enforced uniformity was never the Hindu way! The important thing is that we support and challenge each other to reach greater heights, and to create the robust narrative which will empower Hindus to lead lives of prosperity and dignity.

So we request you dear readers, if you like what we have done so far and wish to see us grow, please support us generously as we look to expand our team in the coming year by adding more writers, editors, and regional language & video content creators.

You can become a patron for as little as $5 and as high as $100, and it shouldn’t take you more than 2 minutes to sign-up:

We are currently at $188 against our target of raising $2000 per month via Patreon.

Alternatively, if you would like to make recurring or one-time donations from a Bharatiya account/card, please visit:

For any questions, please write to [email protected]