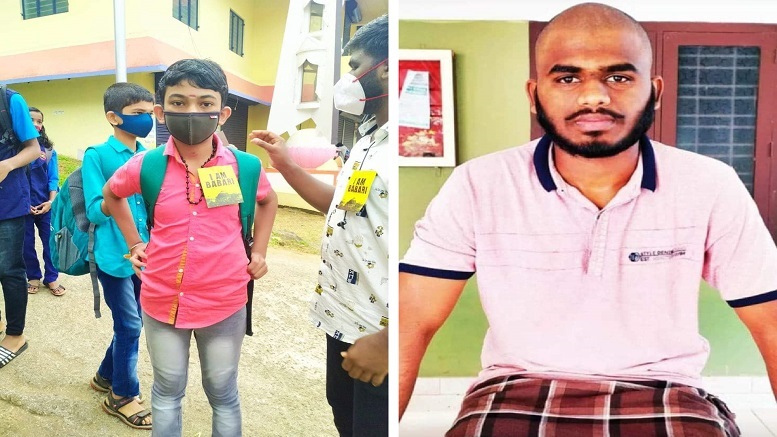 Kerala police has issued notices announcing that they are on the lookout for the Popular Front of India (PFI) activists who had pinned ‘I am Babari’ stickers on young school-going children last year. Local BJP leaders claimed that these accused are very much in touch with their PFI party leaders and alleged that local police in connivance with their communist political masters are not ready to check the call records and are thus delaying the arrest.

PFI activists forced school-going children, mostly Hindus, to wear badges that said ‘I am Babari’ on Dec 6, the day that the disputed structure built over a pre-existing temple at Ram Janmabhoomi, Ayodhya was brought down by kar sevaks. Though the children protested, the sticker was affixed on a group of students inside the St. George’s School in Kottangal, Pathanamthitta.

Kottangal panchayat is ruled jointly by the Communist Party of India (Marxist) (CPM) and the Social Democratic Party of India (SDPI), the political wing of the PFI. The lookout notice says that police are ‘looking’ for Mohammad Muneer Naseer S/o Naseer OA from Olikkapalakkal House and Salahudeen S/o Shahul living at Thadathel House for offense no 982/2021 committed at Perumpetty police station limits in Pathanamthitta district.

The crime had shocked Hindus all over the world. Teachers who noticed the badges asked the children to remove them and informed school authorities. Panic spread and the police registered a case for trying to create communal disharmony and riots in the area.

Parents said that their children who were on their way to school were forcibly inducted into the campaign. The parent-teacher association of the St. George’s School lodged a police complaint alleging that unidentified persons stopped students in front of the school and made them wear badges. The incident led to widespread fear in the area and children refused to go to school. BJP state president K Surendran alleged that Kerala is close to becoming another Syria where the government itself is aiding terrorism.

Even though Campus Front of India (CFI), the youth wing of the PFI had owned up the responsibility of distributing these yellow badges, police failed to act. Police inaction caused BJP National Executive Committee member PK Krishnadas to approach the  National Commission for Protection of Child Rights (NCPCR). Krishnadas alleged that workers of an Islamic organization had harassed students studying at the St. George’s School.

NCPCR Chairperson Priyank Kanoongo then asked the Pathanamthitta SP for a report on the incident. Based on media reports, Kerala NCPCR Commission chairman K V Manoj Kumar registered a case and asked the police for an action-taken report within three days but it has been almost three months and nothing has happened other than a lookout notice.

PFI’s Mandal President Taufeeq claimed that ‘every child born in Bharat’ should know the history of the Babri dispute and stated that everyone had a right to ‘propagate their ideas’ in Bharat. He added that it was an official campaign of the CFI and claimed that the children themselves asked for help to pin the badges!

Since we now know that an ancient temple did exist there and if we are to go by the PFI’s logic, what would have happened if Hindus made Muslim boys wear ‘I’m Ayodhya’ or ‘Jai Sri Ram’ stickers? Republic TV reported that Taufeeq said, “We feel the Supreme Court verdict is not justice.” No arrests happened.

Police registered cases under sections 153(A), 341 and 34 of the Indian Penal Code (IPC) against just 2 activists. Any acts that damage the maintenance of harmony between different communities, or ones that cause fear or alarm or a feeling of insecurity among members of any religious, racial, language or regional group or caste or community by use of criminal force or violence against them, come under Section 153A of IPC. Any person, who wrongfully restrains the way of another person shall be liable to punishment under IPC 341, and IPC 34 is related to criminal conspiracy to commit an offense.

Section 153A is non-bailable, cognizable and non-compoundable and convicts are liable for imprisonment for up to three years, or fine, or both. Non-compoundable offenses are the most serious offenses in which the involved parties cannot compromise out of court.

Interestingly, the child rights panel had written to the district police chief demanding an FIR to be registered under relevant sections of the Juvenile Justice Act, 2015 against those responsible for harassing students. Police have failed to include any such sections in their FIR as is evident from their own lookout notice. The delay in issuing the lookout notice and other actions give credence to BJP’s allegations.