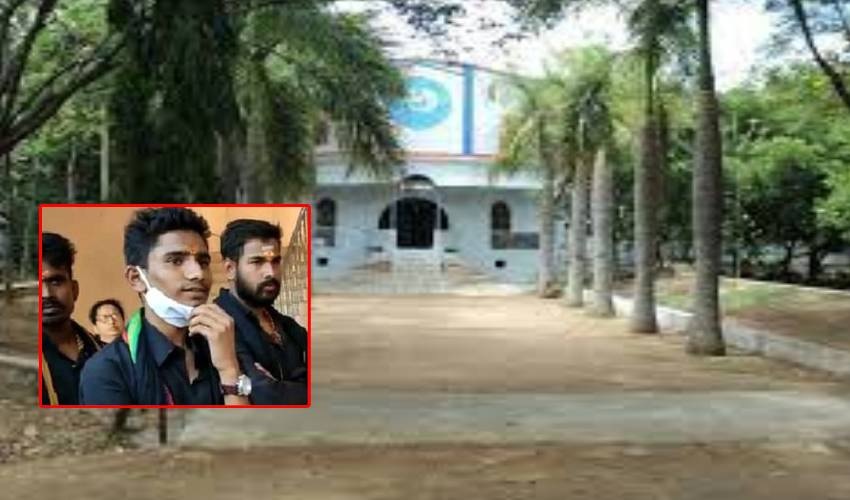 A complaint has been lodged by legal rights organization LRPF against St. Mary’s School, Sadasivpet, Sangareddy district, Telangana for punishing a Hindu student who observe Ayyappa Deeksha, the religious observance for 41 days by the devotees of Swamy Ayyappa before visiting the Sabarimala temple in Kerala.

As per the complaint lodged with NCPCR (National Commission for Protection of Child Rights), the school has violated various provisions of Right to Education Act, 2009, Juvenile Justice Act, 2000 and Article 28(3) of the Constitution of India.

The incident took place on November 22 when the school management denied entry to the student of class 10 named Kishore for wearing traditional Black Shirt & Dhoti as he is observing 41 days Ayyappa Deeksha. The school principal made Kishore stand in the hot sun for nearly an hour citing the above reason, and did not allow him into the classroom even after several requests.

This action by St. Mary’s School management has inflicted severe mental and physical harassment on the minor student.

The complaint states that school management is in violation of section 17(1) of the Right of Children to Free and Compulsory Education Act, 2009 which expressly bans subjecting a child to mental harassment or physical punishment. Cruelty to children is also prohibited under Section 23 of the Juvenile Justice Act, 2000.

After learning about the incident through news sources, LRPF (Legal Rights Protection Forum) members approached the student and his parents to know the details. Upon further enquiry, Kishore revealed that the school is imposing Christian religious views on Hindu minor Children by making it mandatory for them to attend Christian religious prayer daily in the morning.

Article 28(3) of The Constitution of India clearly states that, “— No person attending any educational institution recognized by the State or receiving aid out of State funds shall be required to take part in any religious instruction that may be imparted in such institution or to attend any religious worship that may be conducted in such institution or in any premises attached thereto unless such person or, if such person is a minor, his guardian has given his consent thereto Cultural and Educational Rights“.

Hence St. Mary’s School is also violating article 28(3) of the Indian Constitution by suppressing the rights of students of other religions and propagating Christianity by targeting minor students, which is not only contrary to the actual purpose of obtaining permission to run an educational institute but also against children’s ‘Right of Opinion to think and believe what they want and to practice their religion’ as prescribed by United Nations Convention on Child Rights in its Article No. 14.

LRPF has requested NCPCR intervention at the earliest, and strict action against St. Mary’s School authorities so that justice is provided to Kishore and his parents.

In 2018, a student from St. Adams High School, Chikadpally, Hyderabad was reportedly not allowed to write an exam because he was wearing the ‘Ayyappa Mala’. The 10-11 year old boy was reduced to tears and made to stand outside the class, which led to locals demanding strict action against the school.

There are multiple incidents each year of missionary-run schools acting against Hindu students who observe their religious beliefs. It is high time that a central legislation was introduced to protect Hindu religious beliefs like keeping shikha, applying vibhuti/tilak/mehandi, wearing Ayyappa Mala etc, the same way that Sikh students are allowed to keep patka/turban and kada.