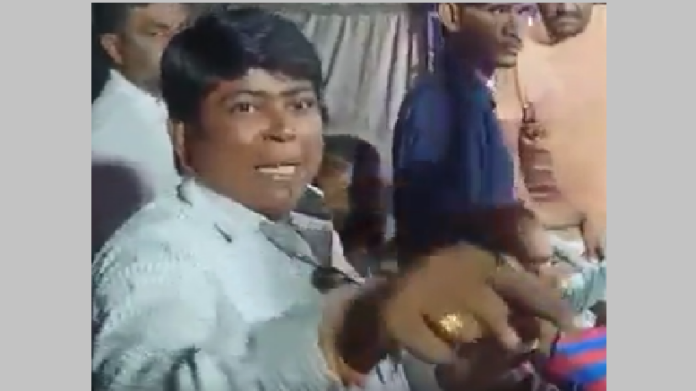 The denigration of Hindu Dharma in the secular Republic and the overt push to destroy traditional Dharmic institutions has had the intended effect of alienating a significant section of Hindu society from its roots and mainstreaming degeneracy. Previously, voices of reason and Dharma were shouted down with labels like ‘orthodox, regressive, rigid, prudish, patriarchal’ etc.

But Dharma is rising again in Bharat. The Dharmic voices that had been mocked and derided by mainstream media and secular HINO elites, are finding expression on the ground and through social media. And people are listening.

In an exemplary act which deserves to be replicated across the nation, a viral video shows a man stopping a vulgar dance being performed right in front of Maa Durga’s murti and her mandap. The video appears to be from Jirapur, a town in Rajgarh district of Madhya Pradesh.

The clip begins with two young girls dancing suggestively in front of Durga Puja pandal to what sounds like a lascivious Bhojpuri song. One of them collects money which men are handing out – so the scene is exactly like one would see in a dance bar.

A man, short in height but with clarity on Dharma, comes and up and says politely with folded hands, “Please stop this. Can the organizers talk to me for two minutes? Why are we making a mockery of our Dharma? (turning to face the crowd) And you all are throwing money at this? If someone were to ask you to donate for a Dharmic cause like cow fodder, then no notes will come out of your pocket.

“Has this puja been organized to show such dances? I tell you this with folded hands – if you organize any such program in guise of worshipping Mata ji, our nari-shakti (womens group) group will hold a protest dharna at this very spot”, he adds.

Turning to the girls he says, “I request you girls to not do such acts. This doesn’t honor you…..(turning to the crowd again) why are you all watching – what if they had been your sisters? Would you still watch like this? Why didn’t anyone protest? Don’t demean your Dharma like this. If you are Hindu, then demonstrate Hindutva.”

One of the organizers tries to argue, to which the man replies, “Please do aarti, puja, organize garba (traditional Navrati dance) – we will support you. But Mata Rani’s 9-day worship should be done with bhakti…stop such (vulgar) dances.”

It is not known what happened afterwards. Also, it has been found that many girls in such ‘dance orchestras‘ are victims of traffickers. The organizers of this ‘puja’ need to be held accountable and jailed – clearly, they were running a money-generation racket in the name of festival celebration. But such debauched ‘celebrations’ are not limited to the lowbrow masses – obscenity, playing of inappropriate filmy songs and recital of Adharmic literature in name of inclusiveness, happens during Dharmic celebrations even in high-society events.

However, what needs to be applauded is one man’s courage of conviction to speak up when he sees Adharma happening in front of him. Most of us lack this courage, either out of apathy or because we fear being labelled ‘dehati’ (rustic) or ‘moral police’. But when the degeneracy that is promoted by media, films and woke elites results in inappropriate behavior during Holi ‘celebrations’, it is the Hindu festival and our Dharma which is slandered! “Heads I win, tails you lose” is how HINO elites manipulate ordinary Hindus.

Degeneracy has sunk deep into our society, in both elite circles and among the masses. This is in no small measure due to blind aping of Western pop culture (for elites) and the glorification of stalking and ‘item song’ routines or other degenerate songs pictured on Hindu festival celebrations in Urduwood/regional films (for masses). It will not disappear overnight, but the fight against this filth is the fight that we must win at all costs.

Our enemies will try to gaslight us in myriad ways. So remember that this is not a call for imposing one standard across Bharat – Dharma is diverse and so are our traditions and celebrations. But there are basics on which every sampradaya/community will agree, and each Dharmic community has the right to decide what is acceptable and what is not. A Dharmic festival is a community celebration of bhakti and divinity – it should not be confused with entertainment or personal life events.

Things have become so bad that many people don’t even realize that it is wrong for kids to be shown as dancing to ‘item songs’ like Chikni Chameli in the movie Brahmastra. Here are some more examples of degeneracy – sexualization of children on Intragram reels; kissing scenes inside temples are being defended by secular HINOs; YouTube videos normalizing sexual harassment as ‘pranks’; glorification of woke ideas of ‘sexual liberation‘ and dubious social media ‘influencers’ as legitimate ‘alternative professions’.

Such degeneracy is promoted by our elites who are collaborators with BreakingIndia forces, as it destroys our youth, and the loss of Dharmic values in Hindu society creates a vacuum which can then be replaced by foreign religions which are ironically glorified for promoting iman i.e. ‘obedience to God’s will’.

Revival of Dharma is the single most important goal that all Hindus should have. धर्मो रक्षति रक्षितः (Dharma protects those who protect it). This anonymous Hindu from Jirapur has shown the way. We have to reclaim words like sanskar that have been mercilessly derided – good values lead to good behavior. Dharmic education from an early age is a must.