TN: 9 year old says missionaries compel to visit church and teach that Jesus is the only true god 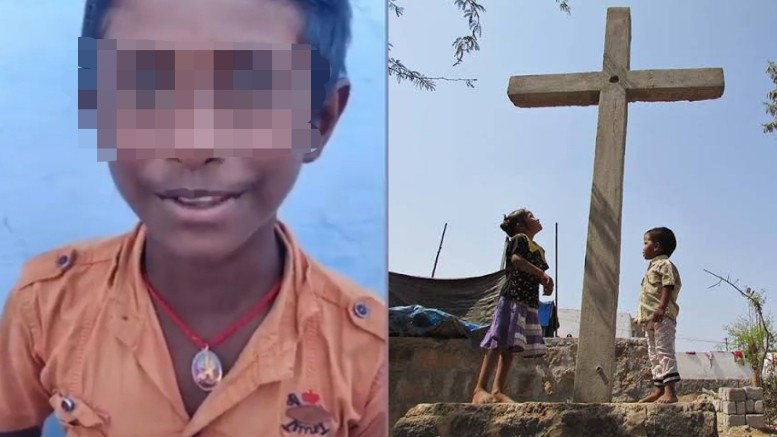 In a video going viral on social media a 9 year old boy has alleged that evangelists are targeting small children for conversion in his village. He says that missionaries come to his house when his dad is not around and compel him to visit the church.

The boy says, “They say that I shouldn’t listen to my parents’ words and that I should follow Jesus’s words. They don’t come when my dad is home. They come when he isn’t around and compel us to go with them. When we refuse they put some kind of powder on us and take us to the church”.

The kids are asked their names and told that only Jesus is the true god and only he is important. They are fed biryani and some liquid mixed in a green bottle which gave him heartburn, the boy says. They make them sing Christian songs, tell the kids that only Jesus is the good god and that other gods are bad. The kids are told to pray only to Jesus.

When the person who is interviewing the boy asks which gods do you worship, he says “I worship Paruthi Amman, Sudalai Samy and Mayana Sami. The interviewer asks which god they(missionaries) ask you to pray to, pat comes the reply “Jesus”. Sudalai and Mayana Samy are variations of Shiva as the deity of the cremation ground. Many down the South of TN have these deities as their Kula Deva. The boy says that kids are given some drink in which they put some tablet-like thing claiming that it will boost their energy.

As per the boy’s account even though he stopped going there after the first time, his sister wanted to go to the church and threw tantrums when their dad forbade it. His younger cousin who is usually happy to attend Hindu functions, didn’t want to attend one such event and told her mom, “Neither you nor that function is more important for me than the church”.

The boy says more than 50 kids are taken to the church by the missionaries and brainwashed in this manner. The boy is from Melakaranthai, a village in Thoothukudi district. Being an arid region where neither agriculture nor industry is prosperous, the district has been facing the onslaught of missionaries for a longtime. It is no wonder that kids as small as 9 year olds are brainwashed into embracing Christianity as the evangelists have a policy of “catching them young”.

Catching them young, or preaching to the 4/14 window i.e. to children in the developmental window between the ages of 4 and 14, is a well known missionary tactic. Children of vanvasis in Chattisgarh were brainwashed to convert to Christianity using similar tactics and were turned against their parents and relatives. When the elders asked the converts to leave the village as the latter started disrespecting their traditions and culture, the children lodged a complaint against their families and villagers alleging robbery and assault. It has been a time tested trick of the missionaries to evangelise kids first to bring in their families gradually through coercion, blackmail and turning them against each other.