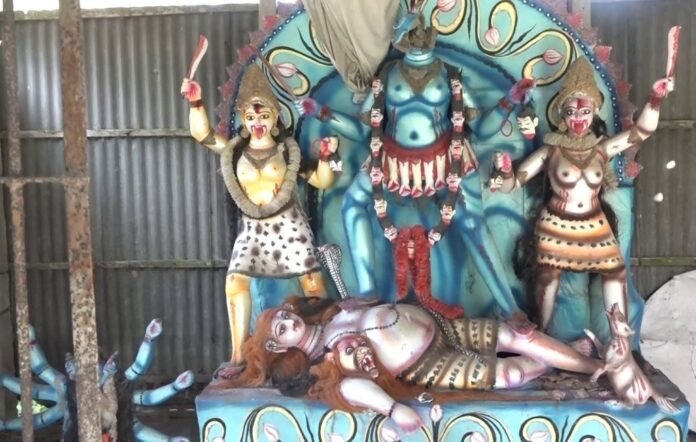 Sharbajanin Kali Mandir at Pirojpur, Shitola Mandir at Binnayuri and another temple at the residence of one Ajit Das were vandalized during the attacks, confirmed Delduar police Officer-in-Charge Sajjad Hossain.

The attackers beheaded the murtis at the temples and dumped the head of the Goddess Shitola murti in a nearby paddy field. Locals learnt about the incident in the morning and called the police.

A case would be filed over the matter, the OC added. Hindu Buddhist Christian Unity Council Delduar unit General Secretary Krishna Kanto demanded the arrest and exemplary punishment of the perpetrators.

In October, during Durga Puja, at least 10 Hindus were murdered, around 2 dozen women and girls raped, and hundreds of Hindu houses, temples, shops and Durga Puja pandals (pavilions) were vandalized, looted and/or burnt in nearly three dozen districts in ‘protest’ against the alleged defamation of the Quran at a puja venue in Comilla.

It was later found that the Quran had been placed in the Durga Puja pandal by a Muslim man, after meeting workers of a mosque earlier that night. Such manufactured incidents of ‘blasphemy’ are a common tactic used by Islamists to periodically target the country’s Hindu and other minorities.

The Bangladesh government blithely played down that anti-Hindu pogrom, which started on the eight day of Durga Puja and continued for a week, and even an Indian diplomat called it a ‘small incident’. But due to massive protests by Hindus and organizations like ISKCON in Bangladesh, Bharat and the rest of the world, the violence received wide media coverage for a change and was even condemned by UN and some Western politicians.

However, violence against Bangladeshi Hindus has become so routine and commonplace that incidents like this one from Tangail hardly elicit any response from the global community.