This Bahubali Sevayat of Bhagwan Jagannath was Mr India 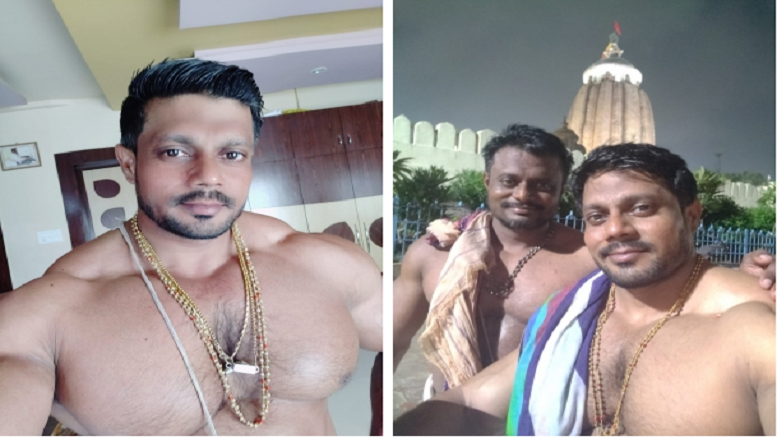 Thanks to the pandemic and social media many behind the scene faces have got their chance to bask in the limelight, similar is the case of Anil Gochikar, who has gained popularity as the Bahubali Sevayat or body guard of Bhagwan Jagannath.

On the auspicious occasion of Bahuda Yatra of Bhagwan Jagannath and his siblings in Puri, Gochikar, a ‘Pratihari’ servitor of the Puri Jagannath temple, has become famous for his well sculpted body and gentleman’s attitude. The 43-year-old became an instant Internet sensation after a few photos of him went viral during the Rath Yatra. In one photo he was standing on the chariot while in another, he was pulling the grand chariots. People soon started calling him Bodyguard and Baahubali Sevayat.

Gochikar’s family has been serving part of the personal security force of Bhagwan Jagannath over generations.

Since childhood, he has been attending ‘Akhada’ (a place of physical fitness practices). “In 2010, I joined the gym and started doing exercise after being inspired by my elder brother Sunil, who is also a bodybuilder. Since then, I have been continuously doing physical exercise everyday in the afternoon,” Anil told IANS.

He had already carved a niche for himself in the field of bodybuilding, the advent of social media made him even more popular. He won several awards and medals at state-, national- and international level.

Gochikar, who has the looks of an actor-model, has won the title of Mr Odisha seven times, Eastern India champion three times and Mr India four times. He also won gold at International Bodybuilders Championship in Dubai in 2016 and bronze at World Championship in 2014.

Gochikar is a pure vegetarian and stays away from alcohol, cigarettes or any tobacco product.

His diet includes dal, soybean, broccoli, etc for protein, desi ghee for fat. “However, if you are a vegetarian, you have to do more workouts compared to non-vegetarian,” he explains.

“Usually, we, ‘Pratihari’ servitors, were serving the Bhagwan inside the temple. However, due to Covid-19, I got this golden opportunity to serve the Bhagwan at Grand Road too. I will never forget this moment in my life,” he said.

Sharing his experience during last year’s Rath Yatra, he said, till the last moment, no one knew that the festival would be held. As a sudden announcement was made for the festival and there was a fear among the people about Covid-19, a limited number of servitors were there to pull the chariots.

“The chariots cannot move with only 300 odd persons. It was due to the divine power of Bhagwan Jagannath, the chariot moved,” he said.

“What is the use of the body if it is not used in the service of Bhagwan Jagannath. Earlier, there was no police force or administration, during that time, only the servitors had given protection to Jagannath,” the Bahubali sevayat said.

All three holy chariots of Bhagwan Jagannath, Bhagwan Balabhadra and Devi Subhadra have been parked near the Gundicha Temple to be rolled out on the Grand Road of Puri as the Bahuda Yatra rituals begin. Pahandi rituals of all three deities were underway.

Like last year, the festival is being held without devotees due to Covid-19 pandemic. Only servitors, police personnel and concerned officials have been allowed on the Grand Road during the festival.