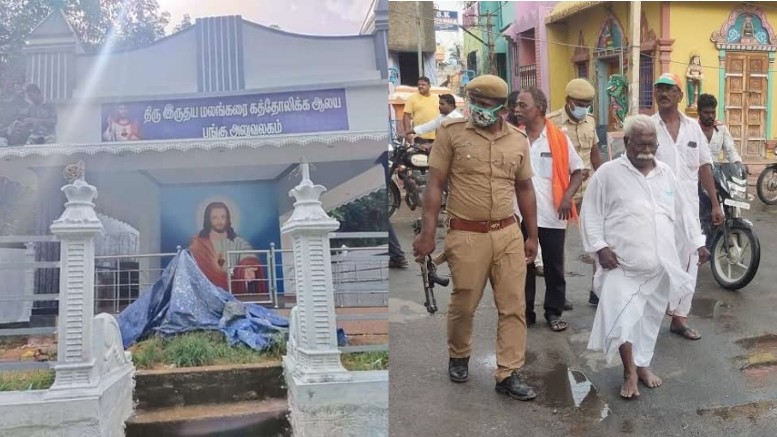 Kanyakumari MLA MR.Gandhi and BJP district president along with Hindu Munnani and VHP leaders were arrested and detained by the police yesterday. They were arrested for protesting against the illegal construction of a church.

As per local reports, BJP leaders including MLA MR.Gandhi went to inspect the site where a church was being constructed. The church is said to be built on land for which no permission has been given for construction work. Later they went to the Thiruvattar police station to file a complaint. But they were insulted and abused by the police officers and arrested on the spot. Following widespread protests in Kanyakumari they were released from detention.

Later when the matter was taken to the sub-collector, he confirmed that no permission was granted to build a church in the concerned land. The church is being built near an Ayyavazhi temple(a sect of Hindu Dharma, that follows Ayya Vaikunda Swami, prevalent in Kanyakumari and Thoothukudi districts).

Hindus of the locality have alleged that evangelists have been following this method of erecting a cross, constructing a temporary structure and later converting it into a proper church. Such structures mainly crop up near Hindu temples and mutts and harass Hindus into converting. An MLA himself protesting against such evangelist tactics is seen as a breath of fresh air in Tamil Nadu politics.