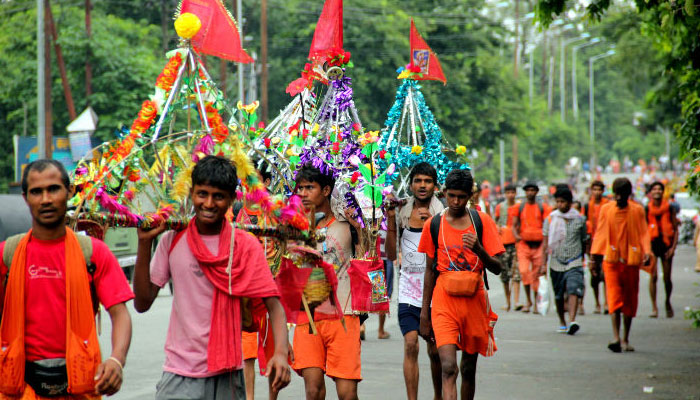 Yatras or pilgrimages have great significance in Hindu Dharma. Besides regular pilgrimages to Hindu holy shrines, Hindus undertake annual Yatras dedicated to a Bhagwan of their choice. According to the Hindu calendar, these pilgrimages are undertaken at a particular time every year.

The Kanwar Yatra is an annual pilgrimage held in the month of Shravan or Saavan, particularly in North Bharat. Devotees of Bhagwan Shiva, known as Kanwariya, fetch the holy Ganga water for Abhishek. The Gangajal is carried in pitchers to pilgrimage sites in Uttarakhand’s Haridwar, Gaumukh, and Gangotri and Bihar’s Sultanganj. The Kanwariyas walk barefoot, carrying the pitchers on their shoulders using a bamboo pole (Kanwar from which the devotees derive their name).

While the other Kanwar yatras are held only in Shravan, the Sultanganj to Devghar yatra in Bihar is undertaken throughout the year. This year the yatra will take place after two years, from 14 to 26 July. Neelkanth Mahadev temple in Rishikesh, Pura Mahadev and Augharnath temples in Meerut, Kashi Vishwanath, Baidyanath, and Deoghar are some of the pilgrimage centers visited by the Kanwariyas.

The largest and most significant gathering of Kanwariyas takes place in Haridwar, along the ghats of Maa Ganga. The Kanwar Mela was observed in Bhado (Bhadrapad). The Kanwar Yatra has been held in Shravan maas since 1960, and it travels to various places in Uttarakhand till the month of Dusshera. It is believed that the Devas performed Abhishek with Gangajal to minimize the effects of Halahala poison consumed by Bhagwan Shiva during Amrit Manthan. The annual pilgrimage commemorates this event.

“Some followers use different means of communication, like bicycles, scooters, motorcycles, jeeps, and mini-trucks to complete the journey. The devotees should be mindful that the pitchers should not touch the ground surface at any point during the journey. The saffron-colored dress is a custom for the Kanwar Yatris, which has a dress code of t-shirts and shorts. The Kanwariyas continue the divine blessings from Lord Shiva by chanting Shiva Mantra and bhajans throughout the journey”, says India Today.

The Wari in Maharashtra dates back 7-8 centuries. The temple towns of Dehu and Alandi are the starting points of the Wari. The Warkaris, devotees of Vitthal Bhagwan, accompany the padukas of Sant Tukaram and Sant Dnyaneshwar to Pandharpur. It is a 21-day annual yatra with pilgrims reaching Pandharpur on Ashadha Ekadashi.

The Kavadi tradition in Tamil Nadu is dedicated to Bhagwan Murugan (Kartikeya). Kavadi is a small wooden structure with an arch covered with a piece of cloth and peacock feathers on both ends. The devotee carries it on their shoulder along with bags of offerings. Kavadi bearers must observe austerities for 48 days, including not consuming liquor and non-vegetarian food. They usually wear yellow or saffron clothes. The annual pilgrimage is made during the two-day Thai Pusam festival.

Yatras, Kanwars, and Palkhis are integral to Hindu society, bringing people from different walks of life and various social strata on a single platform. Both men and women participate in it with equal enthusiasm. The yatras take different forms in different parts of the country, but the ultimate goal is to unite people on one platform. The devotees submit unconditionally to the deity and come together to celebrate their Bhakti.

We have merely cited a few of the numerous yatras aimed at not just spiritual enhancement but also community bonding. Such a display of unity doesn’t go down well with the Leftist-Abrahamic-HINO (Hindus In Name Only) cabal that keeps looking for ways to diss Hindu Dharma and society. The cabal repeatedly argues that these yatras cause ‘traffic snarls’. Admittedly some traffic issues might arise, but with better management, the authorities can easily overcome them.

Yesterday, police unearthed an Islamist plot to defame Kanwariyas and stoke riots in UP’s Bijnor. The Kanwar Yatra is on the hit list of Islamic radicals and Hinduphobic ‘liberal-secular’ elites every year. While Islamists resort to violent attacks on these pilgrims or throw meat on their route, India’s Anglophone media is full of reports slandering the Hindu pilgrims as ‘hooligans’, ‘menace’, and even accusing the yatra of ‘food fascism’.