Food fascism during Kanwar Yatra?!?! No. Prevention of riots by those determined to attack every Hindu pilgrimage Like every single Hindu festival or pilgrimage, the Kanwar Yatra too is not spared from attacks by the unholy nexus of Islamists, communists, and faux liberals. This annual pilgrimage of devotees of Bhagwan Siva, known as Kānwariyas, to fetch holy waters of Ganga from Haridwar, Gaumukh, Gangotri and Sultanganj, often becomes the target of ‘anti-social’ elements who strew meat, considered forbidden during the pilgrimage, in the Kanwariyas path to upset and provoke the pilgrims.

As per a report in Hindi daily Dainik Jagran, some ‘anti-social’ miscreants threw meat pieces all over the Ambala Road overbridge in Saharanpur, UP on Monday evening, just before Kanwariyas returning from Haridwar were due to pass from that route. When the pilgrims saw the meat, they started protesting. Police rushed to the spot to calm the situation and  got the road cleaned up.

This is not the first year that such a deliberate provocation has been observed. A similar incident was reported from Jaipur last year.

So it is no surprise that the Noida/Ghaziabad administration and police took the precautionary decision to close all meat shops along the route taken by Kanwariyas for the brief period the pilgrims will pass by. But the moment this news was picked up by English language MSM, cries of ‘FOOD FASCISM’ went up!

First off the blocks was a much-decorated writer/journalist based in US, who makes no bones of his contempt for what he calls the ‘Hindu Right troll army’ and is often seen exhorting Bharatiyas to be sensitive to criticism in ’eminent’ Western media outlets like The Economist (it of the ‘Rahul Gandhi is PM material’ fame), New York Times etc.

Could someone please explain this to me: Do yatris get to dictate dietary choices on their path every year or is this something new? Thanks. https://t.co/kEnMummYHy

It was left to another journalist, not as celebrated as him but with better understanding of the ground situation, to set the record straight – 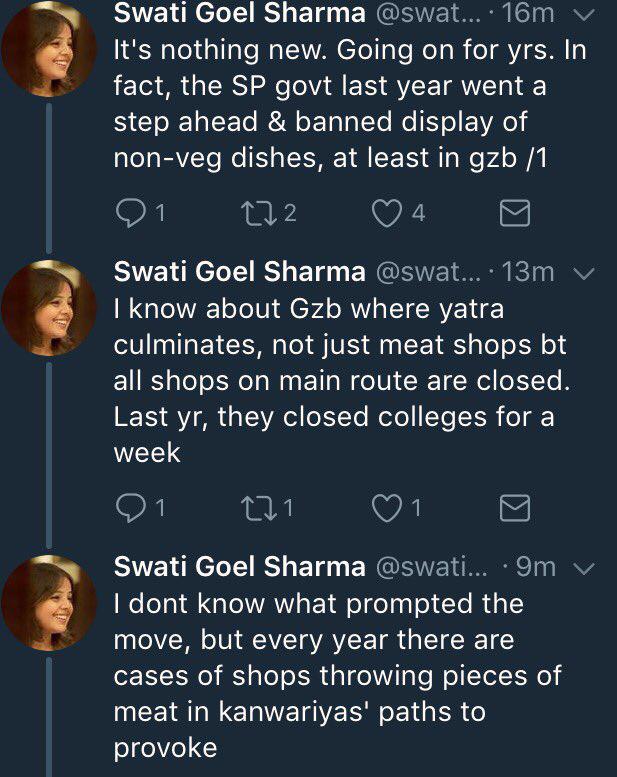 So it is not just the ‘hardline’ Yogi Adityanath led BJP Government that took the preventive step to avoid rioting, but even the previous secular-certified SP govt that was in power during last year’s Kanwar Yatra that took a similar step in Ghaziabad.

Another celebrated writer/journalist also fell for the ‘meat/eggs ban’ narrative and proclaimed it as the end of democracy, although he did have the grace to apologize for his mistake when it was pointed out to him –

This is TOTALLY unacceptable. The SHO, Ram Sen Singh should be suspended. If we still are in a democracy, that is. https://t.co/xpxQUlhVCT pic.twitter.com/A2GwbSNvPZ

Again, the person who bothered to personally verify the news story had to set the record straight –

I just checked with a few meat shops in Gr Noida, like Friends Meat Shop, & they denied there is a stop on sale of these items in next week

Unfortunately they don’t acknowledge what residents like me tell them. It has to b outraged coz some rag reported it https://t.co/WuAF77loQU

Its along the routes only. Other city shops still open. There shouldnt be any problem. The problem is People start asking for resignations.

I did one better. I checked what @noidapolice had to say. It’s in a native language called Hindi. It politely says NBT is bullshitting. Ciao pic.twitter.com/AiI082heVa