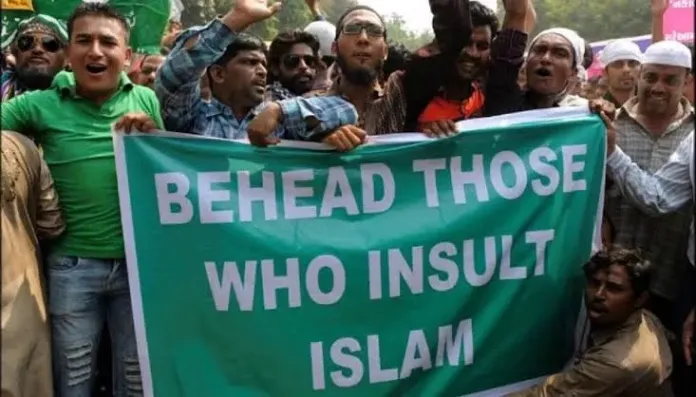 The Muslim habit of announcing bounties on the head of anyone deemed to have committed blasphemy against their prophet has reached epidemic proportions. The latest to be targeted is politician Nupur Sharma, who allegedly said something ‘offensive’ on a TV news debate aired on Times Now.

That the original Kashi Vishwanath mandir located in one of the holiest Hindu cities of Kashi (Varanasi/Benares) was demolished by Mughal tyrant Aurangzeb to build a mosque is known to every man, woman and child in this country. A casual visit inside the disputed structure will throw bare the facts. After all, what business does a mosque have in a location which is the equivalent of Vatican/Mecca for Hindus, except to demonstrate the ‘superiority’ of Islam over ‘pagan/idol-worshippers’?

The secular Indian state conducting a survey 75 years after ‘Independence’ to ascertain the truth of the Gyanvapi complex is another story. But the fact remains that the recent video survey found the ancient shivling installed in an area where Muslims now do wuzu (ritual cleaning of feet and hands before offering namaz). This is a well-established practice of Islamo-fascists to humiliate the non-Muslim, akin to burying desecrated and broken murtis at the entrance of mosques so that the ‘false Gods’ are trampled ever so often by the ‘true’ believers. By the way, enough evidence of a pre-existing Hindu temple has surfaced from this survey to make it an open and shut case.

We all know how the shivling, the sacred symbol of the elliptical cosmos, is mocked and denigrated by crass Hinduphobes, including deracinated HINOs (Hindu in Name Only). The discovery of the Shivling hidden inside the disputed structure was met with lame claims that it was a ‘fountain head’, and the usual mockery of the Shivling and Hindu Dharma which even ‘mainstream’ media like the Times Group indulged in.

It was in response to that tidal wave of hate that Nupur Sharma combatively suggested that if Hindus start mocking aspects of Islam that are recorded in its scriptures, things could get even uglier. And as is their wont, the Islamist gang cherry-picked her words to rev up the blasphemy engine. And Nupur’s name got added to the long list of ‘sar tan se juda’ (off with their head) targets with prize money on their head.

Here is a clip of what Nupur said, and here is what one of the most authentic hadith, Sahih al-Bukhari 5134 has to say on the issue at hand –

Narrated `Aisha: that the Prophet married her when she was six years old and he consummated his marriage when she was nine years old.

Sharia, which Indian courts have held as valid Muslim personal law, says a boy and girl can be married (and such marriage consummated) once they attain puberty. Medical science says girls usually begin puberty between the ages of 8 and 13 years old. So what is all the fuss about? Aren’t Muslim bodies like AIMPLB fighting against UCC exactly for this reason?

The double standard has existed for centuries now. Any open and frank discussion about Islam can and does trigger the ‘blasphemy’ charge, while even the worst sacrilege, abuses, denigration and mockery of Hindu Dharma is ignored or generates some outrage and legal action at most.

The last few decades have seen the weaponization of the blasphemy tool across the sub-continent by Muslim fanatics. Now, just the allegation of blasphemy is enough to justify instant lynching. Last year’s Durga Puja pogrom in Bangladesh is a classic case of how such allegations are manufactured and acted out. In Pakistan, this tool is commonly used to avenge business rivalries or personal disputes.

For the record, even saying something as innocuous as “Mohammed is not my Prophet” could be construed as blasphemy, no? Imagine, Hindus taking murderous offence for someone saying “Krishna is not God”. Of course, what is said about Sri Krishna is far-far worse, like the rogue Lutyens lawyer Prashant Bhushan calling him a ‘eve-teaser’. The venom that Asaduddin Owaisi spewed against Hindu deities in a public speech – the way he mocked the diversity of Hindu Dharma, the crass tone in which he questioned Sri Rama’s birthplace..it was the kind of revolting low-brow diatribe one would expect from a gully-level maulvi/bigot. But he and his elder brother are held up as educated representatives of India’s Muslims by the Lutyens’ elite! The secular state and its courts turned a blind eye to Owaisi’s unhinged rant.

How should Hindus react? We are branded ‘bigots’ and ‘communal’ irrespective of what we do. If we respond in a like fashion to Islamist provocation. Or if we take the legal route against Hindu-haters such as the stand-up ‘comic’ Munawar Faruqui – despite overwhelming prima-facie evidence as stated by the HC judge, and with videos of his past acts floating around, the SC still took up cudgels on Faruqui’s behalf and ensured he is roaming free on bail today.

For starters, we should treat whatever labels are hurled at us with the contempt they deserve. The HINO, left-liberal, secular gang is so thoroughly discredited and bankrupt that we need not waste even a single breath more than is absolutely necessary on them. The second step is to accept that this is not going away – the blasphemy tool will be used again and again to silence anyone considered a threat to Islamism. Hate for Hindus will only manifest more openly across the world as we resist and push back. This is a civilizational war, and it is not for the faint-hearted or those overly obsessed with image.

Organize and use every means at your disposal to safeguard yourself. Let no slight to Dharma go unpunished. File cases in bulk, hit the streets, announce bounties on those who spew hate against your sacred icons. Not bounties like the crass ‘bring me his/her head’ by garden-variety Islamists, but rewards for the activists/lawyers who ensure Hindu-haters are punished to the fullest extent of the law. Pledge allegiance to Dharma alone, to our deities and values, and not to any political party, organization or public figure. Your enemies have a long memory and long-term plans, so develop even longer ones.

There is no doubt that the secular state has failed Hindus. The kid gloves with which Kamlesh Tiwari’s murderers are being treated is evidence enough. This has given rise to a thought, not without justification, in some sections of Hindu society that we need to stop relying on the state and act against those who cross the line. But that would provide only short-term relief. The lasting solution is to change the nature of the Indian state, through Constitutional reform, to establish a Dharmic Rashtra, a nation where Hindus and other Dharmics are privileged and protected through law against expansionist, supremacist Abrahamic fundamentalists. A state similar to the 83 other nations that have an official/preferred state religion.

Only such a civilizational state is capable of permanently neutering the aggressive designs of monotheists, and of ensuring a harmonious Bharat where all citizens, including tolerant Muslims and Christians who too are threatened by these same fanatics, can live with freedom and dignity. The task of establishing such a state may seem improbable seeing the colonized, decrepit state of our institutions today, but I believe it is achievable within our lifetime if a critical mass can be awakened.