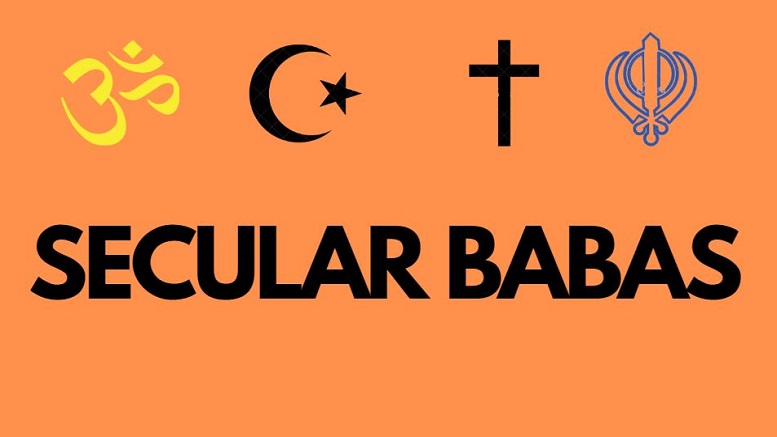 Secular Babas are a recent phenomenon. In the last few decades they have become a force to reckon with and have acquired a huge following. They have political patronage and their one nod can mobilize millions of devotees. Their followers may call themselves nominally Hindus, but the truth is they are fed a secular ideology and are prime targets for conversion to Abrahamic religions, especially Christianity.

Hindu Dharma prides itself on its adaptability. In response to challenges, it has always produced reformers, saints and scholars who reestablished the religion on a firm basis. When it was challenged by Buddhism in ancient times, scholars like Kumarila Bhatta and Adi Shankaracharya reestablished it. Nayanars, Alwars, Acharya Ramanuja and Acharya Madhwa and countless others brought the doctrine of Bhakti to prominence.

In next few centuries, Bhakti movement spread to north Bharat and we had such great saints as Tulsidas, Nanak, Surdas, Ravidas and Kabir. Kabir criticized all religious orthodoxy with equal vigor, but even he took deeksha from Ramanand. All the Bhakti saints were deeply Hindu in their outlook.

The new age movements by Secular Babas claim to continue the legacy of original Bhakti movements, but betray a lack of coherent worldview and attachment to Hindu Dharma. I will not take any names, but discuss the general features of such movements, reasons why these proliferated and how it is a dangerous trend for Hindu society.

Where did the Hindu society go wrong?

How did this come to pass? The secular Babas did not rise until the 20th century. However, the start had been already made in the 19th century. Consider the words of Keshub Chandra Sen, a great leader of Brahmo Samaj who later founded many religious organisations : “Our position is not that truths are to be found in all religions ; but that all the established religions of the world are true.“

In the 19th century, people made fun of Sen, but in the 20th century, his words became an axiom of Bhartiya leaders. Mahatma Gandhi, a political and spiritual leader rolled into one, promoted this line of thought with all his goodwill. So we even had Quran recital in temples, though the reverse was never attempted. Famous bhajans like “Raaghupati Raghav Raja Ram”  were perverted with unnecessary insertion of Allah, Raheem and Kareem in its lyrics. Even when his disciple Muhammad Ali Jauhar declared that Gandhi was worse than a fallen and characterless Mussalman, Gandhiji continued on the same path.

Gandhji was instrumental in mainstreaming this idea of ‘secular’ Hindu Dharma. He did what Keshub Sen could not do, but the genesis of the problem is much deeper. Before 1830s, education in Bharat was traditional and imparted by village schools called pathshala. Contrary to what people claim today, these pathshala were open for all Hindus and imparted worldly as well as spiritual knowledge. According to Dharmapal, a Gandhian scholar, Bharat’s literacy rate was much more than that of Europe in the 18th century! Indeed, many of the innovative features of these pathshalas were copied by the British themselves.

The British uprooted this system in 19th century and replaced it with Macaulay’s system. The aims of this system were: “... to form a class who may be interpreters between us and the millions whom we govern, –a class of persons Indian in blood and colour, but English in tastes, in opinions, in morals and in intellect.” It is to be noted that the high officers of East India Company like Charles Grant were also energetic evangelists. Macaulay himself called Hindu Dharma a “false religion” in his famous minute. Naturally, their education system was geared towards making Bharatiyas sympathetic to Christianity and to detest their own religion.

Until the onset of 20th century, it did not work very much. The enrollment rate in schools was low and those who enrolled, also got some form of religious instruction at home or the village pathshala. In 20th century, certain factors including the communication revolution by TV and radio, spread of literacy and cinema helped in spread of these distorted ideas. The temples were taken over by the governments and Hindu children were deprived of religious instruction. This spiritual vacuum was filled by the half baked ideas of secular Babas.

The spread of influence of secular Babas is a loss to Hindu society in many ways:-

What could be done?

It is clear that these secular Babas and their circus has to be stopped. However, Hindu Dharma is not a strictly defined religion. In any other religion, Islam, Christianity and Sikhism etc, such Babas and their followers would have been excommunicated. Hindu Dharma has to deal with them in a different manner.

The secularization of Hindu Dharma, that started in the 19th century has taken epidemic proportions in the 21st century. Secular Babas run business empires of hundreds of crores while being involved in all sorts of immoral/illegal activities and when caught, Hindu Dharma is blamed for their indiscretions. There is no legal way to stop them, but efforts by Hindu organisations, media and general public can expose them and in time make Hindu Dharma stronger.