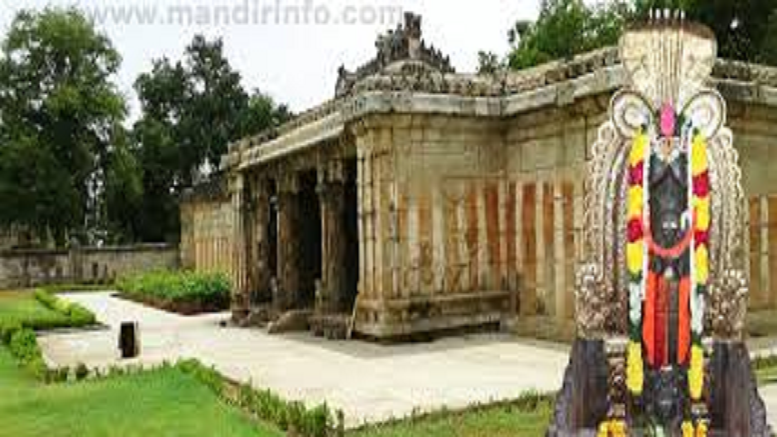 Gudimallam is a small village in the Yerpedu mandal of the Chittoor district of Andhra Pradesh. It is ten kilometers north-east of Renigunta  Railway Junction, and around 25 kilometers from Tirupati. Gudimallam is well-known for the temple dedicated to Bhagwan Shiva and is popularly known as “the Parasurameswara Temple.”

This is a very old lingam with a full-length figure of Bhagwan Shiva, housed in the garbhagriha of the temple. This is perhaps the second oldest lingam associated with Bhagwan Shiva discovered so far, and it has been dated to the 2nd/ 3rd century BC. The Mundeshwari temple in Kaimur district, Bihar is believed to be the oldest functioning Shiva temple of Bharat as the archaeological evidence suggests that the shrine dates back to at least 635 CE.

This is the only sculpture of importance to survive from ancient South Bharat much earlier than the sculptures made under the Pallava dynasty from the 7th century AD onwards, and its uniqueness lies in the total absence so far of any other Shiva deity resembling this image in an even remotely similar manner anywhere in South Bharat.

Some of the copper coins obtained at Ujjain and belonging to the 3rd century BC contain figures which resemble the lingam of Gudimallam. A 1st century sculpture in the Mathura Museum also contains a figure resembling the Gudimallam Shiva.

Estimates of the date of the temple vary considerably, but it is usually dated to the later Chola and Vijayanagara periods, so possibly a thousand years later than the sculpture. The lingam was originally sited in the open air, with the rectangular stone surrounding it which still remains today. The temple free for worship, but is under the protection of the Archaeological Survey of India (ASI) since 1954.

The idol of standing Shiva has two hands, the right one holds a ram by the hind legs, head hanging downwards. In the left hand, Shiva carries a globular pot and a battle axe (Parasu) rests in the left shoulder. Shiva stands on the shoulders of a crouching dwarf yaksha whose features are unique. The image of Bhagwan Shiva carved out signifies a fierce hunter.

The standing form of Bhagwan Shiva reveals Vedic and protopuranic concepts of Rudra. This village is also referred to as ‘Viprapita’ or ‘Brahmana Agrahara‘.

It is believed  that Trimurthis are visible in this lingam – Bhagwan Brahma in Yaksha Roopam, Bhagwan Vishnu in Parasurama Avataram and Bhagwan Shiva in Purusha Linga akaaram.

The earliest inscription belongs to the Bana’s (a feudal royal family under the Pallavas, circa 842-904 AD) and the latest inscription to the time of Yadava Devaraya (AD1346). An inscription of the time of Vikramachola indicates that the temple had been completely renovated in 1126 AD with Gopura and the well.

The temple has a serene atmosphere and pilgrims will feel the aura of spirituality in its calm and peaceful surroundings.

How to reach Gudimallam temple?

The temple is well connected by road, train and air. It is located around 25 Kms from Tirupati and 10 Kms from Renigunta. Nearest railway stations are Renigunta and Tirupati. Tirupati airport (near Renigunta) is 18 Kms from the Gudimallam temple.