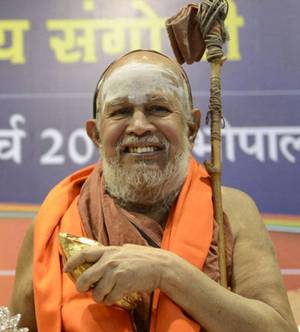 Sri Subramaniyam, born on July 18, 1935 at Irulneekki in Thanjavur District had Veda Adyayanam at Tiruvidaimarudur. Under the direction of Sri Chandrashekharendra Saraswati Mahaswamigal, he was initiated into Sanyasa on March 22, 1954 and was declared as successor for the Kanchi Kamakoti Peetham and given the Sanyasa name Sri Jayendra Saraswati Sri Pada. In the footsteps of the Mahaswamigal, he too undertook yatra throughout the country.

He attracted people from every nook and corner. In 2002, he broke a critical stalemate by offering worship at Harijan run temple in Madurai. The Veerakaliamman temple in the Melur region of Madurai, which serves the religious needs of eighteen villages around it, has a Harijan priest. When about 250 people were converted en masse to christianity in this region by a Canadian padre, the Shankaracharya gave them an unexpected visit and offered worship at the temple, shattering several myths and assumptions about divisions in Hindu society. The Shankaracharya apart from this also honored the music composer Ilayaraja of Harijan community in the Matha breaking the popular propaganda that the Matha doesn’t honor people from non-brahmin community.

Along with visits to many Harijan colonies, the Kanchi Matha, under Jayendra Saraswati Sri Pada, directly offered medical assistance and other basic needs. The matha established many medical and educational institutions which provides good qualities and low cost services for all communities without any discrimination.

He intensified the activities of the Matha to cover new social objectives -education, health, employment, temple renovation etc. In fact the medical institutions of the matha in Hindu Mission Hospital, Kanchi Kamakoti Childs Trust Hospital etc., have done spectacular service in providing treatment to underprivileged people. It is due to his untiring efforts, Kamakoti Peetham established religious and social institutions in many parts of the country. Kamakoti Peetham has now become a beehive of socio-religious renaissance.

In 1988, the King of Nepal had erected an arch “Welcome to the only Hindu Kingdom in the world” at the instance of Sri Jayendra Saraswati. In 1998, Sri Jayendra Saraswati Swamigal became the only Sankaracharya after Adi Sankara to visit Kailash Manasarovar. During his visit to the holy site, he also installed the idol of Adi Sankara. He had the unique distinction in being honored by both Nepal and Chinese Governments.

In known recent history, he is the only Sankaracharya to visit Dhaka in June 2000. In honouring His visit, Sri Dhakeswari Temple named the entrance to the temple as “Sankaracharya Gate”. His most notable contribution yet is the establishment of the Sri Chandrasekharendra Saraswati Viswa Mahavidyalaya, a Deemed University in the name of His Guru.

HH Jagadguru Jayendra SaraswathySankaracharyaSwamiji attained brahmaiyam this morning at 7.15am.His health was not that bad to shed his mortar coil now but decided to do so by divine will. His service to Sanatanadharma is immense & extraordinary.He fulfilled all his Guru's wishes pic.twitter.com/59Q3O6hCAU

The acharya attained siddhi on 28th February 2018 about almost fifty four years after attaining sanyasa. His tenure as a sanyasi will always be remembered for the great deeds he accomplished and the barriers he broke in Hindu society setting a new example for Hindu unity and protection of dharma at a time when Tamil Nadu was witnessing a religious conversion spree under the garb of atheism. The Brindavana Pravesha of Sri Jayendra Saraswati Sri Pada will be performed on 1st March 2018 from 8 AM.