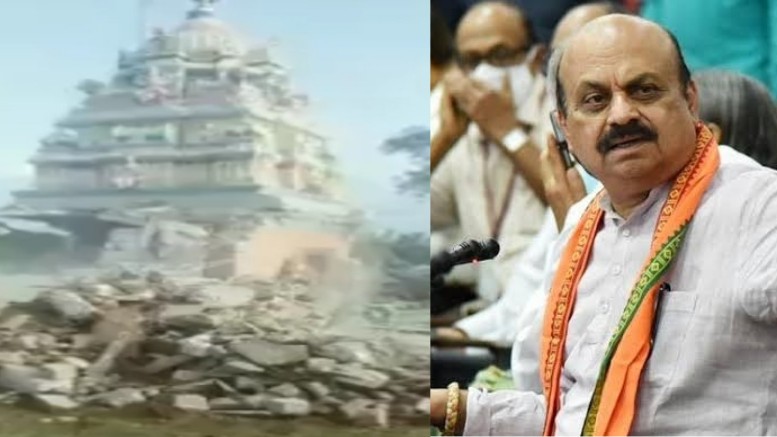 Damning details have emerged about how bureaucrats in Karnataka planned to demolish temples every week by setting targets. After Mysuru MP Pratap Simha took the matter of the 600 year old temple being demolished to CM Basavaraj Bommai, the demolition drive has been temporarily halted. Mysuru Deputy Commissioner has been served notice to submit a detailed report about the demolition drive.

The Karnataka HC in its order passed on 14.12.2020, asked the government to identify the unauthorised structures built on or before 29.09.2009 following the SC guidelines. It also directed the government to regularise/ demolish/ relocate the identified unauthorised structures. In this regard the Chief Secretary(CS) of Karnataka government, P.Ravi Kumar had sent out a circular setting a target that at least one illegal structure should be demolished in a taluka/division every week.

The Mysuru district administration had prepared a list of 93 religious structures one of which turned out to be the 600-800 year old Mahadevamma temple in Nanjangud. While it was assumed that the CS acted on his own accord and made such an insensitive decision as a bureaucrat, news reports suggest that it was part of the HC order.

Even though the unauthorised structures were identified long ago, allegedly no action to remove them was taken till recently. Dissatisfied with this the Karnataka HC pulled up the CS and asked him to submit regular reports on the action taken to remove these structures. As per the information available in media reports, 6,395 religious structures across the state have been identified as unauthorised.

Out of that 2887 structures have been cleared so far in 12 years since 2009. Only 1242 structures were built after 29.09.2009 out of which 1054 have been cleared. It shows that very few of the 2989 structures to be demolished were built after 2009. Karnataka HC is still hearing the suo moto case on this issue and was upset when it came to know that only 5 illegal structures out of 382 in Bengaluru were demolished by the city corporation. The court has asked the CS to file affidavits periodically and warned that failing to do so will invite contempt.

While it is not clear when this warning was issued, it could have pushed the CS to set targets. Relocating or demolishing illegal structures cannot entirely be opposed. But the CS misinterpreted SC guidelines and directed to ‘demolish’ the structures instead of ‘relocate’ incase they were old. Undoubtedly, in this process temples were demolished in large numbers as they are easy targets. In their eagerness to achieve the target and callous attitude towards Indic values, government officials failed to properly examine whether the identified structures were really ‘unauthorised’ and ‘illegal’.

This resulted in an ancient and historically important temple being demolished. At this point it is unclear how many temples of historic value were demolished thanks to overzealous officers bereft of respect for Indic values. However destruction of Mahadevamma temple has brought this issue to the fore and the CM has instructed to stop the demolition drive till the SC order is studied in detail and new guidelines are issued.

The specific incident has proved how bureaucrats and politicians act with sheep mentality when it comes to Hindu issues. It has shown Hindus how deadly the combination of far reaching judiciary, ideologically disconnected politicians and overzealous Babus can be. As details of how the demolition drive was planned from top down emerge, the faith people have in BJP as a pro-Hindu party is starting to waver. While the politicians act as though they were unaware of the ongoings of their own government, people see it as an indifferent attitude towards the Hindu community. It remains to be seen whether BJP realises its mistake, apologise for it, and perhaps make amends by starting work on freeing temples as promised in its manifesto.