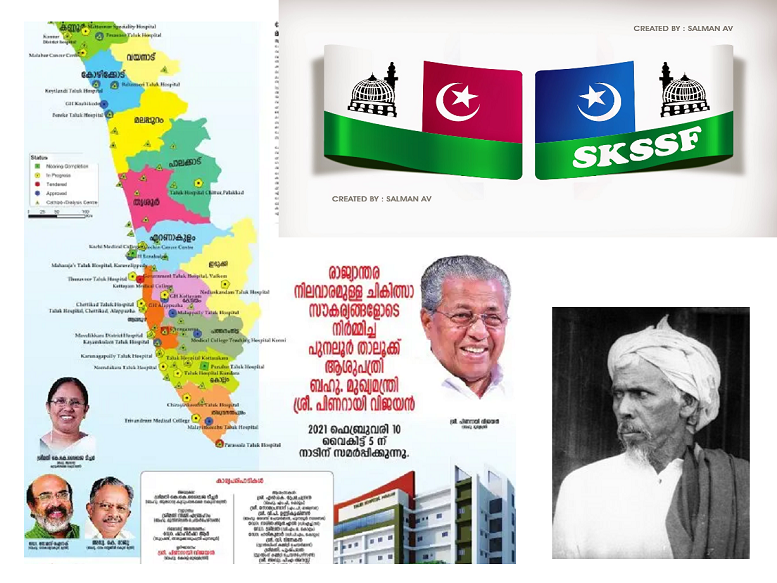 Samastha Kerala Sunni Students Federation (SKSSF) is the student wing of the Samastha Kerala Jamiat-ul-Ulema. Anvar Sadiq Faizy the editor-in-chief of a magazine associated with SKSSF has now asked for a separate state called ‘Malabar’ to be bifurcated from Kerala.

The key Muslim-majority districts in North Kerala (Malappuram/ Kozhikode/ Kasargod) have to be glued together (along with other districts) to form the new state, he argues. To achieve this he wants followers to hit the streets in a Telangana model agitation.

Titled Malabar package, Sadiq blames both the Communists and the Congress for the current state of affairs of Malabar which he says is poor in relation to the south of Kerala. He puts forth certain facts to add credence to this allegation of neglect and nepotism.

The rant itself was born from a three-quarter-page color advertisement that appeared all over print media released by the CPM government in power. It highlighted the claim that 3000 odd crores have been spent to upgrade Government hospitals in the state. It featured the rockstar of health experts worldwide, Ms. K K Shailaja (Kerala’s Health and Social Welfare Minister), and other assorted leaders like Pinarayi Vijayan and Thomas Issac.

Attached was a map showing the district and the hospitals that were supposedly modernized. With just three hospitals in Malappuram and several in each district towards the south, it didn’t go down well with Sadiq.

Faizy’s Facebook post alleges that plus-two students in Malabar suffer from a shortage of seats while the ones in South Kerala have plenty of surpluses. It felt like an open threat to gain more seats for colleges and schools under their administration.

While the private buses control much of Malabar, the Kerala State transport does the bulk of ferrying in the South. His lack of knowledge of public transport was evident when one considers the fact that the State road transporter charges more than the private players!

Hinting at regionalism he questioned the logic behind maintaining the capital and the Secretariat at Thiruvananthapuram (at the southern end of the state) and then went in for an anti-Tamil tirade. Tamil Nadu begins where Thiruvananthapuram ends. Here too he conveniently forgot that one in ten (and an even bigger average among Malabaris) Keralites work in countries all over the world; much more work in different parts of Bharat.

His solutions for these problems are even more absurd. Option one is to maintain an additional Secretariat at Kozhikode (at the heart of Malabar), govern three days a week from there, and implement a special package. Religious, cultural, and political outfits have to play an active role in this separatism, by speaking up now; the clamor has to happen now since elections are due in a few months and political parties are in the process of working on their election manifestos, he added.

It’s his second option that has raised eyebrows. Instead of crying and wallowing in sorrow, he exhorts his supporters to hit the streets and demand for a separate state that he calls the Malabar State. This radical approach has to be modeled on the Telangana State. Telangana was carved out of Andhra Pradesh and is now headquartered out of Hyderabad.

The original Samastha was formed in the 1920s in the wake of a Salafi Movement that swept across many parts of old Bharat, especially Malabar.

It was a time of one of the greatest Hindu pogroms ever witnessed in Kerala. Many were displaced, raped, killed, maimed, and converted to Islam during the riots that took place exactly a hundred years ago in Malabar. All this was done at a time when Gandhi was trying to add a few members to his Indian National Congress using the Salafi Khilafat movement to his advantage while remaining criminally silent against the ethnic cleansing of Hindus by Islamists.

The Samastha as it’s called is a group of Sunni Muslims who believe in a rigid school of thought called the Shafi`i school of Islamic law in Sunni Islam. Based out of the coastal belt of north Malabar and Karnataka they are also found in the Deccan of Hyderabad.

They manage the Islamic education system in Kerala without interruption or interference from either the State or the Central government. It is alleged that funding is mostly foreign, enormous, and shrouded in secrecy. Along with a splinter group called Samastha Kerala Sunni Jamiat-ul-Ulema, they run thousands of mosques, madrassas, Arabic, and professional colleges.

All Sunnis in Kerala are associated with either one of these organizations. Sunnis also form the backbone of the Indian Union Muslim League (IUML). With such a vast voter base they enjoy considerable clout especially in North Kerala (with a huge Muslim population).

The essence of these demands is a Muslim majority state, upon receipt of which the next step would probably be an appeal for independence. History reminds us of what happened during 1947 when separatists wanted a Muslim state. It is alleged that many Islamic organizations in Kerala actively agree with this demand for the creation of a Muslim majority state.