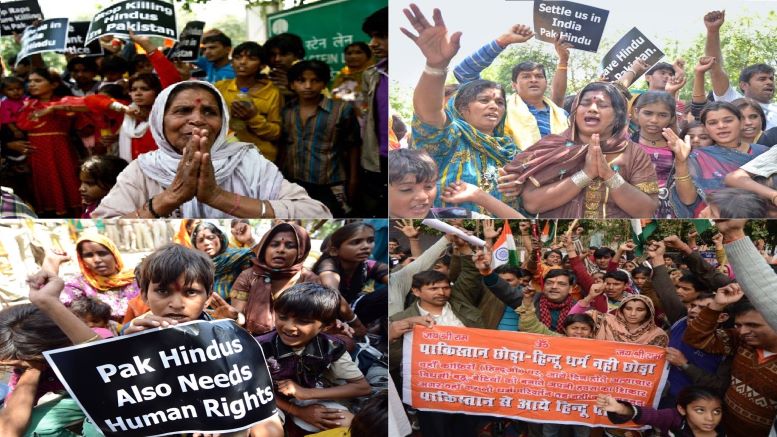 Hindu Sindh Foundation (HSF) is a US-based nonprofit organization that works for the upliftment of Hindus in Pakistan’s Sindh. 90% of the Hindu population here is below the poverty line. The organization raises issues concerning the community both locally and internationally. HSF mainly works for women/girls who are vulnerable and also provides education to the marginalized community.

The organization held an online talk session to highlight the difficulties faced by Hindu refugees from Pakistan. The session discussed the problems faced by them in Bharat with respect to obtaining jobs, the conditions they are forced to live in, and difficulties in obtaining Bharatiya citizenship among other things. The session also attempted to throw light on why some of them chose to return to Pakistan despite the persecution in the Islamic nation.

Religious persecution, forced conversions, rapes, and abductions are some of the problems faced by Hindus in the Islamic nation. There are two categories of asylum seekers from Pakistan. The first belongs to the middle class and the second is extremely poor and uneducated belonging to the scheduled caste groups. While the well-to-do obtain long-term visas to travel to Bharat, the poor often have to make do with a pilgrim or group pilgrim visas.

The pilgrim visa allows a maximum stay of 15 days yet the circumstances in Pakistan are so threatening that many prefer staying on illegally. A long-term visa (LTV) is sought by those who intend to stay back and subsequently obtain Bharatiya citizenship. LTV seekers usually are well-off and have some relatives in Bharat.

There are also allegations of discrimination against Pakistani refugees in comparison to those from Afghanistani and Bangladesh. The entire process is online which makes it difficult for the uneducated asylum seekers from the Islamic nation. The speakers highlighted the fact that Bharat has not signed the 1951 Refugee Convention or its 1967 protocol.

The biggest difficulty for those fleeing to escape religious persecution is the inability to seek jobs here as they aren’t granted work permits till they obtain Bharat’s citizenship. The living conditions in the refugee camps are nothing to boast about either. This is where organizations working for the refugees step in. Those working on the ground brought out the point that there are limitations to their work as well.

New Delhi-based Human Rights lawyer-activist Shri Rajesh Gogna is one of those who work on the ground. He is the Secretary-General of Human Rights Defense International (HRDI) He admitted that the living conditions in some of these camps are pitiable. He opined that Pakistan is a hell hole and to escape persecution, the Pakistani Hindus come to Bharat.

He also added that Bharat is incapable of absorbing and providing for a large number of persecuted minorities as it has a sizeable poor population. He pointed out that they are largely landless laborers. He stated that they are working with minority politicians and human rights activists in Pakistan so that the lives of minorities are safeguarded and they don’t have to move to Bharat.

Shri Jai Ahuja from Nimittekam, an organization working for the well-being of refugees of Hindu, Sikh, and other minorities of India’s neighborhood, said that they are working closely with refugees residing in Rajasthan. However, he refuted claims of Pakistani Hindu refugees being deported. He said that there have been a few unfortunate incidents where some have returned to Pakistan.

He stated that some of them stray into the no-go zone on the border which causes problems and added that they are raising awareness regarding the same among the community members. He stated that their organization has been working with the authorities to get work permits for the refugees and even got their children admitted to government schools here.

The fact is that not everything is hunky-dory for the Hindu refugees. Some of them who participated in the session brought out some of the issues faced by them. The biggest hurdle is earning their livelihood as they not only find it difficult to find jobs due to the lack of work permits but are also looked at with suspicion since they are from Pakistan.

As already pointed out, most of the refugees hail from poor backgrounds and hence cannot afford the rental costs. Additionally, they have to make do with menial jobs as they are uneducated. It is an undeniable fact that they are neglected as they aren’t votebanks. The prohibitive cost of living is one of the major factors that makes the Pakistani Hindus return where they don’t have to at least pay rent. It must be remembered that when one chooses to return, he takes along several of his family members.

There are both positives and negatives but a lot more needs to be done to ease the life of the Pakistani Hindu refugees who have returned to their homeland in search of a better life. None should be forced to return to a land where they are persecuted only because they choose to follow their faith.