Anti-Hindu filmmakers normalizing Hindudvesh in the name of creative license 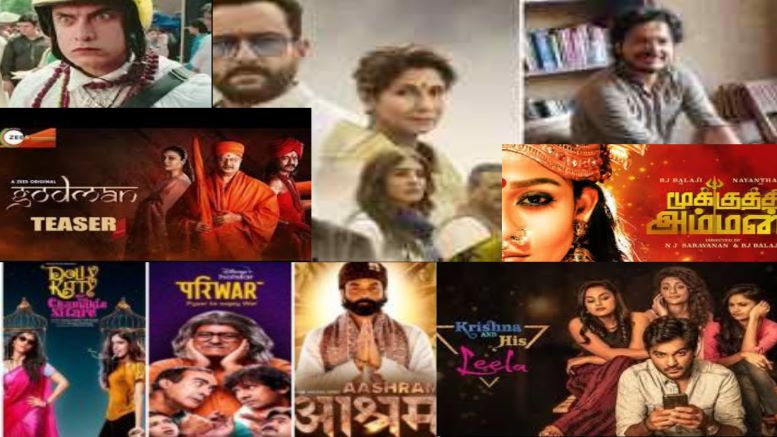 Hindudvesh that was promoted albeit subtly by Bollywood has now not just been normalized but also been taken to unacceptable heights with the advent of OTT platforms using creative license/freedom as an excuse. The assault has only been on the rise with each passing series/movie which uses the as-yet unregulated OTT platforms and ever since the nation has rediscovered its Hindu roots in 2014.

Bollywood has been promoting Hindudvesh in an indirect and understated manner that works at the subconscious level for several decades now. In recent times, however, this hate is direct and has been amplified. Tandav is a culmination of all the hatred that had been directed at the Hindu society in an attempt to make them feel ashamed and guilt-trip them.

In early Bollywood movies, you always had a devout Hindu villain who was a rapist or murderer or oppressor or all of this put together and a Muslim messiah who was always portrayed as a good-hearted human being out to serve society. This then transitioned into atheist heroes harboring hatred for everything Hindu including a ‘self-serving’ Hindu Devata and finding solace in dargahs and/or churches.

The last few years have seen an exponential rise in the direct attack on Hindu Dharma with feminazis, seculars, liberals, and every known Hindu hater group joining hands to bring movies/web series to life that doesn’t even hide its hatred for Hindu traditions. And all this is done in the name of creative license!

Ekta Kapoor produced Dolly Kitty aur woh chamakte sitare was about a married Hindu woman, who has two kids, “sleeping” with a Muslim delivery boy and her cousin who works in a call-center selling ‘gift items’ using ‘sex chats’ for the same. Disney Hotstar’s Pariwar mocked customs such as Yagna (ritual worship) by making the Pandit (priest) performing it utter some incoherent nonsense in the name of mantras. It even had scenes where one of the characters heap insults on the priest performing the havan.

Prakash Jha’s web-series “Aashram”. Aashram (hermitage) is the story of a “Baba”, conveniently Hindu even if many criminals turn out to be Christian Padres and Islamic Maulvis, who has amassed followers but is actually a rapist and murderer. Sacred Games, Ghoul, Leila, Pataal Lok, and Tandav among others have followed the same template of putting out anti-Hindu content directly or indirectly.

This trend is not limited to the Hindi industry alone and has extended to regional industries as well. Zee 5’s Tamil web-series Godman was both anti-Brahmin and Hindudveshi in keeping with the Periyarist mindset that plagues the state. Nayanthara and RJ Balaji’s Mookuthi Amman cleverly disguised Hindudvesh as devotional content.

Anushka Sharma produced Bulbbul featured a Bengali song written by Shah Abdul Karim in which he has used derogatory language and abuses for a character called Kaanu/Kanha (Kanha or Kanhaiya is the loving name used for Sri Krishna by his devotees) calling him ‘haramzada’ that translates to bastard in English and refers to Radha (Devi Radha is the divine consort of Sri Krishna and their spiritual love exemplifies devotional service for millions) as ‘kalankini’ (ill-reputed or one who is known for having illicit affairs).

Telugu film ‘Krishna and his Leela’ directed by Ravikanth Perepu and presented by Bahubali fame Rana Daggubati, whose family production house jointly produced the movie along with Sanjay Reddy and Viacom 18 Pictures, used characters from Hindu Itihas as masala for a salacious ‘rom-com’ (romantic comedy) where their Krishna has several affairs, one of his girlfriends is Radha and the film has sexually explicit content. Both these were broadcast on Netflix which is a repeat offender.

If we thought Amir Khan starrer PK was insulting Hindu Devis and Devatas, Tandav surpassed all the shows and movies in its Hindudveshi content by launching a direct and indecent assault on Hindu Dharma. Although the makers of the movie issued an apology and offered to remove the scenes, it is amply apparent that the scenes had no connection to the plotline and unlike director Ali Abbas Zafar’s claim was intentionally inserted in the series with an aim to hurt Hindu sentiments. Zafar had to backtrack after severe backlash and made a feeble attempt to present it as ‘unintentional’. The stand-up comedy scene is no different with almost all of them making a template out of Hindudveshi themes.

Ex-AAP leader and alleged journalist Ashutosh opined that the rate at which people’s (read Hindus) sentiments are getting hurt, soon creativity would go for a toss, and writing as well as film-making would be reduced to appeasing a section of the society/governments. The left-liberal gang has always been championing freedom of speech/expression as well as creative license as long as the content is Hindudveshi, the moment a movie/show is about Christianity or Islam the same set of people is concerned about religious sentiments, creativity be damned.

When the Christians wanted plays such as Agnes of god or movies such as Shiney Ahuja starrer Sins, Da Vinci Code, and Angels and Demons among others to be banned, the secular cabal didn’t feed the need to lecture about creative freedom. The same cabal conveniently either kept quiet or supported the demand of Islamists who wanted to ban movies such as Vishwaroopam and Muhammad-Messenger of god for hurting Muslim sentiments.

Movies/shows that present the reality of Islam and Christianity are never acceptable to this secular liberal gang but falsehoods about Hindu Dharma is passed off as creativity and creative freedom. The cabal is only exposing its hypocrisy but Hindu society isn’t taking kindly to the repeated insults that Hindu Dharma is subjected to time and again in the name of creativity.

The line of tolerance has been crossed and as Justice Rohit Arya of Madhya Pradesh High Court observed while hearing so-called stand-up comedian Munawar Faruqui’s bail plea “But why do you take undue advantage of other’s religious sentiments and emotions. What is wrong with your mindset? How can you do this for the purpose of your business”?

Justice Arya was also of the opinion that such people must not be spared. Hindus have always taken the legal route and it is high time as Justice Arya pointed out that such people are taken to task. Hindu tolerance has for long been taken as a weakness which has emboldened this Hindudveshi cabal to cross the line frequently and their Hindudvesh has now taken Hindus must stop tolerating Hindudvesh which is passed off in the garb of creative license.