Not so funny : the Hinduphobia in stand-up comedy must stop 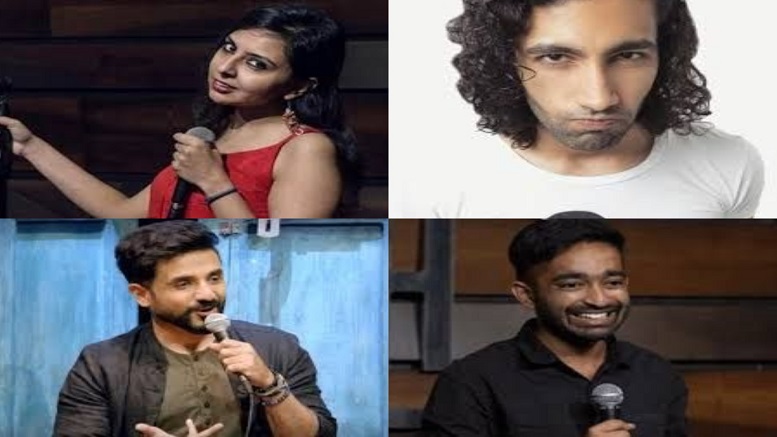 Stand-up comedy is a relatively new genre of entertainment in Bharat. Influenced by iconic US TV shows like Seinfeld, many aspiring Bhartiyas started attending such shows and many left jobs to start working as ‘stand up comedians’. The live audience, expensive tickets and new way of presentation has clearly appealed to youth in metros who had seen a paucity of entertainment options up to 1990s and early 2000s.

So the genre was an instant hit. Hundreds of troupes and studios cropped up to cater to the demand and their clips started getting viral on social media. But how to beat the competition? Insulting Hindu Dharma and Hindu icons became the easy way out!

Recently, a little known comedian shot to limelight. Agrima Joshua, based in Mumbai made some flippant comments on Chatrapati Shivaji, the Hindu Maratha King who wrote the script for demise of the mighty Mughal empire. The comments were in bad taste and not even funny. This upset many Hindus, specially Marathas. Some even threatened her in an unseemly manner and a few of them made a scene at the venue where the show had happened. Apparently, Joshua is not afraid of ‘speaking truth to power’. When she was heckled on social media, she appealed to Uddhav Thackeray for help against ‘BJP IT cell’. It later became clear that members of MNS and Shiv Sena were also opposed to her comments, more aggressively so.

After posturing for a few hours that she will not apologize, she apologized twice, first in English and then with a video in Hindi. In her apoolgy tweet, she marked Shiv Sena, Congress, NCP and MNS leaders – basically the parties which unapolgetically wield street muscle in Maharashtra. The ‘BJP IT cell’ she had earlier accused of targeting her did not get any apology! So much for the ‘fascist BJP’ and ‘speaking truth to power’!

Another piece of casual Hinduphobia that everyone missed in her tweets is the twitter handle of her friend and fellow ‘comedian’ Ayushi. Insulting a revered figure in Hindu Dharma known for her devotion to her husband, she has named her handle ‘@sluttysavitree’. Now if her name was Savitree, I would have thought nothing of this. But observe how our sacred spaces are so casually invaded and brushed aside as comedy!

Of course, Agrima is not the only comedian who feels entitled to insult Hindu icons and Hindu Dharma. Indeed, this is her latest gimmick and after this her timeline has come under public scrutiny and revealed many more Hinduphobic tweets. But let us move to other unfunny ‘comedians’.

Aadar Malik is another comedian with a huge following. Nephew of the controversial sexual-harassment accused musician Anwar (Anu) Malik, Aadar has been recently called out for making fun of Ganapati and Bhagwan Shiva. Watch in the video below.

Standup comedian Aadar Malik (@TheAadarGuy) making fun of our Gods Ganapati and Shiv Ji. This is blasphemy, he deserves to be held responsible for the same. He should be made an example so cheap artists like him don't use cheap comedy for cheap audience.pic.twitter.com/SfSaPFwflW

Kenny Sebastian is supposedly a big name in ‘Stand up Comedy’ in Bharat. He has 1.7 million followers on twitter. He was recently in news for abusing profusely on twitter and Instagram, of which National Commission for Women has taken cognizance. Many videos of him displaying Hinduphobia have been pointed out recently. In one such video, he thanks God that all people speaking Sanskrit are dead. Similarly, Alokesh Sinha was hauled up for insulting Hanuman Chalisa.

Making a list of such indiscretions will take months! But some gems are presented below for your consideration:-

Hello, @thevirdas are you in Mumbai?

Can't you do a Stand-Up Comedy without making fun of Lord Ganesha (Ganpati)? pic.twitter.com/okK5CM5KdT

It is to be noted that these comedians rarely, if ever, make jokes on Islam and Christianity. Indeed, when they try and make fun of these religions, they usually have to apologize in person.

Why are Hindus targeted?

This question keeps bugging us. This crass and casual Hinduphobia is not limited to ‘comedians’, we can see this in film industry, media and also academia. The reasons are common in all these areas:-

How to stop Hinduphobia in such events?

There are some immediate steps we need to take and then some long term steps. Immediate steps should have the capacity to make people desist from such behaviour.

These could include mass boycott of such programmes, fling legal cases against such Hinduphobia and also exposing them in front of other Hindus. One way you can help is by sharing this article in WhatsApp groups and Facebook etc.

The long term solutions are institutional in nature. First of all, we need control of Hindu temples in hands of common Hindus, so that the revenue can be used for benefit of the Hindu community. These have served as focal points of the Hindu community for thousands of years and are capable of imparting religious education. Secondly, we need to start documenting such cases of Hinduphobia and act on these in a concerted manner. The Anti Defamation League plays a similar role for Jews in cases of anti-semitism. We need a broad-based and professional organisation on that model. Thirdly, textbook reforms should be our priority. All traces of Hinduphobia should be removed from school and college textbooks. We must remember that textbooks not only impart education, but also ideology! Currently, these are imparting communist ideology to our children.

The incidents of Hinduphobia by comedians, media persons, movie stars and academics will continue unless we take certain urgent steps. This sense of urgency should be guided by the fact that with incidents of Hinduphobia, conversions out of Hindu Dharma also increase. Already, our policies have lost Nagaland, Mizoram, Meghalaya, coastal Tamil Nadu and large parts of Andhra Pradesh to hands of Christian missionaries. Cases of love jihad continue to increase. One should question why Hindu girls adopt Islam so easily and the reverse does not happen on any significant scale? Why are Hindus getting converted to Christianity in droves? It is certainly not due to the superiority of Islam and Christianity.