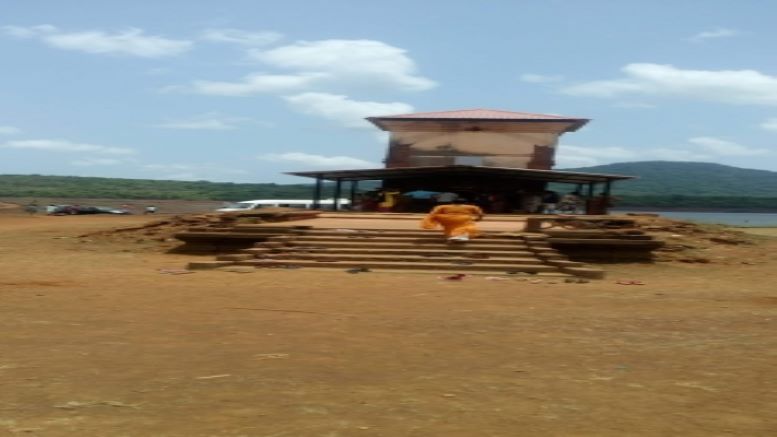 Kurdi, a submerged village in south Goa, emerges once every year when summer is at its peak and the catchment area of the Selaulim dam nearly dries up.

This year, thanks to unseasonal, but heavy pre-monsoon showers, Kurdi has remained underwater. This has led to the cancellation of the Someshwar Maha Utsav, an annual festival held at the Someshwar temple when it surfaces in the summer months of April and May.

The cancellation of the festival has led to disappointment, especially among the former residents of the village, who were relocated by the government, after the construction of the Selaulim dam in whose catchment, the village lies submerged most of the year.

Gurucharan Kurdikar, a software engineer working in Bangaluru, said that the Maha Utsav had started in the year 2015 with a gathering of few people. It rose to around 6,000 people in the year 2019. “Because of COVID restriction for the last two years we couldn’t hold it in a big way, however, only ‘Abhishek’ was performed,” said Kurdikar, one of the organizers.

“For the last eight years, the displaced villagers are having celebrations at the temple. However, we couldn’t hold it for the last two years because of COVID restrictions and even this year as the temple remains underwater,” said another villager.

Subhash Phal Dessai, Sanguem MLA and Minister in Pramod Sawant’s government, told IANS that pre-monsoon showers are the sole reason behind canceling the festival. “Temple wasn’t exposed this year as pre-pre-monsoon shower continued to lash the area. Hence, the temple remained in the water,” he said.

Responding to the question of whether Salaulim Dam authorities failed to release water from the temple area, Dessai said that rain was only the reason. “Dam authorities are not at fault,” he said.

Some locals had complained that the failure of dam authorities to release water for irrigation, fearing a shortage of potable water, had resulted in the temple remaining in knee-deep water.

Someshwar temple dedicated to Bhagwan Shiva has remained intact despite being submerged for at least ten months in a year. About 630 houses located in this area were rehabilitated to other nearby villages for the construction of a dam that provides water to most parts of Goa. Now the whole area of this village (old Kurdi) remains underwater.

The dam was constructed five decades ago. Since then the displaced villagers visit the temple and offer a prayer in April and May when the water recedes.