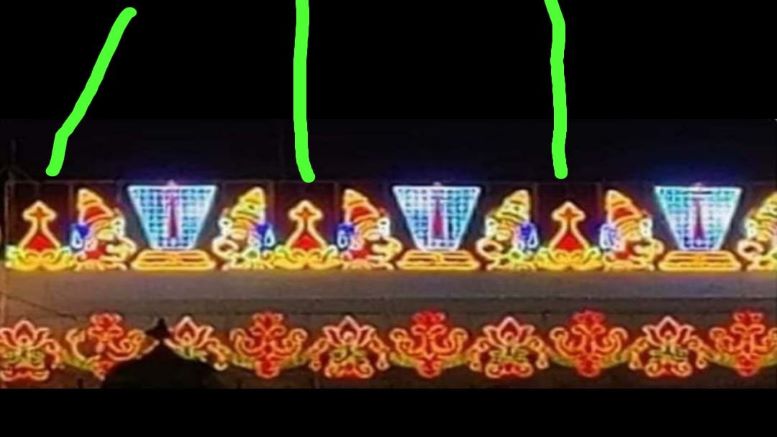 The TTD (Tirumala Tirupati Devasthanam) was forced to take down the crosses in the lighting arrangements after facing backlash from devotees on social media (SM).

Controversy erupts surrounds the lighting arrangements at Thirumala Tirupathi Devastanam. People says it looks like ‘Crosses’ when they are lit. After uproar on social media, the lights were removed. pic.twitter.com/SUHlURUpQS

Yesterday a massive controversy erupted after devotees objected to cross symbols put up on the lighting decorations at the Tirumala Mandir even as some others opined that these were not crosses but Kalash (holy pot). The fact, however, remains that the decorations when lit resembled crosses and considering the attempts by both Christian evangelical missionaries and Jagan Reddy-led Andhra government to Christianize the holy pilgrimage of Hindus, this is certainly unacceptable.

This is not the first time that the Tirupati Mandir has courted controversy. Tirupati has been on the radar of the Christian evangelists for a long time now and with Christian evangelical Jagan Reddy helming the Andhra government, the TTD has often been caught on the wrong foot.

Earlier there was an attempt by the Andhra government to sell the assets of the Tirupati Mandir. The decision had to be reversed after devotees raised objections regarding the same. Using the Chinese Virus pandemic as an excuse, the Tirumala Tirupati Devasthanams (TTD) which is controlled by the AP government was mulling liquidation of assets like land parcels and buildings donated by devotees to Sri Venkateswara to provide salaries of its about 22,000 personnel – if the temple does not reopen by June this year.

However, due to the collective power of Hindus, the proposed sale of Tirupati properties donated by devotees was put on hold by an order issued by the Andhra Pradesh (AP) Government. The state government issued a Government Order (GO) dated 25.05.2020 putting the sale in abeyance and issuing instructions to the TTD (Tirumala Tirupati Devasthanam) to not proceed in the matter until such time they undertake discussions with various stakeholders.

A senior Government officer working for the Government controlled Tirumala Tirupati Devasthanams trust was found to be in gross violation of her service rules by daily going to a Christian Lutheran Church in an official car. Ms. Snehalatha, Deputy Executive Officer in TTD’s Welfare Department, is reported to never take ‘Prasadam’ (food blessed after it is first offered to Bhagwan), but uses her official car to go to Church and also accepts gifts during Brahmotsavam, an annual festival conducted over 9 days in which the Utsava-murti of Sri Venkateswara, along with his consorts Sridevi and Bhudevi is taken on a procession around the temple town.

TTD has often been found inefficient and wanting as far as temple maintenance is concerned. Vakula Devi temple near Tirupati comes under TTD administration but is in a state of abject neglect and disarray. The deity herself has never been repaired and re-established within the shrine. The hill has become an unsightly and misshapen mass of blasted rock.

After an outcry from Hindu organizations, Hindu religious heads, and political party leaders expressed anguish over the pathetic condition of the temple and called for a ban on illegal mining activity, the TTD took up restoration work of the Vakula Mata Temple with an allocation of Rs. 2 crores including Rs. 15 lakh to be spent on fencing the premises on the hillock. However, local mining companies approached the Courts and got a stay order in 2010 preventing TTD from taking up renovation of the Temple.

In 2012, the High Court at Hyderabad vacated the stay and ordered the TTD to renovate and restore the temple to its former glory. TTD assured the Court it would comply with the order, but so far, no new work has been undertaken despite the push from locals.

After finding itself guilty of attempting to sell-off the Tirupati Mandir assets, the Tirupati Devasthanam was in the news when one of its employees was found guilty of being a crypto-Christian. It came to light that Shri A Rajasekhar Rao, Assistant Executive Officer (AEO) employed with the Sri Venkateswara (SV) group of temples and who was in charge of the Hundi counting department in the Tirupati Mandir is a Christian despite the fact that officially he declared himself Hindu.

It is high time the Tirupati Devasthanam gets its act together and respects the sentiments of Hindus.