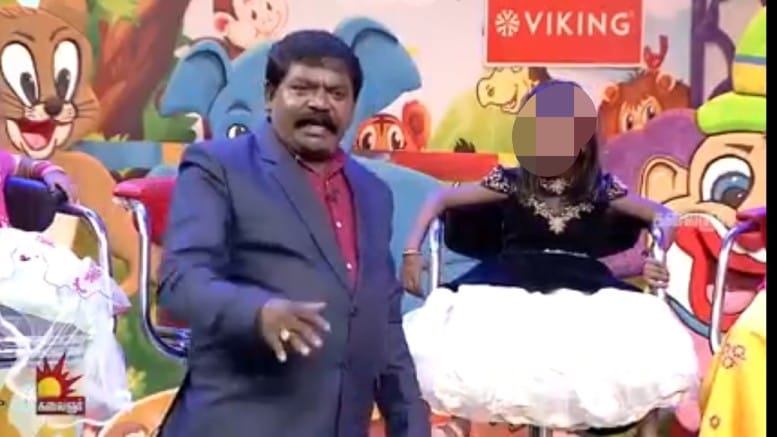 In a TV program for kids, Vibhuti, the sacred ash was mocked and equated with excretion of all kinds. Unsurprisingly the anchor who brought it up out of nowhere is a Christian and the channel which broadcasted the show is Kalaignar TV, owned by DMK’s first family.

In a video of Chella Kutties children’s program shared by kalaignar TV’s official FB page, towards the end, the anchor Iman Annachi aka Immannuel, asked everyone present in the shooting spot whether anyone knew how the sacred ash is prepared. A lady replied that it is prepared by burning cow dung cakes and adding fragrant elements to it. Immanuel repeats it in a mocking tone and asks whether it is true, feigning ignorance.

Another person, Ranjith, a news reader in Polimer News, replies, “Of course it is prepared by burning cow dung. Sometimes there is a bad smell while applying Vibhuti as it is prepared using cow dung”. The anchor says, “What are you saying! Many people eat it?”. Ranjith doesn’t show any revulsion or disgust and says that his daughter likes it very much and eats it often.

Anchor Iman goes to the little girl and says, “It is actually cow dung dear. Will you still eat it?”, the girl nods her head. He could have stopped there but he went on to mock the little girl saying, “We will eat it even after knowing huh? It doesn’t matter which shit it is. Is it that tasty? Maybe we should try licking cow dung once”. Anchor Iman joined DMK and campaigned for the party in 2021 assembly polls.

This is a classic case of Hinduphobia where children were mocked for wearing and sometimes eating Vibhuti discouraging them from proudly wearing religious symbols. Everyone knows that the sacred ash is prepared using cow dung and wood used for preparing prasadam in the temple kitchen. Yet Hindus have no problem wearing or eating a pinch.

There is another tedious and meticulous process of preparing pure Vibhuti. One of The Hindu articles explains the process as “dung cakes (viratti), karukkai (paddy) and hay are laid in layers with meticulous precision to the accompaniment of the chanting of mantras, including Sri Rudram, Chamakam and so on. Viraja homam is performed and the pile, called Muttan, is lit with the fire from this agni in the morning on Sivaratri.”

There are even rules as to how, when and where the sacred ash should be worn. It holds such value in the lives of Hindus. It would be difficult to not come across a person wearing Vibhuti in Tamil Nadu if one ventures out on the street. Yet DMK and its mouthpiece have the audacity to mock it. It is but the next step after making cow urine jibes.

The finance minister PTR Palanivel Thiagarajan and Mannargudi MLA TRB Rajaa had earlier made the “cow urine” jibe. Cow urine is used in many Ayurveda and Siddha medicines and sprinkled in buildings during gruhapravesam and yagnas. Yet DMK ministers and MLAs are mocking it to insult BJP supporters and North Indian Hindus. A DMK member and TV anchor intentionally bringing it up in a kids show is the next step of making Hindus feel guilty about wearing religion on sleeves.