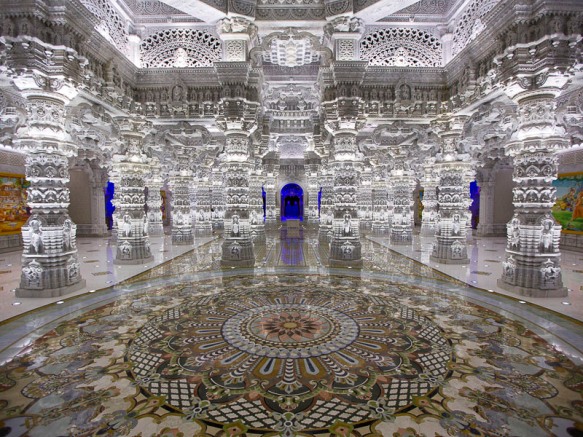 In yet another case of anti-Hindu sentiment in the West, the Bochasanwasi Shri Akshar Purushottam Swaminarayan Sanstha (BAPS) Hindu sect has been targeted by US media and their lackeys in Bharat’s media.

BAPS is a socio-spiritual Hindu organization with its roots in the Vedas which describes itself as a ‘volunteer-driven organization dedicated to improving society through individual growth by fostering the Hindu ideals of faith, unity, and selfless service.’

BAPS has constructed Swaminarayan temples all across the world and one of the largest temples in the US is being constructed at Robbinsville, New Jersey, USA which has a 400,000 strong Hindu community. Inaugurated in 2014, some parts of the temple are still being constructed.

On April 30, it was reported that the New Jersey Department of Labour (NJDOL) issued an order against construction contractor Cunha’s Construction Inc for repeat violations that include misclassifying workers. As per the report on this NJDOL order, “The NJDOL’s Division of Wage and Hour Compliance conducted site visits at two of the company’s current worksites, BAPS Temple in Robbinsville and BAPS Temple in Edison, after learning of the projects from workers. These inspections found the contractor was paying workers in cash off the books and did not have workers’ compensation insurance.” The order issued by NJDOL is against the American construction contractor company owned by one Nuno Cunha and not against BAPS which has merely hired the services of the construction contractor.

Following this order, FBI and US Department of Homeland Security agents descended on 11 May at the Robbinsville temple to probe the violations. There was also mention of a lawsuit being filed by some Bharatiya workers/ex-workers who had worked at the temple site.

However, the media coverage of this matter went overboard in targeting BAPS with frenzied articles aimed at blemishing the reputation of the organization.

To use labour violations by an American-owned labour contracting service as a means to whip up a frenzy against Hindus and to drag ‘casteism’ into any and every issue related to Hindus is a clear sign of the prevailing Hinduphobia of these media outlets. The entry of anti-Hindu activist orgs like Equality Labs and academics like Audrey Truschke to comment on the issue indicates that this has been a concerted exercise to attack Hindus and their sects.

Is it a coincidence that Hinduphobia has become more marked in the US after Biden became POTUS? Evidence suggests that anti-Hindu forces have gained traction in the Biden regime such as with the hiring of an anti-Hindu, anti-Modi diplomat as CIA  chief or a Kashmir-extremist supporter as Biden’s economic policy advisor. The blocking of vaccine raw material exports to Bharat while the country is struggling with the Covid second wave, despite US not needing those raw materials for its own vaccine production, has led to murmurs of a soft regime-change operation being put into motion.

Anti-Hindu hatred had been witnessed during the Obama regime when several episodes of Hindu temple desecration were reported from around the country. For example, there were 17 instances of vandalism reported between July and October 2014 in Virginia, incidents in February 2015 in Washington state, and incidents in Texas in April 2015. A Swaminarayan temple had been vandalized in the state of Kentucky in January 2019.

Regarding the targeting of BAPS, a twitter handle called Hindusamata pointed out that alleging that BAPS is ‘casteist’ is untrue since most devotees who visit BAPS temples are Patels who are not considered ‘upper caste’, and in any case Hindu Dharma does not endorse casteism.

If labourers have been exploited and labour laws violated as alleged, then workers must receive justice. However, the whole exercise seems to have focused on Hindu bashing rather than giving justice to the labourers who have allegedly been exploited. This becomes even more obvious when one finds that many of these reports which describe the case have unnecessarily dragged in caste and ‘Dalits’ without providing concrete numbers and have also dragged in BAPS’ alleged closeness to the Modi government when the issue is completely irrelevant in the case.

Significantly, most of the reports have left out the good work done by BAPS in USA and Bharat.

Fortunately, one report which detailed the whole case at length also spoke about the good work done by BAPS:

“Along with the temples, BAPS is involved in community and charity work. During the peak of the COVID-19 pandemic in the U.S., the organization donated food and masks to hospitals across the country. Currently, as India is grappling with a devastating second surge of the coronavirus outbreak, BAPS Charities, through its network of partner hospitals in India and newly created temporary medical facilities, is working to accommodate the surge of patients unable to receive medical care by providing ventilators, oxygen supplies, concentrators, medicines, medical therapies, and other diagnostic services. They are also providing PPE and other necessary supplies to healthcare providers and those displaced by the pandemic. In addition to the physical support,  volunteers  are supporting the silent victims of the pandemic, the families of the afflicted, by providing hot meals and more importantly comfort and emotional support. Roughly 30 oxygen concentrators have been delivered to India from the U.S., and BAPS Charities is in the process of sending 150 more. “