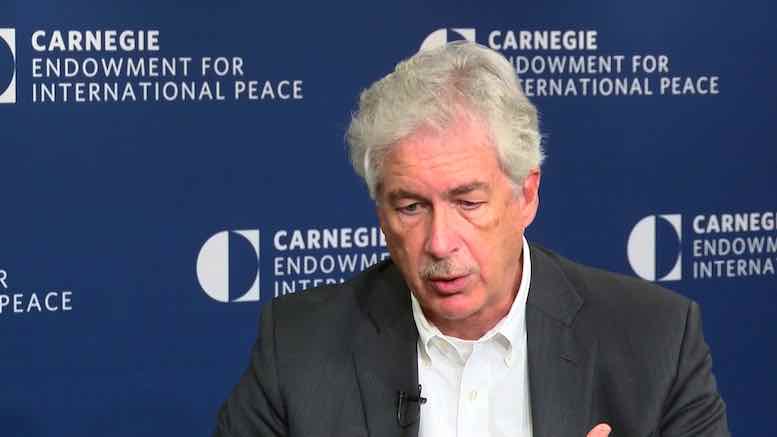 US President-elect Joe Biden has named William Burns, a diplomat who currently heads the liberal think-tank Carnegie Endowment for International Peace, as his new CIA Chief.

Burns has in the past criticised the abrogation of Article 370 which ended the discrimination meted out to Jammu & Kashmir’s minority population, and the new CAA law introduced to offer refuge to persecuted Hindus and other minority refugees from Bharat’s neighbours as instances of ‘harsh Hindu majoritarianism’. He has also claimed PM Modi’s leadership has ‘eroded’ Bharat’s democracy and is ‘testing India’s democratic guardrails’.

“A battle for the idea of India is under way, between the tolerant constitutional convictions of its founders and the harsher Hindu majoritarianism that has lurked beneath the surface,” he wrote last year in an article in The Atlantic magazine, around the time of Donald Trump’s visit to Bharat, echoing the thoughts of vicious anti-Hindu and anti-Modi propagandists like The Wire editor Siddharth Varadarajan.

In more evidence that Burns believes everything he reads or hears from Hindu-baiters, in the same article he criticised Modi and the BJP for feeding “tensions over disputed religious sites” and “pressures against critical journalists and academics”. But behind such wordsmanship remain hidden simple facts – the dispute over the afore-mentioned ‘disputed religious site’ was finally settled in favour of Hindus by the nation’s apex court after a torturous decades long legal process. The most egregious example of harassment of a critical journalist in recent times has came from the state of Maharashtra, not ruled by Modi or BJP, but by a ‘secular’ regime.

But after ravaging Modi and Hindus, Burns proceeded to apply some salve in true globalist fashion – he acknowledged that outsiders cannot resolve Bharat’s issues and that he ‘continue to believe strongly in the wisdom of the strategic investment that America and India have made in each other’s success over the past two decades’. He also recalled his role in ‘completing the US-India civil-nuclear dealing the summer and fall of 2008.’

Burns was also executive secretary of the State Department and special assistant to then Secretaries of State Warren Christopher and Madeleine Albright, and minister-counselor for political affairs at the US embassy in Moscow. The veteran diplomat has served five US presidents (both Democrats and Republicans)

Burn’s appointment comes as no surprise given that Biden himself has taken a similar line on CAA, Article 370 and other Bharat-related issues, egged on as he is by Indian-American Democratic leaders like Kamala Harris, Pramila Jaypal, Ro(hit) Khanna who share the discredited Congress-ecosystem mindset, and by Muslim lobbies and leaders like Ilhan Omar who have managed to push their pro-Islamist agenda very effectively.

How the Biden administration balances such anti-Hindu positions while trying to counter the rise of China by allying with Bharat, remains to be seen. A recently declassified US strategy document for the Indo-Pacific framed in 2018 recommended that US should ‘accelerate Bharat’s rise with action on several fronts to counter China.’ Bharat-US ties had advanced significantly under Donald Trump with many defence agreements signed, and progress in formalization of Quadrilateral Security Dialogue or Quad, a group of four democracies namely Bharat, Australia, Japan and the USA. Whether the same strategic direction will be maintained under a Biden administration, or we will see anti-Hindu tropes dictate a more hectoring engagement with Bharat, remains to be seen.

Burns is not alone in drumming up the ‘India needs to guard against Hindu majoritarianism’ line. Ashley Tellis, an India-origin US analyst long considered our ‘friend’ had also sounded a similarly menacing warning last year when he wrote – “Many Western powers aided India’s ascent, presuming that it would not misuse its power against its own citizens. Yet a recent wave of illiberal policies has eroded this confidence.” Tellis is Tata Chair for Strategic Affairs and a senior fellow at the Carnegie Endowment for International Peace.

Yes, you read that right – we are told that Western powers have ‘aided’ Bharat’s ascent. If only, such analysts would have the integrity to speak of British colonial loot which was responsible for Bharat’s descent. Or to admit that USA and other Western nations have engaged with Bharat strictly in pursuit of their national & geopolitical interests. Wasn’t it US President Nixon, egged on by his America-first advisor Kissinger, who sent the US Navy’s 7th fleet into the Bay of Bengal to threaten Bharat during the 1971 war to liberate Bangladesh? That Bharat was forced to launch this war to end the terrible genocide by Pakistan Army of Hindus and liberal Bengali Muslims in East Pakistan was ignored by America, despite a memo about the slaughter being sent by Archer Blood, the American Consul General in Dhaka.

What about the supply of weaponry and funds to a terrorist-state like Pakistan, which continues to this day? And let’s face it, no American corporate or MNC has to come to Bharat out of some desire to “aid India’s ascent” – they outsource because of Bharat’s talent pool, and set up shop in Bharat to sell their goods to one of the fastest-growing markets in the world.

Have we ever heard any American diplomat talk about harsh Islamic theocracy, which is a fact not just conjecture, while talking about Bharat’s neighbours like Pakistan or Bangladesh? Will they ever acknowledge that Hindus lack equal rights in their homeland, and are severely disadvantaged compared to minorities when it comes to managing their religious and educational institutions?

Burns appointment as CIA chief should not be taken lightly by Bharat’s security establishment. We could very well see the abetment of more Shaheen Bhagh style protests, ratcheting up of foreign-funded civil society ‘dissent’ and other acts to destabilize the country unless it makes the ‘correct’ democratic choices and toes the Western establishment elite line. An attempt at ‘sudden removal’ of Modi from the political scene as has been long desired by likes of Karan Thapar, cannot be ruled out.

It will not be an exaggeration to say that BreakBharat/BreakingIndia forces have just got a new lease of life.