Are Hindu Dharma Gurus too naive about Christianity and Islam? 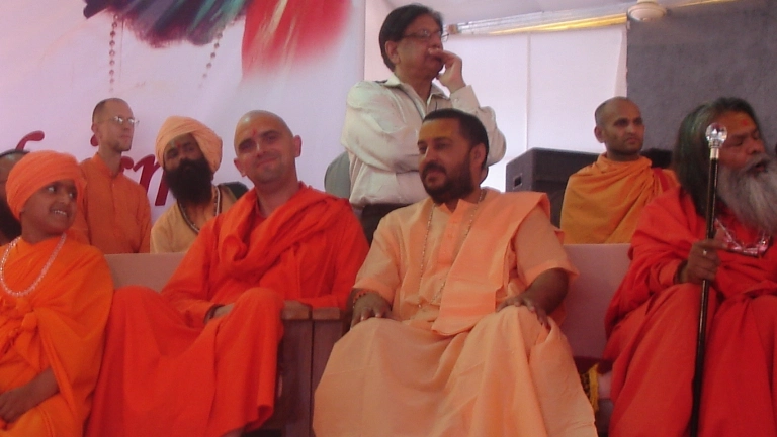 There are several major differences between Christianity and Islam on one side and Hindu Dharma on the other, and all of them are in Hindu Dharma’s favor. Yet, one difference plays out as an advantage for the Abrahamic religions and it could easily be avoided: It is the behavior of Gurus and Swamis as opposed to the behavior of the clergy of the two Abrahamic religions.

Hindu gurus might have been ignorant about this goal. Yet, by now they must have realized that by not exposing the unacceptable, unproven claims of those two supremacist religions about the biased, even cruel nature of the Supreme Being, about their ‘divine duty’ to dominate the world and about the “despicable nature of idol-worshipping Hindu Dharma and Hindus, who will be thrown into hellfire”, is now harming Hindus badly and may haunt the Hindu representatives that they didn’t do their dharmic duty.

All this while, the Muslim and Christian clergy in Bharat talked little about their own religion but a lot about how bad Hindu Dharma and Hindus are. Swami Vivekananda was right when he said that every convert is not only one Hindu less, but one enemy more.

This enmity towards Hindus was in painful display in the international media, of the Bhoomi Pujan for the Ram Mandir in Ayodhya recently. The reports were incredibly cynical, arrogant and unfair towards Hindus and Prime Minister Modi especially. And of course they quoted Bharatiyas, like Rana Ayyub, to give their reports the stamp of ‘authenticity’.

I read some articles in the German media. Deutsche Welle didn’t even mention that a temple had been destroyed 500 years ago on which the Babri mosque was built. FAZ mentioned it half-heartedly that the ‘great’ Mogul emperor had demolished “one of their temples” to build the mosque. All reports insinuated that the building of the Ram Mandir will lead to an intolerant if not fascist Hindu nation and will aggravate the oppression of the Muslims in Bharat, ‘which has already started with Muslims having been lynched’.

How do they dare to put Hindus in such bad light, when they had patiently waited for a court verdict to get back only one of the over 40,000 temples which were destroyed by Muslims? When they are the most open-minded community probably the world? A community which gave refuge to all who were prosecuted – Parsis, Jews, Tibetans, even Syrian Christians who later back-stabbed their generous Hindu hosts.

Maybe the reason is that for too long missionaries and evangelicals had already prepared the ground. They knew that Hindus won’t take an aggressive stand when attacked and demeaned because many of them are themselves confused and are not sure what Hindu Dharma is about.

Unfortunately, the Hindu clergy never challenged Christianity and Islam. The claim by Christianity and Islam as being the “only true religion” was never questioned, even though Bharat has an ancient tradition of highly intellectual debates on truth and two separate religions cannot be “only true”. Further, the ONE cause of the universe cannot be a separate entity who is so hateful towards the majority of human beings that he will throw them into hell forever. Forever?

Yet ridiculing Hindu Dharma and bashing Hindus and especially Brahmins has become the norm in mainstream media. It was largely ignored by Gurus and Swamis with the attitude “Hindu Dharma does not become bad by calling it bad”. This is true of course, but it can be debated if this is dharmic behavior or maybe cowardice.

However, there is some hope. Hindus are much more aware now and the blatant vilification of only Hindus and the inexplicably protective attitude towards Muslims doesn’t go down well any longer with many common people including in the West.

(This article was first published on the author’s blog on August 12, 2020 and is being reproduced with permission, after minor edits to conform to HinduPost style-guide)