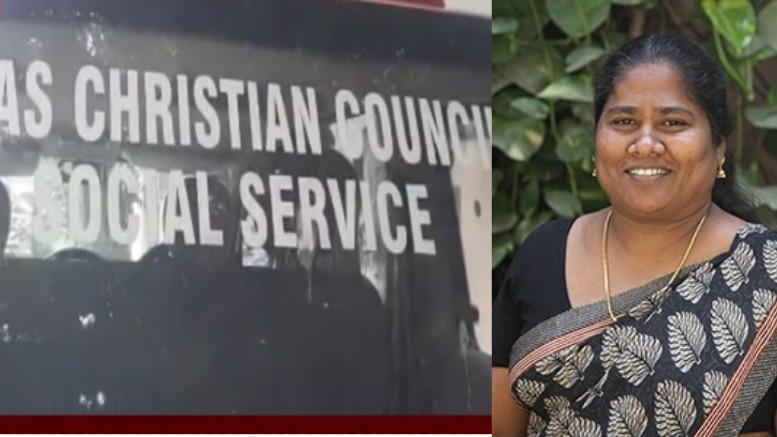 A shocking incident of a Child Welfare Committee member abetting sexual assault on victims of trafficking has been reported from Tamil Nadu. Isabel Richardson, the CWC member has been arrested and police are on a hunt for her brother Bennet Richardson who raped the victims. Both of them have been booked under POCSO.

Madras Christian Council of Social Service, the secular arm of Madras-Mylapore diocese of the Catholic church runs a so-called protection home for victims of trafficking in Chennai. 130 inmates are said to reside in this home. A 15 year old girl and a 20 year old young woman residing in the home were raped by Bennet Richardson, the brother of the home’s chief, Isabel Richardson.

Isabel is said to have helped Bennet stay at the home during the lockdown in violation of rules. The victims complained to the other functionaries of the home and based on that Isabel was sacked from her post and arrested by the police. The shocking detail in this specific incident is that Isabel Richardson is one of the members of the district Child Welfare Committee.

Isabel is said to have run the home for the past 15 year. However files having basic details about her have been deleted from the archives and CCTV records are available for the last 6 days only. Suspiciously many digital files were found to be wiped out as well. While the internal committee of the home held Bennet as a culprit it left out the part played by Isabel. The committee suggested disciplinary action against Isabel and a police complaint against Bennet. However CWC members have registered a complaint on both based on which Isabel has been arrested.

Apart from that she is also the CEO of Madras Christian Council of Social Service, founded by Lesley Newbegin, the then bishop of Madras-Mylapore diocese in 1965. It was formed as a common platform for all the Christian denominations to come together. MCCS runs various programs which include a women development program with economical support from the Ministry of Women and Child Development in centre, a family counselling centre, a children’s and senior citizens home and a short stay home for women funded by the Central Social Welfare Board.

The members of the MCCS committee include 7 Christian pastors. 7 members of the committee are chosen from churches while other 4 members are elected from Christian NGOs. The home appears to be effectively being run by Christian priests which explains the crimes happening there. While the Ministry of WCD may have to rethink on funding faith-based institutions, it also has to draw severe rules for appointment of the members of CWC.

Even though it falls under the ambit of the Ministry of WCD, a department of the central government, the responsibility of appointing CWC members falls on state governments. The structure needs to be revamped as such incidents are increasing. In June the chairperson of CWC, East Singhbhum district in Jharkhand was arrested for abetting sexual abuse and rape by her husband and son in the home run by the family. The National Committee for Protection of Child Rights has conducted studies in many orphanages which revealed that many such homes are run for profit and religious conversion is taking place in them. Unless our children and women are protected from such vultures the doomsday predictions about the fall of Sanatana Dharma in Bharat is imminent.

Abused, humiliated and vilified in CWC meet after the 2020 letter: Azad