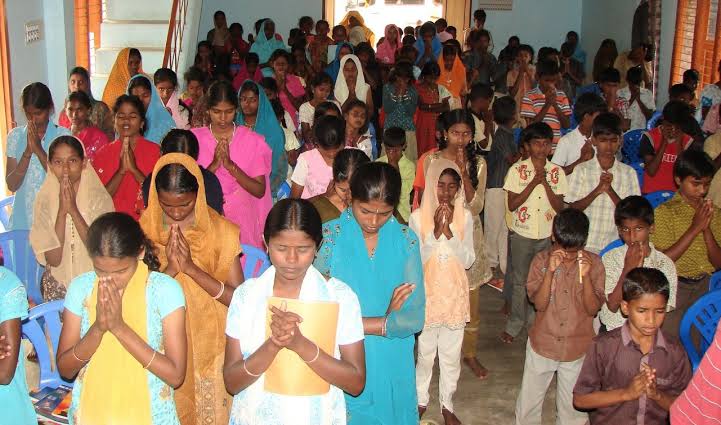 A shocking incident of missionaries trying to scare a 7 year old child into conversion has come to light. In Modakurichi, Erode, TN, an assembly constituency where BJP candidate Dr.CK.Saraswathi won despite all odds, parents of a small girl aged 7 filed a complaint in the local police station after the child confessed to them that 2 women have been compelling her to convert to Christianity.

The girl was approached by two women Usha Rani and Virginia in the neighborhood who asked her to come to their church and convert to Christianity. When the child didn’t budge they took to scaring her by saying that her parents would fall ill and die and that she would be possessed by the ghosts. They also took her to the church in the neighborhood and compelled her to convert. When the threats and compulsion started distressing the girl she confessed about it to her parents.

Shocked by this, the parents with the help of Hindu Munnani filed a complaint in the local police station against the two women. Last year in October a similar complaint was filed against two government school teachers when they tried to convert their students in the same constituency. Books, pamphlets, CDs and play things propagating Christianity were found in their desks. After coming to know of the conversion attempt from their children the parents approached local BJP and Hindu Munnani cadre who helped them file the complaint. Later departmental action was taken on the two teachers one of whom was the Head Mistress of the school.

In the current incident, Hindu Munnani and BJP cadres have revealed in SM posts that the 7 year old girl was lured to the church in the pretext of a sports event. Such incidents of luring children in the pretext of free tuition, summer class, etc is on the rise and many children are becoming victims of religious conversion and other side effects of it like physical, mental and sexual abuse. In one such incident, a 13 year old tribal girl, in Tiruvannamalai was abducted by a Christian priest from her hamlet a few months ago. The priest stayed in the hamlet saying he was there to do ‘social service’.

He allegedly conducted tuition for children of the hamlet as they were home due to Covid-19 induced lockdown. When the parents heard about the priest being inappropriate with the children they stopped their children from attending his tuition. However he managed to brainwash the 13 year old girl and abducted her and could be found only after intense search for months as the priest’s sister helped him hide. Such incidents marr the mental peace of the children and become a blot in their life. It is especially concerning as girl children are specifically targeted. Even though Hindu organisations are adept at reacting to such situations, it is necessary to educate our children about such issues and prevent them from being trapped by missionary vultures.