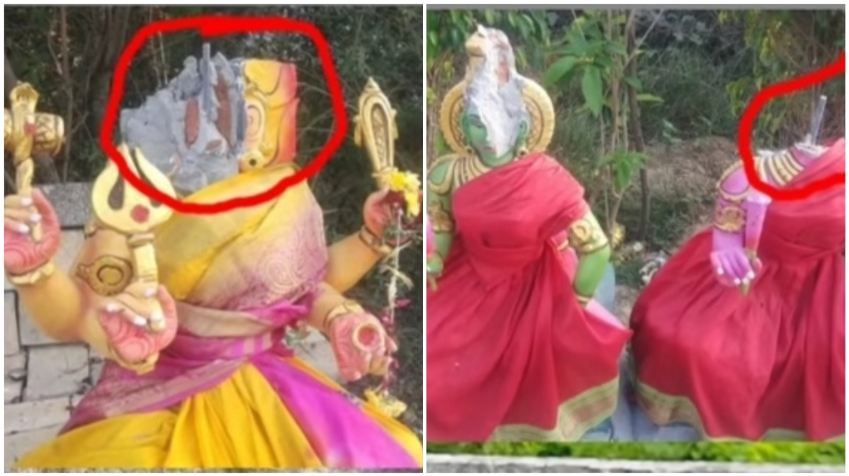 An ex-armyman has made serious allegations about missionaries and Dravida Munnetra Kazhagam (DMK) party men colluding to sell a property worth 500Cr and destroying a temple in the process. Santhanam, an ex-Armyman has been legally fighting to reclaim a temple of Vana Bhadrakali Amman from missionaries and DMK. He was interviewed by Madan Ravichandran, a journalist, to bring out the details of this issue. He has revealed how from local councilor to district collector everyone was involved in destroying the temple.

Santhanam has been legally fighting DMK functionaries and Christians to retrieve a property worth 500Cr located in a village Agaramthen in the outskirts of Chennai. Agaramthen comes under the newly formed Chengalpattu district and is located in St.Thomas Mount revenue block. It is pertinent to note here that Hindus still know and call it as Parangi Malai, a hill where Bhringhi rishi is believed to have meditated. It was renamed as St.Thomas Mount after Christians encroached the hill with a claim that St. Thomas, who never set foot in Bharat as per the Pope’s clarification, lived and preached in the mountain.

Iniko Irudaya Raj, a prominent Christian DMK politician claimed that late CM and DMK supremo MK.Karunanidhi helped change the hillock’s name to St.Thomas Mount. It is alleged that the property in question has been encroached and sold using fake pattas. In the property a temple for goddess Vana Bhadrakali Amman was located. In 2018, 24 murtis worshipped in the temple were vandalised by DMK councilors and missionaries in the middle of the night as per Santhanam’s claims.

A case was filed regarding the incident in the local police station. The serving Revenue Inspector(RI) was one Charles and local councillor, one Venkatesan. Santhanam claims that Venkatesan and his whole family are converted Christians and that everyone knows that they regularly go to the church. Apart from this one David Wilson who is a close relative of Nagercoil DMK MLA Mano Thangaraj is also said to be involved in this issue. This MLA was recently chased away by Hindus when he brought people belonging to other faiths and tried to celebrate ‘Equality Pongal’ in a temple in Kanyakumari.

Santhanam alleges that all these people conspired to sell 5 acre land out of 14.5 acre in the midst of which Vana Bhadrakali Amman temple is located. He says that half of the 500Cr worth property has been encroached and the temple was destroyed to sell the remaining as well. Even though it has been brought to the notice of the police no action has been taken so far. A week after the incident took place RI Charles went to the spot for ‘evaluation’.

Santhanam alleges that RI Charles infact came to destroy the remnants of the temple to destroy the evidence pointing to the existence of the temple in the name of evaluation. This 14.5 acre property wasn’t claimed by anyone when the land rights act, 1964 was introduced and thus went to the government. Vana Bhadrakali Amman temple is said to have been constructed in a 90 cent piece of land in this property. No one knew till then that it was government property. Only when the temple was destroyed and RI Charles came to evaluate the land saying it belongs to the government did everyone come to know of the truth.

They’ve destroyed the temple and the murtis in it saying that it is encroaching government property. But they didn’t remove the other structures encroaching the same property. Among those is a school, Lydia Matriculation School, run by MLA Mano Thangaraj’s close relative. This school is run by Lydia Charity and Education Trust and the person owner of the school is a missionary, Santhanam claims. True to that the school’s vision reads, ‘Our educational endeavours aim at forming leaders who are intellectually competent, spiritually mature, morally upright, psychologically integrated, physically health and socially acceptable who will be champion for the cause of justice, love, truth and peace.’ and their motto ‘Prayer Brings Success’.

These people conspired together with the converted councilor Venkatesan to sell the land illegally. Santhanam, a devotee of Vana Bhadrakali Amman filed a writ petition in the High Court to reclaim this property. The judges directed the tehsildar and RDO to either evaluate the whole property or to rebuild the temple.

But these officials didn’t touch the land that’s already been sold. They only evaluated the remaining land. Tehsildar Saravanan is said to have informed that the district collector said that the temple land couldn’t be given back. Now the shocking information is that the collector also turned out to be a Christian, John Louis. So the entire temple and its remnants were totally wiped off thereafter. Yet there was a small Naga Devata murti that people were worshipping by lighting a diya around which there was no solid structure. Even this was not spared and a special task force of around 20 policemen was deployed to remove the murti. Everyone from Assistant Commissioner to Revenue Inspector were physically present to supervise the removal of the murti as per Santhanam’s account.

Santhanam laments that a collector who has to be secular while imparting his duties had taken such an action with venom. It is astounding to many that from ward councillor to district collector, everyone is a Christian. Santhanam says that when he approached the police, they wondered how could a Hindu destroy a temple. But he claims he has evidence to prove that these people are indeed Christians and approached many officials to take action against them. Councillor Venkatesan who is a DMK functionary is said to have threatened Santhanam with murder. Santhanam has filed complaints with the district collector, assistant commissioner, joint commissioner and he even wrote to the PMO and Home Secretary with no result.

This councillor Venkatesan is said to be in prison for faking the documents of a Christian’s property and selling it illegally. Allegedly there are two land grabbing cases on him. Apparently, DMK appeases minorities for politics but their men don’t care about religion when it comes to land grabbing. Yet DMK and the missionaries indulge in encroaching properties together regardless of their ideology.

Santhanam further alleges that Venkatesan threatened him asking to drop the case or he would gather 1000 Christians and create communal unrest. Santhanam has submitted the recorded audio of this threat but police hasn’t been forthcoming in verifying its authenticity and proceeding further even after 2 years. He says, in Kaspapuram, the village where he lives, there are 18 prayer houses operating without permission. The High Court has ruled that any place of worship shouldn’t be established without permission and especially houses, shops and other such buildings shouldn’t be used as places of worship. Yet these 18 prayer houses are operating in violation of the ruling.

While the temple was demolished citing that it lies on government land, 3 churches built on squatter land still exist and flourish. They couldn’t tolerate a half feet murti being worshipped and removed it citing illegality but the 50 houses built on the 5 acre property are untouched. These houses are said to have been sold for INR 1 crore per house. “How could the RI or his higher officials be ignorant of this fact?” Santhanam questions. He warns that Hindus being neutral and not recognising the threat of missionaries and political parties like DMK would cause the community to be wiped out like in Kashmir where he saw land grabbing and the revenue from it aiding the terror and communal activities to drive out Kashmiri Pandits.

The Hindu community is building a new temple at a different place now. But Santhanam says that the issue cannot be left alone as Christians couldn’t see a half feet murti being worshipped by Hindus in a peaceful manner and deployed every official in their fold to get rid of it. So it needs to be seen through, the property retrieved and a Navodaya school be built on the same premises, he demands. For such a serious issue to have happened so close to the state capital shows how vulnerable Hindus can be anywhere when Abrahamics are at power centres occupying official positions.